Georgetown, DE – Governor Jack Markell, Department of Correction administrators, and representatives from Delaware Technical Community College yesterday celebrated the graduation of 10 offenders from the Sussex Community Corrections Center (SCCC) who completed the culinary program offered at its newly renovated training facility.  That facility and certificate program were established as part of the Markell administration’s focus on reducing recidivism through a series of criminal justice reforms, including the expansion of reentry resources, better coordination among agencies to connect offenders to existing services, and the creation of skills training for offenders to better position them to secure and maintain employment when they return to the community. 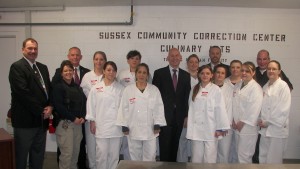 This fall, the Department of Correction and Delaware Tech joined together in a partnership that places chef instructors into SCCC’s culinary training facility to provide offenders with classroom instruction and hands-on skills in its commercial-grade kitchen.  Today marked the graduation of the second class that has completed the three-week introductory course that focuses on food safety and basic food preparation techniques.  All graduates earned the nationally-recognized ServSafe food certification and Delaware Tech’s Commercial Kitchen Safety Certification and are now eligible to continue training opportunities through more advanced community-based culinary courses.

“We all believe in you, and we hope that you will believe in yourself and go on to do great things,” Governor Markell said to the graduates.  “We want to set people up for success, and the fact that you have invested your time in this program and have taken an interest in learning new skills indicates your determination to pursue a productive path for your lives.”

“We’ve been working for the past year with the Department of Correction to identify potential programs for offenders who are close to release so that we can provide them with training in four to eight weeks that can lead directly to employment,” said Delaware Tech’s Owens Campus Director of Workforce Development and Community Education Christopher Moody. “The success we’ve experienced with the Commercial Kitchen Safety Certificate training has motivated us to move forward with additional programs like the small engine repair training that will begin in January.”

Department of Correction Commissioner Robert Coupe noted that a career in the culinary field can be fulfilling and that it will connect each new graduate to many significant events in other’s lives.  “Through your work in this industry you will be a part of the lives of so many people who visit restaurants to celebrate birthdays, anniversaries, and other special occasions,” he said.  “While you may not know many of your customers, through the magic of food and its ability to bring people together you will play a role in creating many memorable and cherished moments.”

During Thursday’s ceremony, Markell recognized SCCC Warden William Oettel and his team for expanding skills and occupational training programs for offenders and for demonstrating that they can be established cost-effectively.  All funds used to complete renovations to the culinary training facility, purchase its equipment, and pay for the culinary instruction have been generated on-site; no taxpayer dollars were used.  Coupe also recognized the late Matt Haley, founder of Delaware restaurant group SoDel Concepts, for his inspiration, personal support of early culinary training courses at SCCC, and his donation of several pieces of kitchen equipment used by culinary program students.

Over the past year the Department of Correction has partnered with educational institutions and non-profits across Delaware to offer more than a half-dozen certification programs to offenders who are supervised at the DOC’s work release and violation of probation centers.  Most recently, in addition to the 10 offenders who graduated from yesterday’s culinary training program, this week 25 offenders from Wilmington’s Plummer Community Corrections Center received industry certifications through an occupational training program also established in conjunction with Delaware Tech.  Nearly 100 offenders have enrolled in certification programs this year, and the programs will be offered to increased numbers of offenders in 2016.