State of the State Address: Guests of Governor Markell

Dover, DE – Governor Markell delivers his annual State of the State Address today at 2:00 p.m. in Legislative Hall before members of the General Assembly, Cabinet members, and fellow Delawareans.

In addition to looking ahead to priorities for this year, the Governor will reflect on progress the state has made by “expecting more” during challenging times over the past seven years. Our series of one-page fact sheets covering a range of areas can be found here.

Several special guests who represent topics covered in the speech will attend at the invitation of Governor Markell.  These Delawareans serve as examples of those who have secured marketable skills to thrive in the state’s new economy, secured the opportunity for self-sufficiency through state and non-profit services, and represented the best of selfless service to others.  These guests are introduced below.

Members of the media interested in learning more or interviewing these individuals following the Governor’s address should email Courtney.McGregor@delaware.gov or Jason.Miller@delaware.gov.

–Dawn Milnamow recently completed a 12-week computer coding course at Zip Code Wilmington through the Delaware TechHire initiative.  Less than six months ago Dawn was struggling to get a full-time job. Last month she was hired by JP Morgan Chase in an information technology position which nearly tripled her annual salary.

–Liza Bartle with Agilent Technologies represents private sector employers who have joined the Pathways to Prosperity Initiative, which places students with employers to learn valuable job skills that today’s employers need, from manufacturing to computer networking, health care, and culinary arts. Business partners are committing to increase the number of students who gain the opportunity to work directly with employers.

–Cheyenne Hinson graduated this past year as a certified nursing assistant through the Generation USA youth employment program, a training program facilitated by the McKinsey Social Initiative that serves unemployed and underemployed youth.  Through this training, Cheyenne has overcome the challenges of unemployment to secure a position in a Wilmington-area healthcare facility, and recently earned a promotion.

–Alisson Murillo Navas is among the more than 4,000 students who have received SEED scholarships at Delaware Tech over the past five years.  Alisson, who enrolled at Delaware Tech this past fall as a SEED student majoring in biological sciences, had a successful fall semester but lost her scholarship because she was one credit short of being a full-time student as she tried to juggle her academics with a part-time job.  Alisson remains enrolled in coursework and plans to continue her pre-med education after graduating from Delaware Tech. 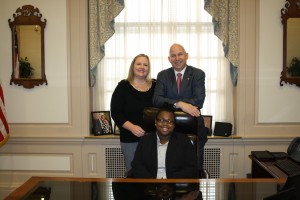 -During a 24-hour period beginning last Christmas Eve, Newark Police Corporal Marc Difrancesco personally responded to three separate reports of individuals found unresponsive because of an overdose. Through a change in Delaware law that allowed police to carry and administer the overdose-reducing drug naloxone, all three of those individuals were saved.

–Chief Warrant Officer Lloyd Massey and Master Sergeant Kevin Reading represent the hundreds of Delaware National Guard servicemembers who have deployed around the world during the past year.  Chief Warrant Officer Massey, a member of the Operational Support Airlift Agency, recently completed a deployment to the Horn of Africa and Master Sergeant Reading was stationed in Kabul, Afghanistan.

–Yashika Bailey is an Air Force veteran who had been facing homelessness and unemployment.  She has been able to land back on her feet through housing that she initially received through a local non-profit and an apartment she’s now renting with assistance from a government-sponsored housing program.  Yashika has also secured employment and is serving her state as a member of the Delaware Air National Guard.