State officials hope a new addition at the Blackbird Forest Education Center in Townsend will become a hive of activity as its occupants get busy as bees teaching visitors about the natural environment, the valuable role bees play in crop pollination and honey production, and how forests and flowering tree species can contribute to bee health and well-being.

National Pollinator Week takes place every June to address the urgent issue of declining pollinator populations. The event has grown into an international celebration of the valuable natural benefits provided by bees, birds, butterflies, bats and beetles.

Concern for honey bees in the U.S. is amplified by their crucial role in farming: honey bees are the main pollinators of many fruit and nut crops, and officials estimate pollination alone adds more than $15 billion in value to agricultural crops each year. In addition to pollination, bees produce products such as honey, wax, and royal jelly.

Delaware has about 270 registered beekeepers operating between 2,000 and 3,000 hives, many of whom are members of the Delaware Beekeepers Association. Each year, farmers bring in another 3,000 bee colonies to maximize crop pollination. Pollinated crops include watermelon, cucumbers, strawberries, cantaloupes, apples, blueberries, cranberries, squash and pumpkins.

In 2015, the Obama Administration unveiled the first-ever national strategy to promote the health of honey bees and other pollinators, which included recommendations from a task force’s pollinator research action plan. In January, Delaware Department of Agriculture (DDA) officials unveiled a draft Managed Pollinator Protection Plan at the 2016 Delaware Ag Week event in Harrington which outlined strategies and techniques to protect and enhance bee populations in the state. DDA is now reviewing comments received on the draft plan.

“One key aspect of the pollinator protection plan is to increase the amount of available forage for bees during the growing season. We’ve been working with the Delaware Nursery and Landscape Association, DSU and UD Cooperative Extension, and farmers to identify nutritious plants – ones with the nectar and pollen that bees need,” said Faith Kuehn, plant industries administrator for the Delaware Department of Agriculture. “The goal is to increase the acreage of these vital plants within the state.”

The draft plan includes best management practices that beekeepers, fruit and vegetable growers, and pesticide applicators can use to help pollinators thrive. It also includes strategies to increase the quantity and quality of pollinator forage on private and public lands.

For commercial and private beekeepers, Delaware agricultural officials have established BeeCheck, a voluntary program that helps beekeepers and pesticide applicators communicate and share information through a DriftWatch link so that state-registered beehives can be added to the DriftWatch map to prevent accidental drift of pesticides into sensitive sites through weather or wind patterns.

“We wanted to help our state’s beekeepers have more open communication with pesticide applicators, and vice-versa,” said Chris Wade, pesticides compliance administrator for the Delaware Department of Agriculture. “Expanding this tool to a wider group can only help both groups improve that dialogue.”

For the general public, experts also advocate limitations on pesticide use – especially during mid-day hours when bees and other pollinators are likely to forage. Other recommendations include planting species that are good sources of nectar and pollen such as red clover, foxglove, bee balm, joe-pye weed, and other native plants. (For more information, visit http://www.nappc.org.)

“We are happy to dedicate this new area near the Blackbird Forest Education Center as a permanent bee pasture and forage site. We plan to develop a curriculum for students and visitors to learn about the important relationship between bees and forests,” said Ashley Peebles, Delaware Forest Service trainer-educator.

The occupants of the new hives are European honey bees (Apis mellifera L.), which are not native to the United States but have been successfully naturalized on every continent except Antarctica; their earliest introduction to America dates back to 1622. The genus name Apis is Latin for “bee,” and mellifera means “honey-bearing,” referring to the species’ tendency to produce a large quantity of honey for storage over the winter. Experts believe honey bees evolved from species of predatory wasps that, instead of using other insects for food, eventually discovered that nutrition could be gathered from plants and flowers. In North America, honey bees must rely on the nectar and pollen gathered in the growing seasons of spring and summer to get them through the rest of the year.

Bees not only expand their numbers by making more bees but by also creating more colonies, a process known as “swarming” that usually happens in the spring. If a swarm is spotted, the public should call DDA’s Plant Industries staff at (302) 698-4500 for a list of swarm removal services.

In the honey bee colony, the labor system is divided among a small group: 1) the queen, who handles all reproductive functions and is the center of hive activity, 2) worker bees (females that gather nectar and pollen, build the comb, tend the brood, and make honey), and 3) drones (males whose role is to mate with the queen). While the queen does have a stinger, it is the female worker bees that possess barbed stingers to defend the hive, if necessary – at the cost of their own lives. 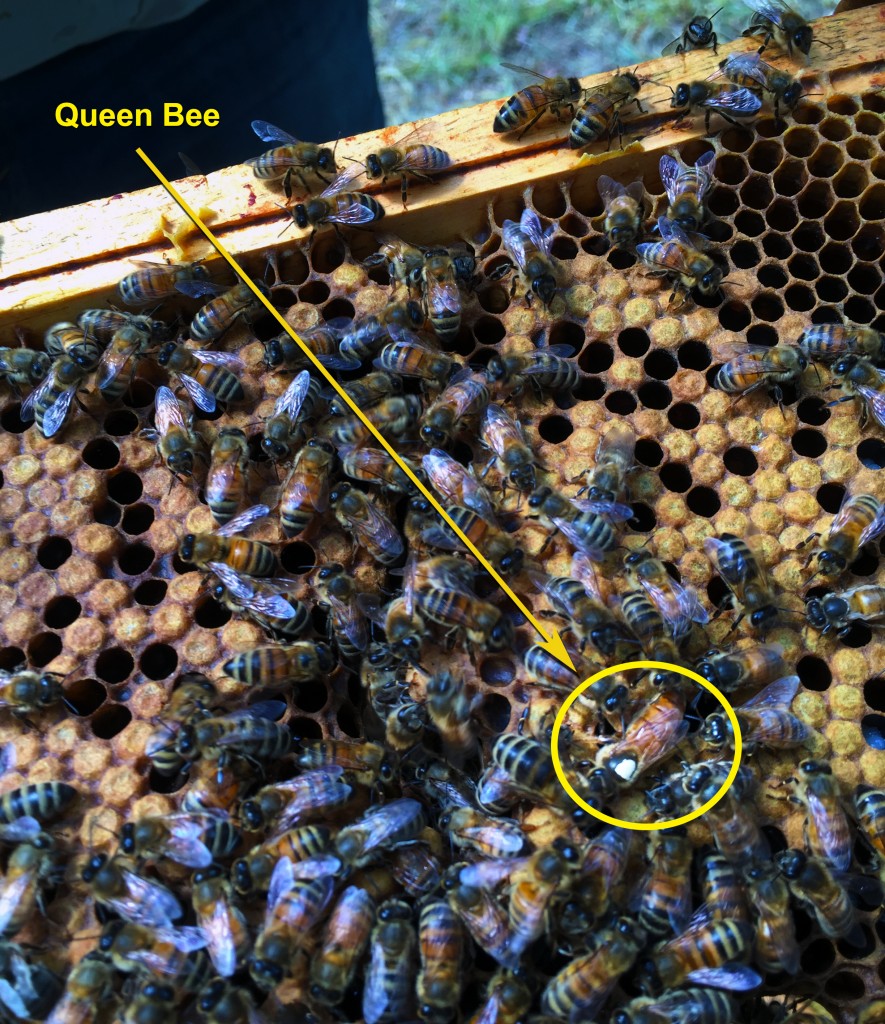 The Blackbird State Forest bee boxes, also called “supers,” were installed in mid-June near a small stand of sweetgum trees on the edge of a meadow on the appropriately-named “Meadows Tract.” Volunteers from Kent County 4-H clubs worked with Peebles and Planting Hope With Honey Bees Apiary, which is part of the Planting Hope Urban Farm at DHSS’ Herman Holloway campus in New Castle.

Construction of the new Blackbird State Forest hives was modeled on the design of the well-known Langstroth bee hive, originally patented in 1852. Crucial to the process are the two “nucs” or “nucleus colonies” – smaller colonies created from a larger one – each with its own new “queen.”

Each bee box was constructed with a “hive stand” on the bottom to keep the bees’ new homes off the ground. Above that are two “honey supers” – stacked one on top of the other – which contain 10 individual racks of “honey super frames” which will become the “combs.” The frames act as scaffolding on which bees will build their honeycomb, raise their “brood,” and make honey by gathering nectar and pollen from the nearby forest and flowers to feed the hive. The top layer holds the “feeder,” which is a jar containing a 50/50 mixture of sugar and water. The goal of the “feeder” is to jump-start the bee colony with enough nutrition to sustain them on the tasks of hive-building and honey production. The feeder will be monitored periodically to see if it needs replenishment. Officials expect that in early-spring, when most of the hives’ resources have been depleted by the long winter, another feeder with sugar water will be needed to get the hive through to the next foraging season.

At the very bottom of the hive is a narrow slit in the wood where bees can enter and exit the hive. New hives often feature a “reducer” that limits movement into and out of the hive until it can become well-established. At the very top of the box is a metal-plated wood cover to protect the feeder from being disturbed by outside forces or the weather.

Blackbird State Forest Education Center has numerous displays on forests and forest history, and features interactive exhibits on tree species, urban forestry, wildland fire, and an outdoor pond and educational trail. The center is open by appointment only from 8 a.m. to 4:30 p.m. and welcomes school groups, non-profits, and community organizations. For more information, contact Peebles at (302) 698-4551 or Ashley.Peebles@delaware.gov.