Wilmington, DE – Chairman Chu concluded a day-long visit to the First State as part of the 50th anniversary of the National Endowment for the Arts (NEA). Her trip included a tour at The Delaware Contemporary, Wilmington Creative District, The Grand Opera House, and the Biggs Museum of American Art.

“Thank you to the Delaware Division of the Arts for a meaningful tour of the state’s cultural community,” said NEA Chairman Jane Chu. “I saw first-hand how the Division is creating experiences that connect people through the arts, instilling beauty in their world, deepening their sense of place and purpose, transforming their communities, and drawing out their own inner creativity. You are proof of why art matters.”

The visit, held on November 1, began with a tour of The Delaware Contemporary led by teaching artist Nanci Hersh and a presentation with the NEA-supported artist-in-residence, Alma Sheppard-Matsuo. Matsuo is working with the Kingswood Community Center on a 4-month printmaking residency engaging youth in the exploration of folktales from diverse cultures.

Next, was a walking tour through the Wilmington Creative District led by Carrie Gray, Executive Director of the Wilmington Renaissance Corporation. The Creative District project received an FY 16 NEA Our Town Grant of $75,000 to support the design of pocket parks and passages in Wilmington. This tour included Senator Chris Coons (D-DE), Governor Jack A. Markell, Secretary of State of Delaware Jeffrey W. Bullock, and Democratic candidate for the Office of Mayor of the City of Wilmington, Mike Purzycki.

Then, Chairman Chu, Senator Coons, and Governor Markell gave remarks during the Town Hall meeting at the baby grand which was attended by over 150 guests. Chairman Chu spoked about the NEA’s 50th anniversary and took questions from the audience to learn more about how the arts play an important role in Delaware’s art community. 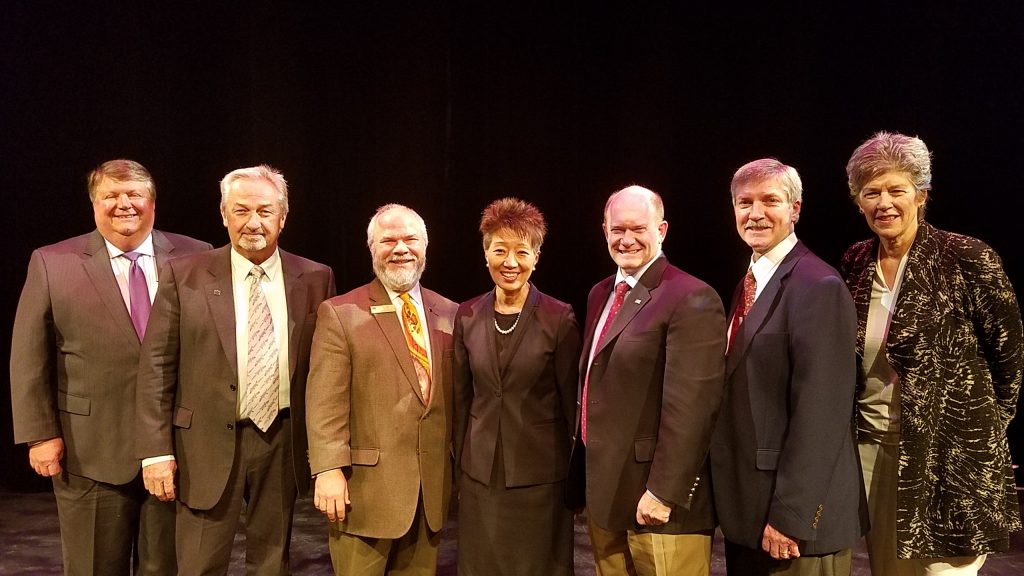 Later, Chairman Chu visited the Biggs Museum of American Art in Dover, which included a tour of its galleries and an opportunity for a public meet and greet with the Kent and Sussex County arts communities.

About the Delaware Division of the Arts

The Delaware Division of the Arts is an agency of the State of Delaware. Together with its advisory body, the Delaware State Arts Council, the Division administers grants and programs that support arts programming, educate the public, increase awareness of the arts, and integrate the arts into all facets of Delaware life. Funding for Division programs is provided by annual appropriations from the Delaware General Assembly and grants from the National Endowment for the Arts, a federal agency. For more information about the Delaware Division of the Arts, visit artsdel.org or call 302-577-8278.

About the National Endowment for the Arts

Established by Congress in 1965, the NEA is the independent federal agency whose funding and support gives Americans the opportunity to participate in the arts, exercise their imaginations, and develop their creative capacities. Through partnerships with state arts agencies, local leaders, other federal agencies, and the philanthropic sector, the NEA supports arts learning, affirms and celebrates America’s rich and diverse cultural heritage, and extends its work to promote equal access to the arts in every community across America. This year marks the 50th anniversary of the National Endowment for the Arts and the agency is celebrating this milestone with events and activities through September 2016.