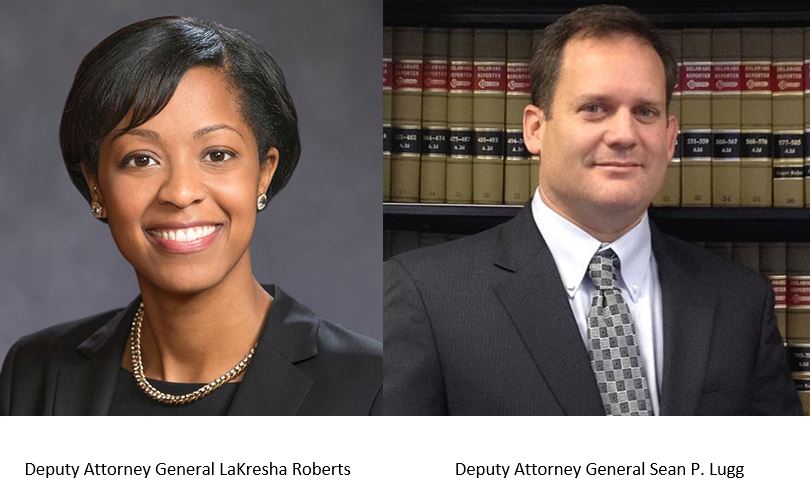 A graduate of the University of Delaware and Villanova University School of Law, Lugg has been with the Department of Justice since 1996. He currently serves in the Appeals Unit where he represents the State in appeals before all Delaware Courts. Prior to this assignment, Lugg worked as Delaware’s first Traffic Safety Resource Prosecutor and served as a supervisor and trial prosecutor in virtually every unit in the Criminal Division. Lugg has also represented the Department of Justice numerous times before the Delaware General Assembly.

“I’m proud to enhance our leadership team by moving LaKresha and Sean into these new roles,” said Attorney General Matt Denn. “I have been incredibly impressed with LaKresha’s performance as a manager, attorney, and representative of the department since I began working directly with her, and am confident she will be a terrific Chief Deputy. Sean has 20-plus years of experience in the Department, and working with our three excellent County Attorneys, I am confident that Sean will provide great leadership for the Criminal Division.”

Roberts takes over as Chief Deputy on January 9, 2017, when current Chief Deputy Danielle Gibbs goes to work for newly elected Governor John Carney as his Chief Legal Counsel. “I want to thank Danielle for the stellar work she did as Chief Deputy over the last two years,” Denn said. “Her extraordinary legal skills, patience, and sound judgment have been a great benefit to DOJ.”

Lugg assumes his new role as State Prosecutor on December 19, 2016, replacing Kathy Jennings, who leaves for a position as Chief Administrative Officer for New Castle County. “The Department of Justice is very grateful to Kathy for her service as State Prosecutor for the past five years, and we wish her good luck in her new position,” Denn said.