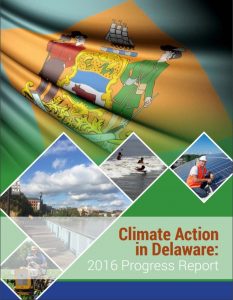 In 2013, Governor Jack Markell issued an Executive Order directing all state agencies to address the greenhouse gas emissions that drive climate change and to protect Delaware from current and future impacts. As a result, state agencies developed the Climate Framework for Delaware, which outlines more than 155 recommendations for reducing greenhouse gas emissions and adapting to rising heat and sea levels. Now, the state has released its 2016 progress report to update Delawareans on the state’s climate action.

“Our state has repeatedly proven that protecting our environment also protects and strengthens the health and prosperity of our citizens, communities and economy,” said Governor Markell. “We’ve taken important steps by investing in renewable energy, energy efficiency and cleaner fuels, moving toward our goal of reducing greenhouse gas emissions by 30 percent by 2030. We’re also making our low-lying state more resilient to sea level rise through projects such as dike and beach restorations.”

“The progress we have made must continue,” Governor Markell continued. “Together, we can continue to prepare for and mitigate the effects of climate change, supporting Delawareans’ health and safety, promoting economic opportunity and addressing one of the greatest threats to the future of our state, our nation and our planet.”

“This report highlights the progress we’ve made in areas including clean transportation, agriculture, energy use, public health and worker safety,” said DNREC Secretary David Small. “Under Governor Markell’s leadership, the collaboration among a number of state agencies has laid a solid foundation upon which to build future efforts to help Delaware adapt to and mitigate the impacts of climate change.”

Susan Love, Climate Section lead with DNREC’s Division of Energy & Climate, said that these strategies include partnering with local governments and engaging communities. “Climate change is a challenge that affects all of us, and it’s going to take all of us to meet it,” Love said.

The progress report also includes a comprehensive appendix detailing the progress of each of the Framework’s adaptation recommendations. To read the report, click Climate Action in Delaware: 2016 Progress Report.

To learn more about state actions and what you can do to help, visit de.gov/climatechange.