-Exhibit opening to include full day of colonial-era-themed activities-

(DOVER, Del.—Aug. 22, 2017)—“New Castle: Three Forts, One Community,” a new exhibit examining the 17th-century struggle for control of New Castle, Del. by the Dutch, Swedes and English, will open to the public on Saturday, Sept. 9, 2017 at the New Castle Court House Museum located at 211 Delaware St.in New Castle, Del. 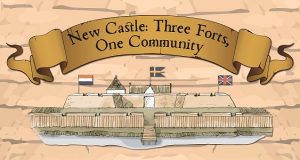 Between 10 a.m. and 4:30 p.m. on Sept. 9, the museum will celebrate the exhibit opening with a series of activities including Dutch and Swedish re-enactors and encampments; museum and exhibit tours; Swedish craft-activities for children; tours of what is believed to be the site of Fort Casimir; on-board tours of the Kalmar Nyckel, a replica of one of the ships that brought the first Swedish settlers to what is now Delaware; and Dutch-, Swedish- and English-style refreshments. Except for Kalmar Nyckel tours ($5), admission is free and open to the public. For additional information, call 302-323-4453.

About the three forts …

Modern-day New Castle traces its origin to the conflict between three great colonial powers—Netherlands, Sweden and England. From 1651 to 1681, these nations vied for control of the Delaware Valley and the profitable trade in natural resources with the region’s American-Indian inhabitants.

In response to the Swedish stronghold (Fort Christina) constructed at present-day Wilmington, the Dutch established a fortified settlement five miles to the south. For the next 30 years, the Dutch, Swedes and English would contest and occupy this outpost. Each nation would enforce its claim through a series of fortifications—Fort Casimir (Dutch), Fort Trinity (Swedish) and Fort New Castle (English).

These forts were an anchoring presence within the developing community and have not been completely lost to time. Archaeological excavations have found the site of Fort Casimir and recovered artifacts which are on display in the exhibit. To this day, the distinct cultural influences of the three colonial powers can still be found in New Castle.

“New Castle: Three Forts, One Community” was created by the Delaware Division of Historical and Cultural Affairs’ Collections, Affiliates, Research and Exhibits (CARE) Team working together with the staff of the New Castle Court House Museum. The exhibit will be on display for an undetermined period of time. Museum operating-hours are Tuesdays through Saturdays, 10 a.m. to 4:30 p.m.; and Sundays, 1:30 to 4:30 p.m. Admission is free and open to the public. For additional information, call 302-323-4453.

Constructed in 1732, the New Castle Court House is one of the oldest active court buildings in the United States and was Delaware’s first state capitol. Here, the Colonial Assembly passed the 1776 Separation Resolution creating the Delaware State. During its nearly 300 years of history, this landmark has played many pivotal roles in the political, social and commercial life of both New Castle and Delaware. Administered by the Delaware Division of Historical and Cultural Affairs, the museum is a partner site in the First State National Historical Park.