MISPILLION HARBOR – Against a backdrop of migrating shorebirds and spawning horseshoe crabs on the beach at Mispillion Harbor, DNREC Secretary Shawn M. Garvin was joined by U.S. Senators Tom Carper and Chris Coons, and Congresswoman Lisa Blunt Rochester to celebrate the completion of the Mispillion Harbor restoration. The three-year project restored the area in the wake of damage inflicted by a series of coastal storms including 2012’s Hurricane Sandy, and built resiliency against future storms impacting this vitally important habitat. Also joining the Secretary and the Congressional Delegation were U.S. Fish & Wildlife Service Northeast Regional Director Wendi Weber, and National Fish & Wildlife Foundation Vice President of Conservation Programs Eric Schwaab.

Who is in the Photo?
Located east of Milford within the Milford Neck Wildlife Area, Mispillion Harbor is globally significant for the high numbers of migrating shorebirds that stop there each spring to refuel by feeding on the eggs of spawning horseshoe crabs, with both species favoring the harbor’s sheltered sandy beaches and calm waters than other less-sheltered sites along Delaware’s Bayshore. Delaware’s Department of Natural Resources and Environmental Control (DNREC) led the task of restoring balance to this critical habitat, as well as planning the restoration of the surrounding Milford Neck tidal marsh, in partnership with the U.S. Fish and Wildlife Service (USFWS), National Fish & Wildlife Foundation (NFWF), The Nature Conservancy, and Delaware Wild Lands, with support from other conservation partners and local community members.

Federal funds totaling $5.8 million through USFWS and NFWF were paired with $2 million in state matching funds to complete restoration of Mispillion Harbor and to create a longer-term plan for restoring the integrity of Milford Neck’s marshlands and forest habitat.

“I want to commend everyone involved – the Congressional Delegation, the U.S. Fish & Wildlife Service, the National Fish & Wildlife Foundation, and all of our other conservation partners – for their support in bringing this important project to completion,” said DNREC Secretary Shawn M. Garvin. “Through this partnership, we have restored one of the Delaware Bayshore’s most extraordinary places. Mispillion Harbor can now continue to provide safe haven to migrating shorebirds, including the threatened red knot, and to the spawning horseshoe crabs whose eggs fuel their long journey, as well as drawing visitors from around the world to observe the vital interaction of these species.”

“The funding that the congressional delegation worked hard to acquire for Delaware projects after Hurricane Sandy not only saved this area, but saved a part of Delaware’s tourism economy,” said Senator Tom Carper, ranking member of the Environment and Public Works Committee in the U.S. Senate. “That money was put to good use. We didn’t just fix the damage, we created a long-term plan to mitigate damage from future storms. Some people say we can’t have a strong economy and healthy environment at the same time, but I believe this project is a great example of how we cannot have one without the other.”

“Delaware’s wetlands and coastal habitats are not only beautiful, they’re also unique parts of our ecosystem and critical to our economy,” said Senator Chris Coons. “In the wake of Hurricane Sandy, these wetlands were truly at risk, and I’m so proud of everyone at the state, federal, and local level who came together to protect the Mispillion Harbor Reserve, the Milford Neck conservation area, and all the creatures who call these places home.”
“This vital conservation project is a great example of steps we can take to restore ecological balance along our coast. With the completion of the Mispillion Harbor Restoration, horseshoe crabs now have a new beach to spawn their young, red knots have a place to refuel on their journey north, and Delaware is revitalizing its pristine coastline,” said Congresswoman Lisa Blunt Rochester. “It’s only through the continued efforts of local, state, and federal collaborators that we can both save endangered species and preserve the First State’s beauty for all to enjoy.”

In Mispillion Harbor, habitat restoration work began in 2016 and was completed this spring, including:

For the Milford Neck conservation area, hydrodynamic modeling, restoration alternatives, and a restoration plan were collaboratively developed by DNREC’s Division of Fish & Wildlife, The Nature Conservancy and Delaware Wild Lands, who collectively own 10,000 acres of Milford Neck, including the state-owned Milford Neck Wildlife Area.

“The success of this collaborative restoration effort has played out this spring on the shoreline of Mispillion Harbor, with horseshoe crabs spawning on the beaches and shorebirds eating their fill of eggs,” said Regional Director Weber, U.S. Fish and Wildlife Service. “This project truly exemplifies the power of partnerships. When we combine our investments, energy, and innovation to restore Mispillion Harbor and build a stronger Atlantic Coast, we can accomplish far more for wildlife and people than any single agency or organization can accomplish alone.”

In addition to supporting the recovery of the federally-listed threatened red knot by helping provide a stable food source for shorebirds in a protected area, and offering a safe haven for spawning horseshoe crabs, the work at Mispillion Harbor, Milford Neck, and associated navigable waterways also benefits local residents and visitors.

Restoration work to protect Mispillion Harbor and to maintain tidal flow through coastal marshes, supports local communities and enhances recreational and commercial boating and fishing access, as well as other outdoor opportunities in the area, including:

Restoration work planned for Milford Neck will expand on the benefits from the Mispillion Harbor restoration, further facilitating movement of storm and spring tide waters throughout the tidal marsh system woven into the area of Slaughter Beach, Milford Neck, Prime Hook National Wildlife Refuge, and other state and conservation partner-owned properties as well as residential and agricultural areas. 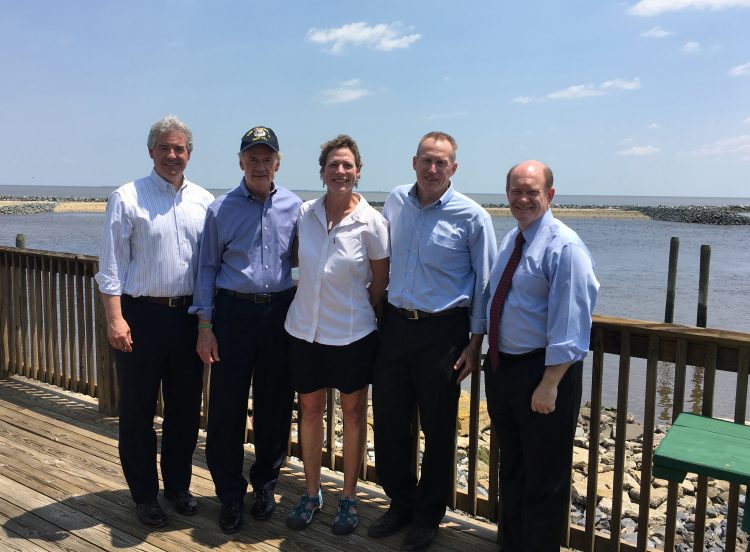