“An Immigrant Story: Crossing the Atlantic in a 17th Century Sailing Ship” at the New Castle Court House Museum

(DOVER, Del.—July 11, 2018)—On Wednesday, July 18, 2018 at 7 p.m., the New Castle Court House Museum, located at 211 Delaware St. in New Castle, Del., will present “An Immigrant Story: Crossing the Atlantic in a 17th Century Sailing Ship,” a program by New Castle’s own Jean Norvell who will discuss what life would be like for a two-month crossing of the Atlantic Ocean from Europe to the New World. Admission is free and open to the public. For additional information, call 302-323-4453.

As part of the program, Norvell will demonstrate the small spaces that were available for sleeping onboard ship, and how hard-boiled eggs were used to determine if meat was sufficiently ‘brined’ to be fit for consumption. She will also discuss how beer and wine were used to modify the drinkability of water, and the difficulties of basic hygiene and toileting during the voyage.

Jean Norvell was born in London, England and educated at London University with a major in English and a minor in theology. An Air Force wife, she travelled the world with her husband and during one three-year assignment in Japan studied garment design and pattern making. Prior to retirement, she worked in product development for W.L. Gore & Associates and has earned several patents for her inventions. She writes a bi-weekly column in the New Castle Weekly which focuses on the Penn family and 17th Century history in England and America. Her business—‘Bit of History’—is housed in a circa 1682 house reputed to be the home where William Penn spent his first night in New Castle.

Constructed in 1732, the New Castle Court House is one of the oldest active court buildings in the United States and was Delaware’s first state capitol. Here, the Colonial Assembly passed the 1776 Separation Resolution creating the Delaware State. During its nearly 300 years of history, this National Historic Landmark has played pivotal roles in the political, social and commercial life of both New Castle and Delaware. The museum is a partner site in the First State National Historical Park.

The New Castle Court House Museum is administered by the Division of Historical and Cultural Affairs, an agency of the State of Delaware. The division enhances Delaware’s quality of life by preserving the state’s unique historical heritage, fostering community stability and economic vitality and providing educational programs and assistance to the general public on Delaware history and heritage. The division’s diverse array of services includes operation of five museums which are accredited by the American Alliance of Museums, administration of the State Historic Preservation Office, conservation of the state’s archaeological and historic-objects collections, operation of a conference center and management of historic properties across the state. Primary funding for division programs and services is provided by annual appropriations from the Delaware General Assembly and grants from the National Park Service, Department of the Interior, a federal agency. However, the contents and opinions expressed in the division’s programs and services do not necessarily reflect the views and policies of the Department of the Interior. 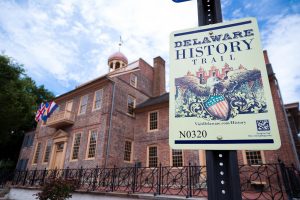