DOVER, Del. — Emerald ash borer (EAB), a destructive insect from Asia that attacks and kills ash trees, has been confirmed at two new sites in Delaware: one near Middletown, New Castle County, and another near Seaford, Sussex County. Originally found in northern Delaware in 2016, the new detections create added urgency for homeowners and municipalities to determine if they have ash trees on their property and decide on possible management options. Current guidelines recommend the removal or treatment of ash trees if located within 15 miles of a known infestation. Because Delaware is geographically small and EAB can go undetected for years, residents are urged to educate themselves now and take action.

“These new detections broaden the areas that we are interested in, but it doesn’t really change our scope of work. Since the first detection in 2016, we have been recommending that property owners within a 5 to 15 mile radius of a positive detection treat trees that they want to keep, or to remove trees if necessary to protect their property and to help limit the spread of the emerald ash borer” said Stephen Hauss, DDA Plant Industries Environmental Scientist II. “USDA’s proposal to end the quarantine regulations does not mean that we stop caring about EAB. We still have not found EAB in Kent County, so we will continue surveying and taking tips from the public.”

For the latest information from Delaware’s Department of Agriculture, residents can go to de.gov/ashtrees for an EAB Fact Sheet and an Ash Treatment Decision Guide.

“Now is the time to be thinking about removing and replacing ash trees, something we’ve been recommending for some time. We’ve been anticipating EAB for many years, but these latest detections show EAB’s spread throughout our state,” said Kesha Braunskill, Delaware urban and community forestry program director. “If a particular tree or trees are highly valued by the property owner, chemical treatment may be an option, otherwise removal and replacing ash with a suitable species is our recommendation.”

Emerald ash borer (Agrilus planipennis) has now been confirmed in 35 states, the District of Columbia, and five Canadian provinces. The USDA’s Animal Plant and Health Inspection Service (APHIS) estimates that the insect has killed millions of ash trees, caused agencies to implement extensive federal quarantines, and cost hundreds of millions of dollars to municipalities, homeowners, nursery operators and forest product industries. For a comprehensive history and overview of EAB, read the Emerald Ash Borer Story Map.

The failure to stop EAB through regulatory controls prompted APHIS to propose removing its domestic multi-state quarantine for emerald ash borer on September 19, 2018, with public comments accepted through November 19. In its Fact Sheet on the proposal, the agency said it plans to allocate resources currently used for quarantine enforcement for “biological control agents for emerald ash borer, which would serve as the primary tool to mitigate and control the pest.” 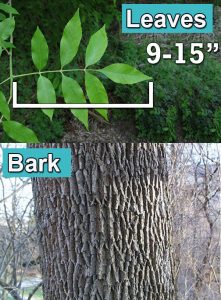 By all accounts, EAB has been a devastating insect responsible for the widespread decline of ash trees (Fraxinus spp.) in both rural and urban areas in the United States. Ash is a hardwood tree traditionally used for making baseball bats and its high heat value also makes it ideal for firewood. Because of the danger of humans inadvertently spreading EAB,  the “Don’t Move Firewood” campaign was developed to urge people to not move firewood, “buy it local,” and if they “bring it, burn it.”

Ash is identifiable by its compound leaf with 5 to 9 leaflets arranged opposite each other. Ash trees are also one of the trees (along with maple, dogwood, and horse-chestnut) that feature an opposite branching pattern. Symptoms of an EAB infestation can be difficult to notice at first, but usually include: canopy dieback, epicormic sprouting, bark splits, woodpecker damage, and D-shaped exit holes on the bark. Adult beetles feed on ash leaves but actually cause little damage. However, EAB larvae (the immature stage) feed on the inner bark of ash trees, disrupting the tree’s ability to transport water and nutrients and killing the tree in just a few years.

The Delaware Forest Service estimates that ash makes up only about two percent of the total tree species in the state, however some communities near urban areas have a higher percentage of ash and could be more adversely impacted.