(DOVER, Del.—March 19, 2019)—Beginning on April 4 and continuing each Thursday in April 2019, The Old State House, located at 25 The Green in Dover, Del., will present four fun and thought-provoking Constitutional programs as part of its sixth annual Coffee-Hour Lecture Series entitled “The Rising Sun: The U.S. Constitution.” 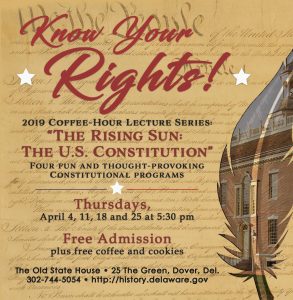 The series is designed to provide stimulating programming for audiences who have just left work for the day. Lectures will take place between 5:30 and 6:45 p.m. Admission is free and open to the public with complimentary coffee and cookies available for those in attendance. For additional information, call 302-744-5054.

Descriptions of the four lectures are as follows:

Thursday, April 11, 2019
“Articles One to Seven.” Historian Dan Pritchett will discuss the powers and duties of the legislative and executive branches and explore the creation of the judiciary and other important powers that are still part of our lives today.

Thursday, April 18, 2019
“The Bill of Rights.” Historic-site interpreter Dennis Fisher discusses the Bill of Rights—the first ten amendments to the U.S. Constitution—and how those rights have been expanded upon, and in some cases, restricted by the courts.

Thursday, April 25, 2019
“Amendments 11 to 17.” Delaware Technical and Community College political science instructor Ray Crew explores the changes that have been made to the Constitution over the past 232 years and the challenges that have been faced in affecting those changes.

Completed in 1791, The Old State House is one of the earliest state-house buildings in the United States, serving as the home of Delaware’s legislature until 1933 when the General Assembly moved to larger quarters in Legislative Hall. The venerable structure now appears as it would have in the late 1700s during the United States’ critical early years as a nation. It features a courtroom, governor’s and county offices and chambers for the state’s Senate and House of Representatives. The building is situated on Dover’s historic Green, a public area designated by William Penn in 1683. The Green is a partner site of the First State National Historical Park.

The Old State House is administered by the Division of Historical and Cultural Affairs, an agency of the State of Delaware. The division enhances Delaware’s quality of life by preserving the state’s unique historical heritage, fostering community stability and economic vitality and providing educational programs and assistance to the general public on Delaware history. The division’s diverse array of services includes operation of five museums which are accredited by the American Alliance of Museums, administration of the State Historic Preservation Office, conservation of the state’s archaeological and historic-objects collections, operation of a conference center and management of historic properties across the state. Primary funding for division programs and services is provided by annual appropriations from the Delaware General Assembly and grants from the National Park Service, Department of the Interior, a federal agency. However, the contents and opinions expressed in the division’s programs and services do not necessarily reflect the views and policies of the Department of the Interior.