Zwaanendael Museum to offer tours of the British warship DeBraak

-Tours explore the surviving hull section of an 18th-century shipwreck-

(DOVER, Del.—April 11, 2019)—Between June 13 and Sept. 26, 2019, the Zwaanendael Museum, located at 102 Kings Highway in Lewes, Del., will offer tours that explore the 18th-century history, artifacts and surviving hull section of His Majesty’s Sloop DeBraak, a British warship that was escorting and protecting a convoy of merchant ships en route to the United States when it was capsized and lost off the Delaware coast on May 25, 1798. 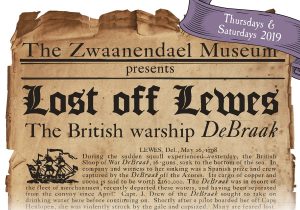 Tours begin at the Zwaanendael Museum where a lecture on the ship will be presented in conjunction with the exhibit “A Seaborne Citizenry: The DeBraak and Its Atlantic World.” Participants will learn about the history, crew and sinking of the DeBraak through a guided presentation and display of actual artifacts. Attendees will then be transported, via van, to the DeBraak conservation facility for interpretation and viewing of the ship’s surviving hull section. Each tour lasts approximately two hours.

Tickets are available at the Zwaanendael Museum. Admission is $10 per person (cash or check only). For reservations, e-mail hca_zmevents@delaware.gov or call 302-645-1148. Tours are restricted to individuals age 10 and up with space limited to 12 participants per tour. Walk-ups are welcome but space is not guaranteed. Special tours, for groups of 10 to 15, may be arranged in advance by contacting the museum.

During the late-18th and early-19th centuries, sloops of war such as DeBraak played an increasingly important role in Royal Navy campaigns. These relatively small vessels combined speed, agility, shallow draft and increased firepower, all of which made them formidable naval vessels. As the only Royal Navy sloop of war from this time period that has been recovered anywhere in the world, DeBraak serves as an invaluable historical resource for a time when Great Britain was the world’s preeminent naval power.

The surviving section of the DeBraak’s hull and its associated artifact collection have been curated by the Division of Historical and Cultural Affairs since they were acquired by the State of Delaware in 1992. Approximately one-third of the hull survives including the keel, keelson and lower framing elements, including a large section of the starboard (right) side.

About the Zwaanendael Museum …

The Zwaanendael Museum was built in 1931 to commemorate the 300th anniversary of the state’s first European colony, Swanendael, established by the Dutch along Hoorn Kill (present-day Lewes-Rehoboth Canal) in 1631. Designed by E. William Martin (architect of Legislative Hall and the Hall of Records in Dover), the museum is modeled after the town hall in Hoorn, the Netherlands, and features a stepped facade gable with carved stonework and decorated shutters. The museum’s exhibits and presentations provide a showcase for Lewes-area maritime, military and social history.

The Zwaanendael Museum is administered by the Division of Historical and Cultural Affairs, an agency of the State of Delaware. The division enhances Delaware’s quality of life by preserving the state’s unique historical heritage, fostering community stability and economic vitality and providing educational programs and assistance to the general public on Delaware history and heritage. The division’s diverse array of services includes operation of five museums which are accredited by the American Alliance of Museums, administration of the State Historic Preservation Office, conservation of the state’s archaeological and historic-objects collections, operation of a conference center and management of historic properties across the state. Primary funding for division programs and services is provided by annual appropriations from the Delaware General Assembly and grants from the National Park Service, Department of the Interior, a federal agency. However, the contents and opinions expressed in the division’s programs and services do not necessarily reflect the views and policies of the Department of the Interior.