Graduation rate up, dropout rate down for 2018

The annual Delaware Department of Education reports show an overall graduation rate of 86.69 percent in 2018, an increase from 85.75 percent in 2017. 2019 data will be available next year. The graduation rates for several student subgroups – African American, American Indian, Hispanic, low-income, English learners and students with disabilities – also are up from 2017.

“Every day educators across our state are focused on the children most at risk for dropping out or not graduating on time. They are diligently working to target interventions and supports that meet their students’ needs. Delaware’s educators deserve credit for these improvements,” Secretary of Education Susan Bunting said. “We know our work is not done, and we will continue to focus on those students who need more support. We must ensure that every child completes his or her education.”

The graduation rate tracks the percentage of 9th students who graduate with a regular high school diploma within four years.

While the annual dropout rate provides information about one particular school year and all students enrolled in high school in that year, the graduation rate provides information about a particular group of students followed over the course of high school. It looks at all students who started high school at the 9th grade and how many graduated within four years. For the 2018 data, that means students who started 9th grade in the 2014/15 school year.

The 2018 rate is the highest since the state changed how it calculates graduation rates in 2010-11.

Four-year graduation rate trend data, including subgroup and district/school information, is available in the report. 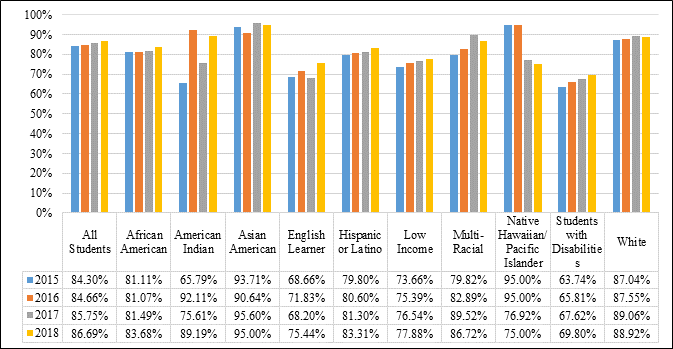 The annual dropout rate is calculated from grades 9 to 12, as prescribed by the National Center for Educational Statistics (NCES), which provides data to the federal reporting system. The rate represents the total number of students (grades 9-12) who dropped out in a single year, divided by the total enrollment of the same school year. Data also is collected from private schools and families who homeschool their children. That information is only used to verify whether students transferred from public to private and home schools.

The majority of the 699 dropouts were male (432). The largest number were enrolled in the 10th grade (215). Students cited academic, personal and economic reasons for why they left school.

The state report provides analysis based on demographics and geographic breakdowns, including by county and districts/charter schools. For 2017-18, New Castle had the lowest percentage of dropouts (1.5 percent). Kent County’s rate was 1.6 percent while Sussex’s rate was 2.2 percent. Find more details in the report.

The reports will be presented to the State Board of Education on Thursday. Find the presentation slides here. Find more historical data here.