Reminder for the week: Hunters must be aware of restrictions and regulations
when importing harvested deer carcasses or parts from other states into Delaware 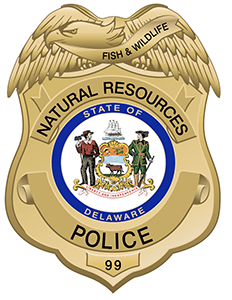 Boating & Boating Safety: Failure to report a motor vessel accident (1), failure to operate a reasonable speed to avoid a motor vessel collision (1), and operating a vessel with insufficient number of life jackets (1)*.

Other: Possession of a weapon with an altered serial number (1), conspiracy 3rd degree (2), operating an unregistered motor vehicle (1), driving with a suspended or revoked license (1), escaping load from motor vehicle (1), dumping (2), wildlife area map violation – parking outside of designated zone (2), trespassing after hours on a state wildlife area (13)*, and trespass closed area on Division lands (1)*.

DNREC’s Division of Fish & Wildlife recognizes and thanks the majority of anglers, hunters, and boaters who comply with and support Delaware’s fishing, hunting, and boating laws and regulations. The Public are encouraged to report fish, wildlife, and boating violations to the Delaware Fish & Wildlife Natural Resources Police by calling 302-739-4580 or through the DENRP Tip app on a smartphone, which can be downloaded free of charge by searching “DENRP Tip” via the Google Play Store or the iTunes App Store. Wildlife violations may also be reported anonymously to Operation Game Theft by calling 800-292-3030, going online to http://de.gov/ogt, or using the DENRP Tip app. Verizon customers can connect to Operation Game Theft directly by dialing #OGT.

Are you AWARE?
It is unlawful to import or possess any carcass or parts of a carcass of any member of the family Cervidae (deer, elk, or moose) originating from areas of another state or Canadian province where Chronic Wasting Disease (CWD) has been found in free-ranging or captive deer or other Cervidae species.

However, the following deer, elk, and moose parts may be imported into the state:

Regionally, the states of Maryland, Pennsylvania, Virginia, and West Virginia have confirmed the presence of CWD. From these states, hunters are restricted from bringing entire deer carcasses into Delaware and may only bring the above mentioned parts from the counties in which CWD has been found. If hunters are hunting in portions of these states outside of those areas, they are not restricted from bringing a harvested carcass back to Delaware.

CWD is documented in the following counties in neighboring states, and are subject to the import restrictions:

CWD has been detected in 26 states and three Canadian provinces. For a complete list of restricted areas within other states, please visit http://cwd-info.org/ or contact the Division of Fish & Wildlife at 302-735-3600.