(DOVER, Del. — June 15, 2022) — The American Association for State and Local History announced today that it has presented a prestigious Award of Excellence to the John Dickinson Plantation, Delaware Division of Historical and Cultural Affairs, for the project, “Search, Discovery, and Interpretation of the African Burial Ground at the John Dickinson Plantation.” The Award of Excellence is part of the Association’s Leadership in History Awards, the most prestigious recognition for achievement in the preservation of state and local history. 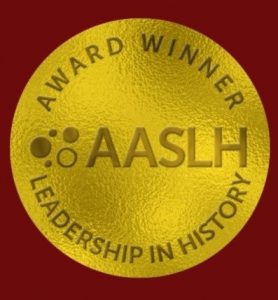 As part of the project, a concerted effort to find the burial ground at the John Dickinson Plantation began in the late summer of 2020. In March 2021, after utilizing research from surviving documents, aerial photography and archaeology, the African Burial Ground was discovered. Project development began with decisions on how to interpret this culturally sensitive and historically significant site. The goals for interpretation included delineating the historical context of enslaved peoples’ lives, recognizing African Americans in the cultural landscape and locating those with ties to the burial ground. Initial programs included public visitations to the African Burial Ground, a virtual visitation for school children, and culminated in an online panel discussion on Dec. 8, 2021 with Gov. John Carney, which can be seen here: https://youtu.be/P1JliA3uwL4.

The American Association for State and Local History’s awards program was initiated in 1945 to establish and encourage standards of excellence in the collection, preservation and interpretation of state and local history throughout the United States. The Leadership in History Awards not only honor significant achievement in the field of state and local history, but also bring public recognition of the opportunities for small and large organizations, institutions and programs to make contributions in this arena.

The John Dickinson Plantation is located at 340 Kitts Hummock Road in Dover, Delaware. Dickinson, known as the “Penman of the Revolution,” was one of America’s founding fathers who wrote of freedom and liberty for all while holding human beings in bondage. The John Dickinson Plantation tells the stories of the Dickinson family; and the tenant farmers; indentured servants; and the free and enslaved Black men, women and children who lived, worked and died on the plantation.

The John Dickinson Plantation is administered by the Division of Historical and Cultural Affairs, an agency of the State of Delaware. The division enhances Delaware’s quality of life by preserving the state’s unique historical heritage, fostering community stability and economic vitality and providing educational programs and assistance to the general public on Delaware history. The division’s diverse array of services includes operation of five museums which are accredited by the American Alliance of Museums, administration of the State Historic Preservation Office, conservation of the state’s archaeological and historic-objects collections, operation of a conference center and management of historic properties across the state. Primary funding for division programs and services is provided by annual appropriations from the Delaware General Assembly and grants from the National Park Service, Department of the Interior, a federal agency. However, the contents and opinions expressed in the division’s programs and services do not necessarily reflect the views and policies of the Department of the Interior.