DOVER (Aug. 7, 2012) – For the second time this summer, the Delaware Forest Service is sending a crew of 20 volunteers to battle a wildfire in the western United States. The team is currently assigned to the Cave Canyon Fire, an 8,800-acre blaze located 15 miles southeast of Twin Falls, Idaho. Delaware’s team mobilized at Blackbird State Forest last evening in preparation for their departure from Harrisburg, PA today.

According to the National Interagency Fire Center, even though the National Fire Preparedness Level remains at 3 on a 5-point scale (http://www.nifc.gov), there are currently 44 large uncontained fires nationwide, which often prompts a need for manpower and resources from other areas of the country such as the 20-state Eastern Area Coordination Center (EACC) to which Delaware belongs. In almost every year since 1998, the First State has fielded a team of trained firefighters to assist in wildfire containment, achieving a sterling reputation among national wildfire agencies thanks to its hardworking and knowledgeable personnel. As a sign of the depth of its training program, the Delaware Forest Service once dispatched 40 firefighters on a single assignment during a very busy fire season in 2007, a first for the agency. Most recently, Delaware sent a 20-man team on June 24 to the Weber Fire in southwestern Colorado that was eventually reassigned to the Arapaho Fire in the mountainous terrain near Wheatland, Wyoming – a blaze that burned more than 88,000 acres.

Delaware’s crew is a mixture of public agency employees, volunteer firefighters and private citizens with a keen interest in fighting wildfires. While many of the current crew members are veterans of multiple assignments – including 67-year-old John Cirafici of Milford – the team also includes first-timer Patrick Gilchrist of Townsend, DE.

All crew members must hold current “red-card” certification from the National Wildfire Coordinating Group (NWCG), which involves completion of a set of core training courses, attendance at the DFS’ annual “Fire Camp” live-burn training session as well as a strenuous work capacity test in which participants must carry a 45-pound pack over a three-mile course in less than 45 minutes.

The current 20-man crew includes seven staff members from the Delaware Forest Service. In addition, Ashley Peebles of Harrington, the Delaware Forest Service’s Trainer-Educator who oversees the annual Smokey Bear fire prevention education program for schoolchildren, is also departing today to join the national firefighting effort on a two-week assignment as a field dispatcher in Idaho.

Photo 2:  Veteran firefighter Scott Veasey of Millsboro gets ready to load his gear for the trip out west to battle a wildfire near Twin Falls, Idaho as part of team of 20 firefighters trained by the Delaware Forest Service.

Photo 4: As they gather at Blackbird State Forest near Smyrna, the fire crew is briefed on their upcoming assignment to battle a blaze in Idaho.

Photo 5: Howard ‘Duke’ Harrison of Wilmington preps his gear for his 14-day assignment as part of the Delaware wildland fire crew.

Photo 6: (from left) Nathaniel Sommers of Smyrna listens to crew boss Glenn Gladders of Dover as Sam Topper of Federalsburg, MD looks on. 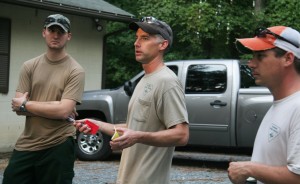 Photo 7: Nathaniel Sommers of Smyrna loads his gear on to the bus before the crew’s departure from Blackbird State Forest.

Video footage will be forthcoming on YouTube Channel: DelawareForests

The Delaware Forest Service is now accepting applications for its annual Urban & Community Forestry Grant Program, which has awarded over $1 million to more than 200 Delaware communities and organizations since the program’s inception in 1991.  Municipalities and homeowner groups can apply for up to $5000 in matched funding for projects that increase tree canopy, develop and implement tree management plans, remove hazardous trees or use trees to mitigate storm water runoff. Each applicant must match its grant on a 50-50 cost-share basis with either nonfederal funds or in-kind services (volunteer time, staff time, etc.).

Complete details are available at http://delawaretrees.com

The application deadline is August 1, 2012. No email or fax submissions will be accepted.

Photo: A tree planting project in Middlesex Beach was completed in partnership with the Delaware Forest Service’s annual Urban and Community Forestry Grant program. Applications for this year’s funds are now being accepted through August 1, 2012. Details at http://delawaretrees.com 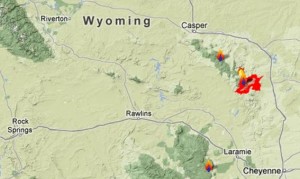 Twenty wildland firefighters from Delaware who battled fires in Colorado for the past week are now assigned to the massive Arapaho Fire located 28 miles northwest of Wheatland, Wyoming.

The large blaze is considered “dangerous” by fire officials on the scene and is currently estimated at almost 88,000 acres in size with only 10 perecent containment. Officials say the fire has the potential for rapid growth due to the hot and dry weather conditions in the region. Delaware’s crew is conducting burnout operations in Division Y of the massive blaze.

The Arapaho Fire is currently 87,984 acres as of an infrared flight Monday night. Some structures have been destroyed but the area is still too dangerous to allow a detailed assessment. Structure protection groups remain in place 24 hours a day. Aviation resources continue to assist on the fire as the weather and winds allow. 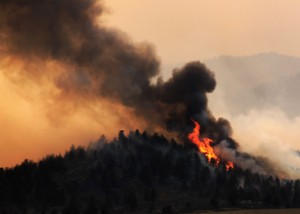 There will be a public meeting on July 3rd at 6:30pm at the Douglas Middle School in Douglas.

Remarks – Transfer of command to Mike Morcom’s Type 1 PNW2 team took place on 7/1/2012 at 2000. Incident costs(Block 19) and Committed Resources(Block 43) have not been updated from yesterday. Structures lost(Block 24) is an estimate at this time.

Delaware’s crew of 20 wildland firefighters is now assigned to the Pine Ridge Fire, located 13 miles northeast of Grand Junction, Colorado along the Colorado River. The fire began on June 27 and is currently estimated at 13,360 acres with 35 percent containment. 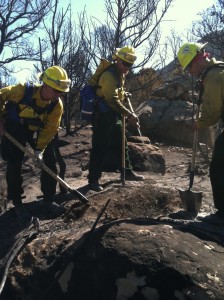 Current Situation: Crews were successful in meeting yesterday’s priority objectives, which included keeping fire from crossing the Colorado River and south of Shale Ridge. Containment lines are looking good with hard work from fire crews and aviation support. Personnel on the west side of the fire are building line in a northerly direction to connect with the existing fireline on the north flank.

Containment was reached on the east side of the fire along the Colorado River and I-70 corridor including the northeast corner. The Union Pacific Railroad assisted with equipment and water transportation yesterday which allowed crews to work on line construction more quickly.

Helicopters cooled hot spots in steep inaccessable areas and held fire along the perimeter so crews could construct direct fireline.

Today crews and engines will patrol the east, north and west flanks of the fire and continue mop-up operations. On the south side of the fire, crews will go direct and work to connect the fireline with the east and west flanks. Shifting winds are expected today which can make fire behavior unpredictible.