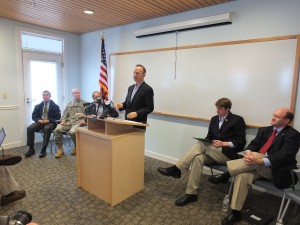 OTH BEACH, Del. –  Governor Jack Markell, Delaware’s Congressional Delegation of U.S. Sens. Carper and Coons and Representative John Carney (all D-Del.) and Delaware Department of Natural Resources and Environmental Control Secretary Collin O’Mara announced that as much as $30 million in federal funding has been secured to rebuild Delaware beaches to protect homes, businesses and roads against future storm damage. Major storms like Superstorm Sandy proved the importance and resiliency of a strong beach and dune system in protecting lives, property and infrastructure along the Delaware coastline.

“Because we are a low-lying state, extreme storms pose a real threat to us,” said Governor Markell. “Citizens, businesses and infrastructure are affected when an area floods.  My thanks goes to our Congressional delegation for securing the funding that’s allowing us to restore damaged beaches and dunes and shore up our vulnerable areas so we can mitigate the potential impact of future storms.”

The Army Corps of Engineers (ACOE) received funding through the Disaster Relief Appropriations Act of 2013 to restore Delaware beaches to pre-Superstorm Sandy conditions. Almost two million cubic yards of sand will be pumped back onto Delaware beaches. The ACOE also received the necessary funding through Flood Control & Coastal Emergencies (FCCE) to restore Delaware beaches to their design templates, which means the beach just north of the Indian River Inlet will be restored with a full beach and dune that can be maintained by the sand bypass system.

“Yesterday was the six-month anniversary of Superstorm Sandy and while Delaware did not have the severe damage that our neighbors to the north experienced, Delaware did see widespread flooding that caused damage to many of our homes and businesses,” Senator Carper said. “Roads and bridges were damaged or washed out, hurting commerce and transportation and cutting off access to hospitals, schools and work. I am so pleased that we are not only going to repair our beaches, but that the Corps is going to construct a truly protective beach and dune. It’s a smart investment to reduce potential losses and protect lives, homes, businesses and infrastructure.”

“As Delawareans, beaches are at the heart of our communities,” Senator Coons said. “Storms and rising sea levels can cause severe erosion, and we have to remain vigilant in order to ensure we have the best possible protections in place. As we saw when Superstorm Sandy hit in October, sound management and flood protection measures on our beaches prevented devastating damage, and now we have to be ready before the next storm hits. Today marks an important step in our storm recovery, and reiterates our commitment to maintaining vibrant, healthy beach communities along our coastline.”

“As we mark six months since Superstorm Sandy, we are reminded that even though Delaware was spared the widespread damage that occurred in neighboring states, it is important to keep investments in place that will protect our homes, businesses, and infrastructure from serious damage in the future,” said Congressman Carney.  “This funding also supports beach tourism, which contributes greatly to Delaware’s economy and supports thousands of jobs.  With Memorial Day fast 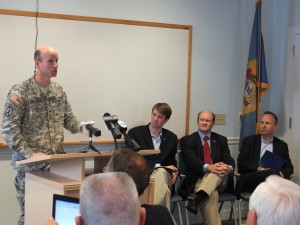 While repairing and strengthening our beaches is vital to maintaining and growing Delaware’s $6.9 billion a year coastal economy, Delaware’s Congressional Delegation and Governor Markell have been working to ensure that federal dollars are used to mitigate damage from future storms.

Governor Markell to Meet with IT Business Leaders in Mumbai

Wilmington – Governor Jack Markell announced today that he will lead a trade mission to India from Wednesday, February 6, through Saturday, February 16, 2013 .  Invited by the National Association of Software and Services Companies (NASSCOM), India’s premier IT industry association, to speak at its annual Leadership Forum in Mumbai on February 13th, Governor Markell will address over 1500 participants from nearly 25 countries, followed by one-on-one meetings with several CEOs and company chairpersons.  The Forum, which will focus on the theme of partnerships and global growth, is among the most prestigious international IT conferences for the growing IT sector in India.

“Indian companies continue to expand their operations in the United States, and we want them to know Delaware has an outstanding IT workforce.  We are leading the country in developing cyber security personnel and have much to offer a prospective company,” said Governor Markell.  “We want international business managers looking to locate or expand their businesses to consider locating in Delaware.”

The Governor will be promoting Delaware’s high-caliber workforce, convenient location, and reasonable cost of living as he meets with several business leaders and their company representatives at the conference.

According to a report published by NASSCOM in 2012, Indian IT companies directly employ 107,000 people in the U.S., up from 58,000 in 2006.  These jobs indirectly support many others through local suppliers, re-spending and tax payments.  Several Indian companies have announced plans to expand employment for U.S. workers over the next few years.

Similar to his previous trips, the Governor will utilize social media to stay in communication with Delawareans. He will participate in a Google+ hangout with students from Delcastle Technical High School, who are working on a project to learn about international social media and trade with India.  The class will communicate with people in Delaware and India over the next several weeks to encourage engagement via Twitter and Facebook. During the Google+ Hangout, they will brief the Governor on their research results.

“Delaware has a world-class IT workforce and an exceptionally strong social media community,” said Governor Markell.  “Social media is a way for our students and our broader community to raise Delaware’s profile in India.  I applaud their efforts to help us communicate beyond our borders.”

Governor Markell will be accompanied by Secretary of Transportation Shailen Bhatt and Felicia Pullam, Deputy Director for International Trade.  Secretary Bhatt previously traveled to India in 2010 representing the Federal Highway Administration to meet with government and business officials interested in furthering cooperation on transportation issues.  Also, University of Delaware President Dr. Patrick Harker will join the trade mission in Mumbai.   The University of Delaware enjoys a strong reputation in India for its chemical engineering department.

Wilmington – With the strong possibility Hurricane Sandy will significantly affect Delaware, Governor Markell is urging residents and visitors to prepare for the storm.  A combination of rain, wind and tides indicate the Hurricane Sandy could impact the entire state.

“Evacuation is something I don’t take lightly, given the effect it can have on people’s lives and on people’s business.  A mandatory evacuation of the coastal areas is something that is likely if the storm stays on its current path.  We have not declared a state of emergency but will when it become necessary to declare one,” said Governor Markell.   “Many agencies are planning for our state’s readiness. In the meantime, I am encouraging residents to prepare for their families’ safety.  That means making plans to remain at home for long periods of time, possibly without power or evacuate quickly, if needed.   In other words, be prepared to stay and be prepared to leave.”

“I ask people around Delaware to spend Saturday making sure storm drains are clear and to try to get any leaves up that might get washed into storm drains.  The difference between some neighborhoods flooding or not is going to be whether or not storm drains are clogged by leaves on the ground or leaves that will come down during this storm,” said the Governor.

The Governor talked to reporters by phone late this afternoon from his Wilmington Office, advising residents to fill prescriptions, gather emergency items and get households in order.

The Governor said residents should have an evacuation destination in mind, especially if they live in a flood-prone or coastal area.   The State, Red Cross, local schools and the counties and City of Wilmington will be working together to identify possible shelter locations and activate them when it becomes necessary.

The Delaware Emergency Management Agency (DEMA) and relevant partners statewide are in communication with the National Weather Service and will continue to regularly monitor conditions.

DelDOT is preparing for a possible major storm

Across Delaware, crews are working to minimize any possible traffic hazards if the storm strikes the area.

Dover — The men and women of the Delaware Department of Transportation (DelDOT) are spending today doing all they can to prepare for the possibility of a major storm striking Delaware, and many will be working over the weekend to ensure the state’s transportation system is as secure as possible.

Below are bullet points detailing their efforts:

Indian River Inlet Bridge and Route 1 at the beach

Closures after the storm

List of overhead signs being removed in Sussex County:

The people and equipment of DelDOT are getting ready

Dover – As Hurricane Sandy moves along the East Coast of the United States, senior officials from the Delaware Department of Transportation (DelDOT) are monitoring the reports from the National Weather Service, and the Delaware Emergency Management Agency. They have instructed DelDOT crews to begin preparations in case the storm impacts our state.

Across Delaware, crews are making sure equipment is available and ready for service, and most importantly, making sure that personnel are ready for the possibility of working for an extended period.

DelDOT urges people who live in areas prone to flooding to take precautions too. Thought should be given to possible evacuation, and assembling necessary supplies. Staying off the roads during the storm will help DelDOT crews do their jobs.

“At DelDOT, we always plan for the worst, and hope for the best,” said DelDOT Secretary Shailen Bhatt. “Today, we’re asking residents to please start making plans as well.”