DOVER, Del.  – Following a review by the Workers’ Compensation Task Force, created with the support of Governor Jack Markell and led by Lieutenant Governor Matt Denn, the Governor signed House Bill 175 to implement 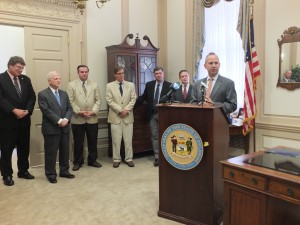 The Task Force was established to address the dramatic increase in Delaware’s workers compensation premiums over the past two years, after four consecutive years of decreases that totaled over 40%.

“This bill represents another important step toward ensuring we make our state an attractive location for companies,” said  Governor Markell. “Rising premiums weren’t only unfair, but they also take away from other investments businesses can make in expanding and hiring Delawareans. I applaud Lt. Governor Denn’s leadership in ensuring the task force acted swiftly and effectively.”

“The legislation makes important changes to control medical costs, ensure greater scrutiny of insurance company rate increase requests, and help get injured workers back to work more quickly,” said Lt. Governor Denn, Chair of Delaware’s Workers’ Compensation Task Force. “But our work is not done, and we will continue to look at other areas where we can control costs without impacting the quality of medical care received by injured workers.”

Lawmakers who joined the Task Force and shepherded the bill to passage emphasized cooperation as a key to the group’s success:

“It was a pleasure to take part in an effort in which people from diverse backgrounds came together to accomplish a great deal toward reaching a common goal,” said Rep. Bryon Short, D-Brandywine Hundred, lead House sponsor of the bill. “I look forward to continuing to work with the group to tackle what’s left to ensure we keep rates low and protect our workers.” 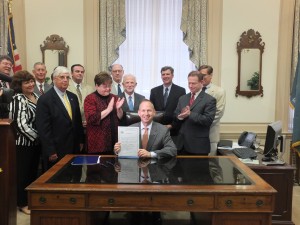 “We got this bill through both houses so quickly because of the task force’s ability to reach a consensus among all of the groups represented,” said Senate President Pro Tem Patricia Blevins, D-Elsmere. “We think we have taken significant steps to stabilize workers compensation.”

“This was the collective work of the elected, legal and business community,” said Secretary of Labor, John McMahon.  “As a former Insurance Commissioner, Lt. Governor Denn was uniquely qualified to help us navigate a set of diverse and complicated issues and develop a responsible plan of action.”

2. Ensure that insurance carriers’ requests for rate increases receive a high level of scrutiny. These recommendations include the retention of a part-time attorney to represent businesses during the workers compensation rate-setting process, and a system to ensure that insurers are diligently enforcing the state’s medical cost controls.

4. Improve the state’s workplace safety program to both increase its usage and ensure that is accurately determines which workplaces are using appropriate safety practices.

Additionally, the General Assembly accepted the task force’s suggestion that they be kept in existence on a temporary basis, both so that it can consider some issues that it did not have time to discuss during the short time that it had to make recommendations, and so that it can monitor the impact of its recommendations and suggest stricter measures with respect to medical costs if necessary. If the implemented recommendations do not result in manageable increases in workers compensation premiums, the task force believes that more significant changes should be considered both with respect to the levels and methods of paying medical claims, and the system for calculating injured workers permanency and lost wage claims.

Wilmington, Del. May 7, 2013 – Delaware businesses will find topical information about issues affecting their bottom line at the Delaware Department of Labor 10th Employer Conference, May 16, 2013 at Chase Center on the Riverfront. This includes a look at “Delaware’s economy: where we’ve been, where we are and where we’re going,” information about an improved process for accessing quality workers through Delaware-Job-Link, and current information on the Affordable Care Act, workers compensation, anti-discrimination and labor law.

The conference, on hiatus for about five years, will update businesses about labor law, workers compensation, anti-discrimination, the Affordable Care Act, and other issues affecting the business bottom line.

DOL decided to hold the conference because of several new initiatives. Among these is the newly designed resume builder at Delaware JobLink (www.joblink.delaware.gov), the state’s web-based job search and information portal. This will make it easier and faster for employers and skilled workers to find each other.

“As our economy becomes more global, more productive and more competitive, we want our employers and our workforce to be ready for the opportunities and the challenges ahead,” said Governor Jack Markell. “This is about informing and supporting employers in ways that help them strengthen, grow and hire for the future.”

“This conference provides employers an opportunity to discover the many tools and program resources available to support their employment needs,” said Delaware Department of Labor Secretary John J. McMahon Jr. “It’s important to remember the Department of Labor is much more than the unemployment office and has wide ranging services. We look forward to answering questions and introducing business leaders to our very talented and dedicated staff.”