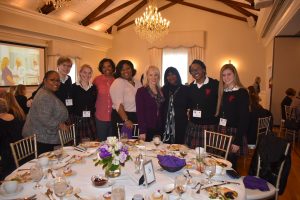 Wilmington, DE – Lt. Governor Bethany Hall-Long, PhD., was celebrated by the University and Whist Club of Wilmington today with a luncheon as their honoree for International Women’s Day.  Events around the world today serve to highlight the social, economic, cultural and political achievements of women across the globe. Today’s event marks the second year the Whist has recognized a Delaware woman for her contributions and achievements on behalf of women in Delaware and across the globe.

“International Women’s Day sends a strong message that we have to press on and keep working toward equality and parity for women,” said Hall-Long, who is a nursing professor at the University of Delaware and served over 14 years in the General Assembly. “We’ve made great strides in closing the gap, tearing down walls and barriers, and making sure that women and girls have all the opportunities we can afford them. I hope that International Women’s Day serves as an inspiration to young girls to pursue their dreams. I am honored that my work making Delaware a healthier and stronger state was recognized today.”

“Today was such a wonderful event. This is our second year celebrating International Women’s Day here at the Whist, and we couldn’t have been more pleased than to celebrate the Lt. Governor’s accomplishments as a way to recognize this day,” said Stacey Inglis with the University & Whist Club.

A packed room of nearly 180 individuals listened as a series of speakers honored Lt. Governor Hall-Long with presentations and spoke about her experience and work in the areas of health policy, government, and advocacy for the community on issues from addiction and expanding healthcare and treatment.

In a prepared letter read by James Collins, Delaware’s Chief Information Officer, Governor Carney lauded the Lt. Governor, noting that “Bethany has proven her commitment to help our most vulnerable. As Lieutenant Governor, and as Chair of the Behavioral Health Consortium, she’s doing important work to confront the addiction crisis and improve mental health services for Delawareans”.

International Women’s Day has been celebrated for more than one hundred years. Dr. Anne M. Farley touched on the importance and history of this day and referenced how the Lt. Governor is an example of this year’s theme, #PressforProgress. “Whether she is collaborating on a grant, conducting research, presiding over the State Senate, giving a lecture at the University of Delaware, working in a community, or interacting one on one with an individual, Bethany reflects these humanistic values that honor the dignity of a person…and just does not sleep enough balancing it all.”

Proposal offers 12 weeks of paid parental leave, would make Delaware the 6th state to offer the benefit to public workers

DOVER, Del. – Governor John Carney joined members of the General Assembly on Tuesday to call for passage of legislation that would offer 12 weeks of paid parental leave to state workers. The bill, House Bill 3, would allow state workers to care for their families without losing wages, and would make Delaware just the 6th state to offer the benefit to public workers.

Governor Carney hosted Tuesday’s announcement in his Legislative Hall office as lawmakers returned to Dover for the second half of the 149th General Assembly.

“Delaware can and should lead on this issue,” said Governor Carney. “This legislation is about supporting our state workers – and creating a workplace that values family. Workers deserve time to spend with their families when their children are born, and this benefit will help us attract and keep good employees. Thank you to the state workers, members of the General Assembly, and advocates who are leading on this issue. I urge lawmakers to offer their full support for this legislation.”

“As a nurse and a mother, I can tell you, those first days and weeks at home with a new baby or child are the most crucial for both the parent and the child,” said Lieutenant Governor Bethany Hall-Long. “It can also be a stressful time, and the worry of getting the time off, as well as a paycheck, shouldn’t be a barrier to establishing a strong and healthy family bond. It is essential, and everyone should be able to enjoy these types of benefits.”

“The State of Delaware has an opportunity to lead on leave, and I am so encouraged by the support of my colleagues and Gov. Carney. Our dedicated state workers deserve to have the time to experience the all-important and educational “firsts” with a new child, without the anxiety of leaving their child too soon,” said Representative Debra Heffernan, the prime sponsor of House Bill 3. “Having a child is completely life-changing, and we should be supporting our state workers as they navigate that experience.”

“Many of our state workers rely on two incomes to cover household expenses so taking unpaid leave is not an option. The availability of paid parental leave will be transformative to those working families, so they don’t have to choose between their career or their home life,” said House Majority Leader Valerie Longhurst, co-sponsor of House Bill 3. “I am so proud to see Gov. Carney back this policy. Delaware has the chance to be one of the leading states on this issue and we need to continue to champion the discussion around it.”

“Anyone who’s been a working parent understands how hard it is to leave a newborn at home so that you can pay your bills,” said Senate Majority Leader Margaret Rose Henry. “Paid parental leave is a step forward and for thousands of moms and dads across Delaware, but it’s also key to our kids’ futures and to the strength of our communities. This is common-sense health and economic policy that I’m proud to support, and I’m glad that Gov. Carney is stepping up for moms and dads across our state.”

The United States is one of only nine countries in the world – and the only industrialized nation – that does not offer paid maternity leave, and one of only a handful of high-wealth nations that does not offer paid paternity or parental leave. House Bill 3 would make Delaware a leader on the issue. Under the legislation, full-time state employees, including teachers, would be eligible for 12 weeks of paid maternity or paternity leave after one year of employment. Parents would be eligible for leave for up to one year after the birth of a child, or the adoption of a child under the age of six.

More and more, families rely on two incomes to cover household expenses, and lose billions in wage by taking unpaid leave to care for their families. Nationally, nearly one-quarter of moms are back at work within two weeks of giving birth.

“We are thankful to Governor Carney for supporting House Bill 3 and paid parental leave for state workers,” said Mike Matthews, President of the Delaware State Education Association. “When starting or adding to their families, our educators and state workers need to be able to spend the time needed at home with their newborns or newly adopted children.  They shouldn’t have to choose between bonding with their new arrival and putting food on the table or paying their bills.”

“This legislation will help state workers remain together with their families during an important time in their lives, without having to worry about how they’re going to pay the bills,” said Michael Begatto, Executive Director of Council 81 of the American Federation of State, County and Municipal Employees. “We are very pleased that Governor Carney and legislators are considering the needs of state workers and their families, and thank them for moving forward with this legislation.”

“The bond between a parent and either their newborn or adopted child is the most fundamental element contributing to the healthy family unit as we envision it,” said Dr. Richard Henderson, President of the Medical Society of Delaware. “The 12 weeks of paid parental leave after giving birth or the adoption of an infant or child up to 6 years of age proposed in this bill removes the economic penalties and pressures associated with this life-altering choice. Equally as important is that it provides for the opportunity for this critical bonding to occur. The physicians of Delaware are glad to see the Governor’s support for this important legislation.”

“This bill would set a new standard for how states should and can invest in their workforce when it comes to paid parental leave,” said Melanie Ross Levin, Director of the Office of Women’s Advancement & Advocacy at the Delaware Department of Human Resources. “We are thrilled that Governor Carney and legislators are prioritizing a bill that recognizes the importance that both mothers and fathers play in child development.”

Selected as one of twenty state officials from across the nation, Lt. Governor Hall-Long will participate in a nine month national fellowship on state-level education policy.

Washington, D.C. – Lt. Governor Bethany Hall-Long will join a group of twenty state officials from across the country who have been selected to participate in the Hunt-Kean Leadership Fellows Program on education policy. The fellowship, named after former North Carolina Governor Jim Hunt and former New Jersey Governor Tom Kean, is a bipartisan group assembled to discuss the importance of educational standards, aligned assessments, and accountability systems. Over a nine month period, fellows will be immersed in a variety of state-level education policy initiatives and ideas to share with their respective states.

“As an educator and Lt. Governor, I have made it a priority to focus on the growth and success of all Delaware students.” Said Lt. Governor Bethany Hall-Long. “My journey in education has greatly impacted my desire to promote and work for all who seek to succeed through education. I am very excited to be part of the Hunt-Kean Leadership Fellows program and actively work with the Hunt Institute to explore more resources, strategic ideas and cultivate my passion for education.”

The fellowship, which kicks-off December 6-8 in Washington, D.C. will include panel discussions with former U.S. Secretary of Education Arne Duncan, Fordham Institute President Mike Petrilli, and National Alliance for Public Charter Schools President Nina Rees, as well as a tour of the Capital City Public Charter School in Washington D.C. Before the second convening in August 2018, fellows will have the opportunity to participate in regional visits to innovative programs and state-specific briefings in their home states.

“Nonprofit organizations provide many services that benefit Delawareans across the state every day. I’m proud to recognize Giving Tuesday in the First State, and to support a movement about giving back. I encourage all Delawareans to give back to your community by volunteering, making a donation, or participating in a community service project

throughout the holiday season.”

Click here to view photos from the proclamation signing.

“All of Delaware’s students deserve a quality education, and an equal opportunity to succeed. American Education Week recognizes our educators, parents, staff, and community members for the vital role they all play in supporting our public schools, and their work to ensure student success. Delaware is lucky to have such great teachers, education support professions and substitute teachers, and we thank them for their commitment to our students.” 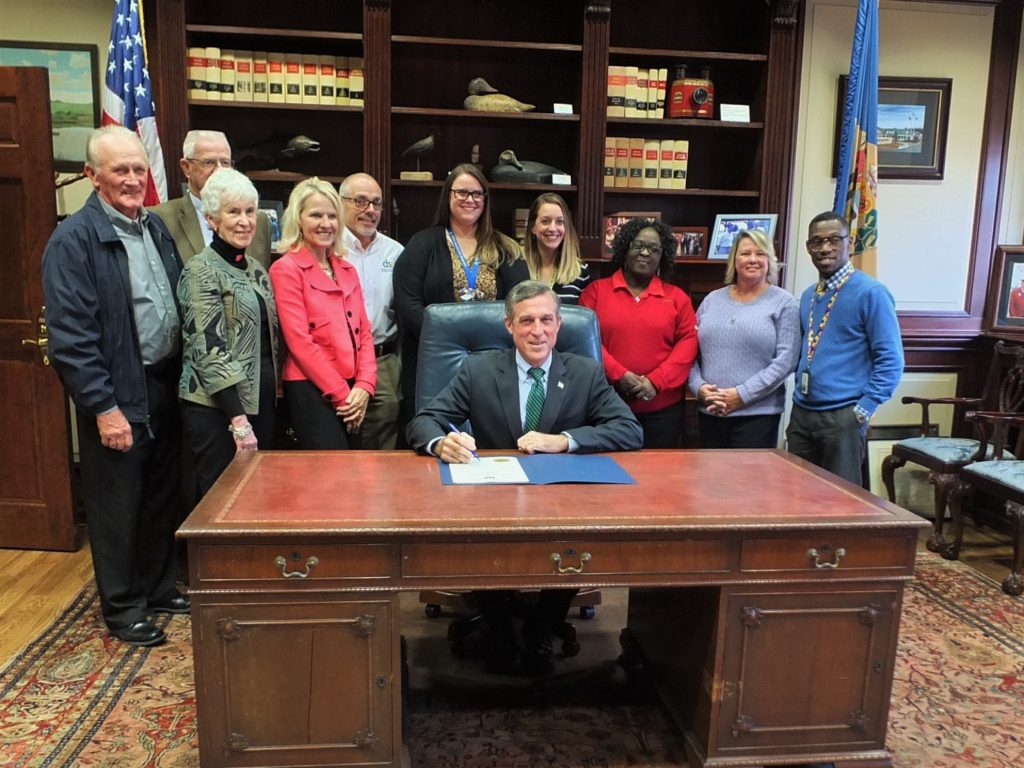