On Saturday morning, he will join fellow Democrats at the annual Democrat/ Republican volleyball match benefiting Easter Seals. The CAI/Easter Seals Volleyball Challenge is a 3 day event that helps raise urgently needed dollars to provide services for children and adults with disabilities, now in its 32nd year.

On Sunday, the Lt. Governor will join Preston’s March, a nonprofit agency that provides specially-adapted bikes for youth and children with special needs, to present a very special bike to a boy with special abilities. Roman is the son of Pastor Jim Weaver of Crossroads Presbyterian Church and has Tar Syndrome, a rare genetic disorder that is characterized by the absence of the radius bone in the forearm.  This bike was made especially for him and will give him the chance to enjoy ride a bike with his friends.  **It is a surprise for Roman!** You can learn more at www.prestonsmarch.org

Lt. Gov. Denn then serves as master of ceremonies and auctioneer at the Red Balloon Brunch. This event benefits the Cancer Support Community, a state-wide organization that works with those diagnosed with cancer and their families to offer support in dealing with such a diagnosis through counseling, education, exercise, nutrition or a variety of other services, which are all offered free of charge.

Finally, the Lt. Governor will join thousands at UDance. Hosted at UD, is a 12-hour philanthropic dance marathon that unifies the campus community and raises awareness about pediatric cancer. It’s the university’s largest student-run philanthropy and has donated over $900,000 in 6 years of existence. This past year alone UDance doubled 5 years of effort by raising over $450,000. These donations have benefited The Andrew McDonough B+ Foundation, which supports medical research for families of critically ill children across the country.   The 2013 goal is $600,000 and it is expected that more than 5,000 people will participate.

Legislation sponsored by Rep. Longhurst, Sen. McDowell and others would require criminal history checks in connection with virtually all gun sales

“I am proud to endorse this initiative to expand background checks for firearm purchases,” said former Congressman and Governor Castle.  In 2009, I sponsored the Bipartisan Gun Show Loophole Closing Act in Congress because of my firm belief that only people who are not prohibited under law from having a gun should be allowed to buy one.  This is a common-sense measure that can save lives.” 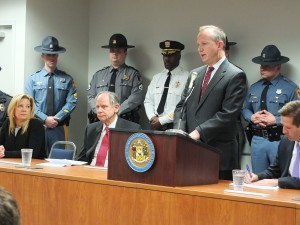 “Under existing law, when a licensed dealer sells a firearm, he or she must perform a background check on the potential buyer. But when the sale does not involve a licensed dealer, no background check is required,” said Governor Markell.  “We know that people who are prohibited by law from possessing firearms still try to acquire them.  This bill is an important tool to keep guns away from convicted felons and other persons who have no business having a gun in their hands.”

“The evidence is clear that background checks keeps guns away from people not allowed to possess them under the law—especially criminals,” said Attorney General Biden, who helped to implement the Brady background check law when he worked at the U.S. Department of Justice in the late 1990s. “Requiring universal background checks is a common-sense approach to protect public safety by keeping weapons away from even more people who should not have them.”

In 2011, House Majority Leader Rep. Valerie Longhurst sponsored legislation to sync Delaware’s background check system with the federal database for firearm purchases. Rep. Longhurst said two years ago she listened to the testimony of parents of two victims in the 2007 Virginia Tech shootings and in light of recent events, Delaware needs to reevaluate its background checks system.

“Keeping firearms out of the hands of criminals is critical to cutting down on gun violence and protecting our citizens. One way to do that is through background checks for gun purchases, but there is a significant loophole in our current system that we need to address,” said Rep. Longhurst, D-Bear. “In just the last six years, close to 3,500 people were denied firearms because they failed a background check at a gun store. Unless we establish universal background checks, those same people can just go to a gun show or another private gun seller to buy a firearm. Why shouldn’t the same criteria apply to all of these gun sales? This bill would close that loophole and keep guns out of the hands of people who should never have the chance to purchase them.” 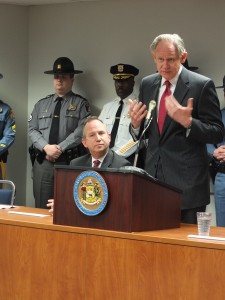 “Loopholes are ways people circumvent the law,” said Senator Harris McDowell, III, D-Wilmington North.  “This closes a giant loophole through which guns are pouring into the hands of criminals and others prohibited from possessing firearms.”

The legislation unveiled today would require that a background check be performed in connection with the sale or transfer of any firearm, regardless of whether the transaction involves a licensed dealer.  The bill includes a few narrow exceptions, including sales or transfers of firearms involving:

The bill is one of five gun safety measures being proposed by Gov. Markell, Lt. Gov. Denn and Attorney General Biden in the wake of the Newtown, CT massacre and other recent mass shootings.  The prime sponsors of the bill are Sen. Margaret Rose Henry (D-Wilmington East) and Rep. Michael Barbieri (D-Newark).

“Far too often, guns that are stolen or lost wind up being used to commit crimes,” said Governor Markell.  “If we’re serious about keeping guns out of the wrong hands, we need to do a better job of accounting for these weapons.  Reporting a lost or stolen weapon is easy, it’s responsible, and it makes our streets safer.”

The legislation would require gun owners to report the loss or theft of their firearm to police within 48 hours of discovery.  (The reporting obligation does not start until the owner discover that the firearm is missing.)  Owners may report the loss or theft to their local police department or any Delaware State Police Troop.  Violators will be subject to a fine of $100 to $500 for a first offense.  Second and subsequent offenses would be class G felonies.

“This is part of a larger, multi-dimensional approach we are taking as a state to address gun violence,” said Lt. Governor Matt Denn. “From reporting lost and stolen weapons to ensuring mental health services for our children and more programs for them after school and in the summer, Delawareans should be working together to address the issue of gun violence and moving towards a safer Delaware for all of us.”

“This is a common-sense proposal that will help law enforcement keep guns out of the hands of criminals,” Biden said. “All too often prosecutors in my office are confronted with defendants who claim their weapon was lost or stolen, when in reality that gun was purchased and then immediately handed over to a criminal who is not legally allowed to have a gun. Under this bill, if a gun is legitimately lost or stolen, the police will know right away. This is an important piece of our balanced approach to reduce gun violence and protect our children.”

“It is our intention to promote common sense gun safety legislation. This will be directed towards the safety of all Delawareans and the rights of law abiding and responsible owners of firearms,” said Lewis D. Schiliro, Secretary of Safety and Homeland Security.

“We need to do a better job of tracing weapons used in crimes.  This bill will provide police with an important tool in doing just that,” said Sen. Henry.  “In addition, this bill will also promote more responsible gun ownership by requiring people to notify law enforcement when their weapon is missing.”

WILMINGTON, Del., (Monday, February 18, 2013) – On Tuesday, February 19th, Lt. Governor Matt Denn will visit Mount Pleasant Elementary School to present them with their banner for being a 2012 winner of the state’s Reward, Recognition and Distinguished Title I Schools and Schools of Continued Excellence Awards.

Mount Pleasant is a Recognition School, chosen for exceptional performance and/or closing the achievement gap. Lt. Governor Denn will be joined by Principal Joyce Skrobot, teachers and students. He will visit classrooms, talk with students and administrators during his visit. He will meet with their Teacher of the Year and stop by the school spelling bee.

The Lt. Governor will then visit West End Neighborhood House where he will talk with approximately 25 students in the adult education and workforce development classes.

Finally, Lt. Governor Denn will participate in the press conference announcing a new partnership between the Delaware Alliance for Nonprofit Advancement (DANA) and Wilmington University. DANA and Wilmington University have partnered in a unique endeavor to strengthen the nonprofit sector by furthering and broadening the education of its workforce by announcing an exciting new course scholarship program for employees of the nonprofit sector, to be managed by the DANA.

WILMINGTON – We are saddened by and angry about what happened at the New Castle County Courthouse this morning.  This is an active case, so although the Governor and I have both received regular briefings on the investigation, I will defer any comments on that to our law enforcement personnel.

I have spoken to both Capitol Police officers who were injured by gunfire today, and both of them are doing well.  I had a chance to check on one officer in person, along with his family, down at Christiana Hospital earlier today.  The other officer had already been released but I spoke to him on the phone.  The Governor has spoken to both officers by phone.  We are very grateful to them for their actions today.

And our thoughts, of course, are with the families of the victims who did not survive this senseless act of violence.