The Draft 2020 Delaware Strategies for State Policies and Spending (State Strategies) document and maps have been released for public review. The review period is from March 30 – April 30, 2020.

Please join us for Virtual Public Information Sessions on April 7, 2020; two identical sessions will be held at 10:00 am and 5:30 pm. The document, maps, and supporting materials are available on State Strategies website.

The State Strategies are a culmination of extensive coordination with local governments, citizens, and state agencies. They identify the State’s goals and policies for land use, infrastructure investment, and other priorities as developed by the Cabinet Committee on State Planning Issues. The document and map work together to direct state spending to support the most efficient use of state resources.

The map shows the Investment Levels described in the document. Forty data sets are collected from a variety of state and local agencies and analyzed to determine the areas most prepared for growth.  The policies and maps are updated every 5 years to stay current with growth, land use, and demographic trends.

Delaware releases its Annual Report on State Planning Issues. This year, a visual and interactive Executive Overview was created.  This provides an easy reading experience.  A brief overview is provided for each section of the report.  The sections are: Economy, Communities, Health, Conservation, Schools, Transportation, and Data.  Additionally, links to story maps provide more detail about projects related to each section. There are links to the full document in the Executive Overview.

The annual report details activities about planning, land use, and development trends in Delaware. It also highlights projects from many state agencies. These projects help revitalize communities, foster economic development, and preserve our natural and cultural resources.

The Office of State Planning Coordination (OSPC) prepared the report for the Cabinet Committee on State Planning Issues (CCSPI). The CCSPI is an advisory body to Governor Carney regarding land use planning. Their role is to promote orderly growth and development, encourage efficient use of state resources, and align with the State’s planning goals.

Please note, the story maps are only compatible with the following internet browsers: Microsoft Edge, Chrome, Safari, and Firefox.

Governor Carney officially designated four new Downtown Development Districts – in Delaware City, Middletown, New Castle and Clayton. Investors who make qualified improvements to residential, commercial or industrial properties in those districts now may qualify for state and local development incentives, including a rebate of up to 20 percent of eligible costs upon completion of the project.

“The Downtown Development Districts program is already bringing significant private investment to the eight currently designated cities and towns, and I am thrilled to welcome these four new designations to the program,” said Governor John Carney. “This expansion continues our commitment to revitalizing our downtown business districts and surrounding neighborhoods.”

Since the first reservation awards in April 2015, the DDD program has been a catalyst for private investment in the eight Delaware downtowns previously designated. Those districts are: Dover, Georgetown, Harrington, Laurel, Milford, Seaford, Smyrna and Wilmington. To date, $31.6 million in rebates through the program has leveraged $597 million in private investment in those designated downtown districts.

Governor Carney made the announcement in downtown Delaware City on Monday morning, joined by local officials representing the new districts.

“We are excited about the transformation that will occur in downtown Delaware City thanks to this program. We want our residents to be able to live, work and enjoy themselves in our downtown, and this designation will go a long way to helping us achieve that,” said Delaware City Mayor Paul H. Johnson, Sr.

“The City of New Castle is honored to accept the Governor’s Downtown Development District designation, and we are excited to see the positive changes this program can have for our community,” said New Castle City Mayor Michael J. Quaranta. “Investors looking to make improvements in our city now have another incentive to help further strengthen our community.”

“The Town Council and I are committed to continuing the economic growth in Middletown, particularly within the main commercial district,” said Middletown Mayor Ken Branner. “We firmly believe this designation, combined with significant local incentives, will encourage private investment in the downtown areas that have been left out of current development.”

“This Downtown Development Districts designation provides a wonderful opportunity for the Town of Clayton to jump start our revitalization,” said Clayton Vice Mayor Alex Dias. “By participating in the program, our downtown is certain to prosper, maintain its character, and be the center of our community.”

The DDD program is administered by the Delaware State Housing Authority (DSHA). In October, DSHA will launch a new funding round for large projects in each of Delaware’s Downtown Development Districts. Nearly $8 million in funding will be available for projects statewide. Applications to fund small projects are accepted on a rolling basis.

“We’re thrilled to work with homeowners, developers, and small business owners to drive investment in all of the newly-designated districts,” said Anas Ben Addi, Director of the Delaware State Housing Authority. “This program is already successful in the eight current districts, and we look forward to even more progress statewide.”

Governor Carney announced in February that the DDD program would expand through new district designations. Delaware’s Office of State Planning Coordination led the process to review the applications and designate the new districts. Applications were scored based on the town or city’s need for Downtown Development District incentives, the jurisdiction’s downtown revitalization plan and the creativity of its incentive package.

“All of Delaware’s towns and cities are unique, and I am so pleased that we were able to expand this program to the four diverse communities being recognized today,” said State Planning Director Constance Holland. “The best part of this program is that it supports such a wide range of redevelopment activities so each town can thrive. This program demonstrates that the state supports all of our local governments and their visions of economically vibrant, healthy, and complete communities.” 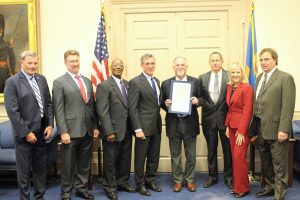 On May 14, 2019 Senate Bill 7 was signed by Governor John Carney which formally creates the Delaware Population Consortium (DPC). The DPC has prepared, without formal designation, a unified set of statewide population projections annually since 1975. This new legislation formalizes the DPC, identifies its membership and work products, and requires that all counties, municipalities, school districts, and State agencies use the DPC projections for planning and policy purposes.

Having one authoritative set of demographic and population projections for Delaware is vital to efficient and effective land use planning, economic development, school planning and other state functions. This legislation is an important implementation measure from Governor Carney’s Government Efficiency & Accountability Review (GEAR) initiative. It will ensure that all State, county and local agencies are using one mutually agreed upon set of population projections and as such encourage efficiency and transparency in government.

The Delaware Office of State Planning Coordination (OSPC) is proud to unveil our redesigned website Friday, August 31, 2018. This redesign improves the way information is delivered to citizens, developers and municipal stakeholders. A key objective of the redesigned site is to enable users to access our information from any device (PC, mobile phone, or tablet). The new website includes a GIS based tool for searching and finding Preliminary Land Use Service (PLUS) project information which significantly improves the user’s experience. Also included in the redesign is a Comprehensive Plan Database which provides links to documents related to the adopted and certified comprehensive plans and plan amendments from all local jurisdictions. Please visit the new OSPC website to learn more about the office and services we offer.