DEPARTMENT OF SAFETY AND HOMELAND SECURITY

Lt. Col. Zebley, 50, assumes command of the State Police following the retirement of Col. Nathaniel McQueen Jr. Lt. Col. Zebley, a 28-year veteran of the State Police, is currently responsible for Internal Affairs, Information Support Services and Planning. She joined the Executive Staff in 2010 at the rank of Major with oversight of the Budget, Training Academy and Human Resource sections. In 2013, she transitioned to the role of Operations Officer overseeing New Castle County Patrol Troops and Criminal Investigations, as well as the statewide Traffic Section. Her former assignments include patrol Trooper, Training Academy Officer, Patrol Sergeant, Public Information Officer, Fiscal Executive Officer, and Troop Commander.

Lt. Colonel Zebley has also served as the Officer in Charge of the Honor Guard and as a member of the Division’s Critical Incident Stress Management Team.

“Lt. Col. Zebley has a tremendous track record of leadership at the Delaware State Police, and is the right person to lead our largest police agency” said Governor Carney. “A 28-year veteran of the State Police, Lt. Col. Zebley has the trust of community leaders not only in New Castle County, but up and down our state. I know she will build on the good work of Colonel McQueen to keep Delaware safe and continue to establish trust between law enforcement and the communities they serve. Thank you to Lt. Col. Zebley for taking on this important challenge.”

“Having served in almost every leadership position within the Delaware State Police, Lt. Col. Zebley not only possesses the qualifications, skills and experience to lead the State’s largest police agency but has also earned the respect of her fellow troopers and the Delaware law enforcement community. She has demonstrated the temperament, demeanor, and wisdom necessary to navigate the challenges in policing today and is committed to serving the citizens of our State, said Acting Secretary Chandler.

“I am humbled and honored to serve as the 26th Superintendent of the Delaware State Police. I thank Governor Carney and Acting Secretary Chandler for their faith in me to lead this division of professional and dedicated members. I pledge to serve with the dignity and honor befitting the high standards of the agency,” Lt. Col. Zebley said. “The Delaware State Police remain steadfast in our mission of service to all citizens and will continue on our course of community collaboration and progressive policing.”

Lt. Col. Zebley earned a Bachelor of Science degree in Criminal Justice from the University of Delaware and a Master of Science degree in the Administration of Justice from Wilmington University. She is also a graduate of the Northwestern University School of Police Staff and Command and a graduate of the 235th Session of the Federal Bureau of Investigation (FBI) National Academy. In addition, she is a graduate of the Anti-Defamation League’s Advanced Training School course on Extremist and Terrorist Threats and is currently attending the 43rd Session of the FBI’s National Executive Institute.

Lt. Col. Zebley is an instructor for the Delaware Leadership Development Program, a three-week school targeted for first line supervisors. Since 2003, she has served as an adjunct faculty member at Wilmington University, teaching in the undergraduate and graduate Criminal Justice Programs. 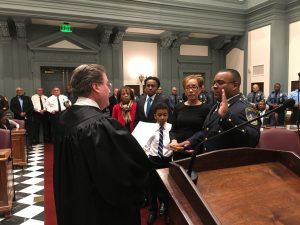 The intervention program, developed in 2013 by Capitol Police Chief John Horsman, provides protection for people involved in domestic violence-related court appearances. Cases involving incidents of domestic violence can often be volatile. The program evaluates the risk of potential violence and provides any necessary protection to anyone involved in the case via security details and escorts, said Capitol Police Lt. Britt Davis, who oversees the program.

“It takes a team to put together a program like this,” Davis said. “It’s an honor to be the first recipient of this award. Beau had a huge impact as attorney general and through his focused efforts toward helping victims.”

The program is the first of its kind in the nation, according to Davis. Since it began, the program has provided 248 security details.

“I am very proud of the members of the Delaware Capitol Police and the fine work they do. This program is yet another example of the initiative they take in ensuring the public’s safety and exemplifies the care they have for our domestic violence victims,” said James Mosley, Secretary, Department of Safety and Homeland Security.

The award is named after Delaware’s former Attorney General and is administered by the state’s Criminal Justice Council. It recognizes programs that provide effective services that address criminal justice issues in Delaware’s communities.

“We thought that the program being utilized by Capitol Police was the most appropriate nominee this year and we’re really pleased to give it to them,” said Criminal Justice Council chair and Dover attorney James Liguori. “They are worthy of the award in honor of Beau.”

“This award is a fitting way to honor our former attorney general and the winning program perfectly captures Beau’s mission in life: standing up for and protecting victims,” said Christian Kervick, executive director of the Criminal Justice Council. “While this is the first award given, it is our hope that each year we will be able to select a program that honors Beau’s legacy of service.”

A few of the other programs nominated for this year’s award include:

The Criminal Justice Council selects nominations from the community, current and recent-past sub-grantees. Agencies are invited to nominate a program(s) that exemplifies excellence in improving the criminal justice system or provides effective services to those in need in our communities.

The Nomination Form and selection criteria are available on the CJC’s website. http://cjc.delaware.gov/AnnualBeauBidenAward.shtml

The CJC will be accepting nominations for the 2017 Beau Biden Award during the late spring or early summer months. Applicants should provide a brief description of their program, how it may work in collaboration with other programs to achieve their goals, the most significant achievement of the program and other facts that will help the award committee in making their determination.

An Award Selection Committee will give particular consideration to those programs that are innovative and demonstrate positive results.

Please contact Scott McLaren, Deputy Director of the Criminal Justice Council, at (302) 577-8693, or Scott.McLaren@delaware.gov, with questions about the award.

Please contact Wendy Hudson, Chief of Community Relations with the Department of Safety and Homeland Security, at (302) 744-2680, or wendy.hudson@delaware.gov, with questions about Capitol Police’s program.