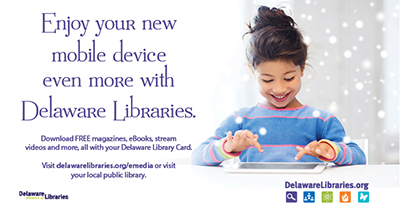 Gifting a new smartphone, tablet, or eReader this year? Delaware Libraries have the collections needed to make the most of the latest digital devices!

Our eMedia collection contains over 30,000 eBooks, eAudiobooks, eMagazines, and more, available for free with a Delaware Library Card.

Holiday “gift cards” are available to print and slip into greeting cards to let recipients know about the libraries’ eMedia collections! To download one to print, just visit: delawarelibraries.org/eHoliday

Browse the collections at delawarelibraries.org/eMedia. Borrowed titles are automatically returned at the end of the lending period (with never any late fees).

About:
The Delaware Division of Libraries, a state agency dedicated to unleashing the potential in all Delawareans in partnership with Delaware Libraries, offers free access to the online catalog; Wi-Fi; computers/internet; eBooks, programs/workshops, community partnerships, and more.

Until now, Delawareans looking to form an entity directly with the state had to file through the mail or in-person at the Division of Corporations offices in Wilmington or Dover. With this new service, residents can complete the task online or at a Delaware public library with help from a librarian. This new option is quick, safe and cost-effective.

“The collaborative effort puts a terrific resource in the hands of our residents, and is exactly the direction we want to be headed in: Supporting local companies looking to create business structures that will enable expanded growth and success,” said Governor Markell.

Registration services on the Division of Libraries’ online platform have been customized for Delaware businesses, with the backing of the Division of Corporations as well as Delaware’s extensive public library network. The registration service will reside on the Delaware Libraries Entrepreneurship Community page, with other online tools and resources designed to support budding businesses.

“More than 1.2 million legal entities are incorporated in Delaware from around the world. I’m pleased that CT Corporation and IncNow took up the challenge of creating a product specifically targeted to the needs of small Delaware-based businesses,” explained Rick Geisenberger, director of the Division of Corporations. “By partnering with trusted agents and public libraries, we can further ensure that local entrepreneurs have convenient access to services they need when it comes time to start a business.”

“This partnership with Global Delaware is a great opportunity for us to add expert tools that support microbusinesses here in the State,” said State Librarian Dr. Annie Norman. “Delaware Libraries serve as a hub for connecting Delawareans with the information and resources they need to help them move forward with their plans to launch a new business.”

Librarians across the state received training on the new business registration platform in order to assist Delawareans who want to use the service. In addition, the new online service includes dedicated helplines staffed by professionals from IncNow and CT Corporation who will help walk users through the process and answer questions.

“State agencies continue to work together to help Delaware businesses become more informed, supported and competitive,” said Andrea Tinianow, director of Global Delaware. “We hope the local business community will take full advantage of this newest resource, and to let us know how else we can help.”

Launch of Plazas Comunitarias at the Bear Library

The Delaware Division of Libraries partnered with the Mexican Consulate to pilot this program at the Bear Library in New Castle County. If successful, the intent is to expand the program to libraries in Kent and Sussex counties. The first class is at capacity with 15 students.

The Library of Congress recently announced the winners of its “A Book That Shaped Me” Summer Writing Contest, a program that asks rising fifth- and sixth-graders to reflect on a book that has made a personal impact in their lives. A Brandywine Hundred Library patron, Rachel Smookler, was the 1st Place Grand Prize & Delaware State Winner. Rachel wrote about Jack and Louisa: Act 1 by Andrew Keenan-Bolger and Kate Wetherhead.

Nearly 300 young readers submitted essays to participating public libraries in the Mid-Atlantic region in this fifth year of the contest. Launched in 2012 with the DC Public Library, “A Book That Shaped Me” expanded with the help of public libraries in Washington, D.C., Maryland, Virginia, Delaware, Pennsylvania and West Virginia. The local libraries offered the contest as part of their summer-reading programs.

Five finalists per state were chosen in an initial round of judging. The finalists each will receive a $50 gift-card prize.

Judging was conducted by members of the American Association of School Librarians (AASL), a division of the American Library Association (ALA). The AASL works to ensure all elementary- and secondary-school librarians participate as collaborative partners in the teaching and learning process.

The grand-prize judging round, which selected state and grand-prize winners from the pool of state finalists, was conducted by a panel assembled by the Library of Congress that included educators, children’s authors and Library of Congress staff. This year’s guest author judge was Jason Reynolds, recipient of the Coretta Scott King/John Steptoe Award for New Talent, who was a presenter at the 2016 National Book Festival.

Each state winner will receive another $50 gift-card prize. The first-, second-, and third-place grand-prize winners will be awarded additional gift-card prizes in the amounts of $200, $150 and $100 respectively.

Grand-prize winners read their essays during the “A Book That Shaped Me” awards presentation at the Library of Congress National Book Festival. The contest presentation took place at the Walter E. Washington Convention Center in Washington, D.C., on Saturday, Sept. 24, 2016 and was emceed by Eun Yang, NBC4 Washington television anchor.

About:
The Delaware Division of Libraries, a state agency dedicated to unleashing the potential in all Delawareans in partnership with Delaware Libraries, offers free access to the online catalog (delawarelibraries.org); Wi-Fi; computers/internet; eBooks, programs/workshops, community partnerships, and more.

The Library of Congress is the world’s largest library, offering access to the creative record of the United States—and extensive materials from around the world—both on site and online. It is the main research arm of the U.S. Congress and the home of the U.S. Copyright Office. Explore collections, reference services and other programs and plan a visit at loc.gov, access the official site for U.S. federal legislative information at congress.gov, and register creative works of authorship at copyright.gov. 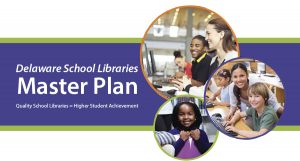 The Delaware School Libraries Master Plan summarizes the current status of school library services, addresses future trends, and informs solutions for development. It was conducted by the Institute for

Public Administration (IPA) at the University of Delaware and Himmel & Wilson, Library Consultants. IPA has an extensive project management and strategic planning background in the public sector. Himmel & Wilson specializes in evaluation and planning services for libraries.

“Delaware’s school libraries, along with our public library system, are tremendous assets that foster a love of learning and drive academic and career opportunities,” Governor Markell said. “I appreciate the School Libraries Council for undertaking this comprehensive study, which demonstrated the impact school libraries can have in improving student achievement, and I welcome the ongoing discussion about ways to more fully support them in the years ahead.”

“Congratulations for these efforts to connect the public and school libraries. This connection will improve access to resources and enhance the lives of students and their families” said Representative Valerie Longhurst, who is leading a pilot to integrate school libraries into the Delaware Library Catalog.

“Delaware has made a great investment in upgrading the services offered to residents in our 33 public libraries across the state,” said Secretary of State Jeffrey Bullock. “The Delaware School Libraries Master Plan provides recommendations to ensure students will have the resources they need to be successful within their schools.”

“This is a tremendous opportunity for our school librarians, teachers, administrators, students and families to help us coordinate important services and resources across our state and between our public school and library systems,” said Secretary of Education Steve Godowsky.

This school library planning process builds upon the strategic Statewide Master Plan for Delaware Public Libraries which resulted in significant improvements in public library buildings and sharing of library collections statewide through the Delaware Library Catalog. “A statewide strategic approach to all library services will support Delawareans in achieving potential in their education, career, and throughout life,” according to Dr. Annie Norman, State Librarian and Chair of the Delaware School Libraries Council.

The Executive Summary and full report are available at: http://www.ipa.udel.edu/publications/delaware-school-libraries-master-plan2016.pdf

School administrators and community leaders are encouraged to submit a request to the Council for a local presentation on the recommendations by contacting Dr. Annie Norman, Chair, at annie.norman@delaware.gov.

The Delaware Division of Libraries is a state agency dedicated to unleashing the potential in all Delawareans in partnership with Delaware Libraries.