Wilmington, DE – Building on ongoing efforts in the state to address the addiction epidemic, Governor Markell was joined by White House officials today to announce federal funding to support a new initiative that will partner law enforcement officers and public health officials to address heroin and prescription drug abuse. (Full release below) The announcement comes less than one week after Governor Markell detailed the state’s priorities for the $4.45 million in new resources provided by the Fiscal Year 2016 budget.

Through his budget proposals of the past two years, the Governor has successfully led efforts to expand access to treatment, including through the opening of a new withdrawal management clinic to serve the southern part of the state, and better match withdrawal services to individual needs, rather than a one-size-fits-all approach.

“While we need to do more to stop the flow of drugs into our cities, suburbs and rural areas, we know we cannot arrest our way out of this health crisis,” said Governor Jack Markell. “In order to truly reduce the number of people and families impacted by addiction, we must convince active users that treatment is available, it does work, and they can recover and thrive. This federal funding will support ongoing efforts in Delaware to address the addiction epidemic and we are grateful for the support of Director Botticelli, along with the tireless advocacy of Delaware’s Congressional delegation.”

“New Castle County is not immune to the heroin epidemic, and this program will help law enforcement combat this problem that affects communities all across the country,” said U.S. Sen. Tom Carper. “It will take an all-hands-on-deck effort to seek out the root causes and fix them. It is through partnerships with law enforcement, the community, and other cities across the country that real change can happen and this program will help to make that change a reality.”

“The addition of New Castle County to the High Intensity Drug Trafficking Areas Program strengthens existing efforts in Delaware,” said U.S. Congressman John Carney. “This investment will help provide much-needed resources for us to better address heroin and prescription drug abuse. I appreciate the Administration’s commitment to ending this epidemic, and I look forward to continuing to work together at the local, regional, and federal level to combat drug abuse and strengthen our communities.”

Created by Congress in 1988, the HIDTA program serves as a catalyst for coordination among Federal, state, local, and tribal law enforcement agencies operating in areas determined to be critical drug trafficking regions of the United States. Law enforcement organizations working within HIDTAs assess drug-trafficking issues and design specific initiatives to decrease the production, transportation, distribution, and chronic use of drugs and money laundering. There are currently 28 HIDTAs located in 48 states, as well as in Puerto Rico, the U.S. Virgin Islands, and the District of Columbia.

Today, the Office of National Drug Control Policy announced a total of $13.4 million in funding for HIDTA programs across the country.

The Heroin Response Strategy will foster a collaborative network of public health-public safety partnerships to address the heroin/opioid epidemic from multiple perspectives. The Strategy will enhance the efficacy and efficiency of the criminal intelligence process in support of cooperative law enforcement operations. The five HIDTAs will create a 15-state network of experienced, connected law enforcement contacts and leverage these connections and information-gathering capabilities with a strong, complementary, analytical capacity.

The five HIDTAs will select two centrally located Regional Coordinators, one with a public health focus and the other with a public safety focus, who will manage and oversee implementation and operation of the Heroin Response Teams. The Public Health Coordinator will oversee regional reporting of fatal and non-fatal overdose information and issuing of relevant alerts regarding dangerous batches of heroin and other heroin-related threats to health authorities. This will mobilize a rapid public health response to distribute naloxone or expand resources in the affected areas, helping to mitigate the number of overdoses and prevent deaths. The Public Safety Coordinator will oversee execution of public safety goals by ensuring case support is provided where needed and intelligence is being disseminated to relevant law enforcement authorities to enable disruption of the heroin supply.

A heroin and prescription opioid training curriculum will be developed and used to prepare rural and municipal officers and first responders who are inexperienced responding to heroin and prescription opioid-related incidents. To assist communities in coping with this escalating problem, the five HIDTAs will develop Education & Training strategies that will increase awareness of heroin and opiate addiction, create linkages to available prevention and treatment resources in the respective regions, and enable first-responders to know how to report all pertinent lead information developed from seizures and overdose responses.

The Heroin Response Strategy builds upon the successes of the 2014 symposium hosted by the Washington/Baltimore HIDTA.  Each year, the five HIDTAs will host two, two-day State of the Region symposia at a jointly nominated HIDTA.  These symposia will build additional structure within each respective HIDTA region for the attendees to maintain regular contact and continue their public health-public safety partnerships between symposia. The aim will be to facilitate collaboration between public health and public safety partners within and across jurisdictions, sharing best practices, innovative pilots, and identifying new opportunities to leverage resources.

The Obama Administration’s drug policy treats the national drug challenge as a public health issue, not just a criminal justice issue.  This approach is built upon the latest scientific research demonstrating that addiction is a chronic disease of the brain that can be successfully prevented and treated, and from which one can recover.

The Administration has directed Federal agencies to expand community-based efforts to prevent drug use before it begins, empower healthcare workers to intervene early at the first signs of a substance use disorder, expand access to treatment for those who need it, support the millions of Americans in recovery, and pursue “smart on crime” approaches to drug enforcement.

For more information about the Office of National Drug Control Policy, visit: www.whitehouse.gov/ondcp

Governor Markell Marks Next Stage in Fight against Addiction Epidemic

Harrington, DE – Responding to the need for increased addiction treatment and recovery services statewide in the face of an epidemic that claims a life from overdose every other day, Governor Markell joined Department of Health and Social Services Secretary Rita Landgraf and other leaders today to detail the state’s priorities for the $4.45 million in new resources provided by the Fiscal Year 2016 budget.

Speaking at the construction site for a new withdrawal management clinic in Harrington, Governor Markell said that facility exemplifies the state’s commitment to serve the thousands of Delawareans and their families affected by the state’s addiction epidemic. In 2014, there were 185 suspected overdose deaths in Delaware, or about one every other day. Across the country, Delaware ranked 10th for overdose deaths. Almost 10,000 Delaware adults sought public treatment in 2014, with about one-third of those adults indicating heroin as their primary drug at the time of admission.

“The addiction epidemic is straining our public system beyond its capacity, with many people turned away for services when they are ready for treatment, or being forced to wait for services or supports to open up for them,” said Governor Markell, who proposed additional resources to treat substance use disorders in his State of the State address and FY2016 budget proposal. “I am grateful these new resources to increase treatment capacity remained in the budget, and I applaud members of General Assembly for holding steadfast to a commitment to increase treatment and recovery services, especially in a challenging fiscal environment.”

The withdrawal management clinic, operated for the Department of Health and Social Services by Connections Community Support Programs, Inc., is expected to open within a month to serve people in need, especially those in Kent and Sussex counties. The state’s other withdrawal management clinic is in New Castle County. With $750,000 in funding, both clinics will match withdrawal services to the individual’s needs, rather than using a one-size-fits-all approach. Both programs will have:

Secretary Landgraf detailed the state’s efforts to fight addiction on three fronts: prevention and education; treatment and recovery; and criminal justice. She cited the training and increased use of the overdose-reversing medication naloxone among members of the community and law enforcement, the use of the Good Samaritan/911 Law to allow people to call in overdoses without risking arrest for minor drug offenses, and an ongoing underage and binge drinking prevention campaign.

“We know all too well that addiction is indeed a disease of epidemic proportion, one that does not discriminate and that takes a toll every day on Delaware families,” Secretary Landgraf said. “With the help of these new state resources, we will continue to embrace communities of recovery such as the one being built in Harrington.”

“For far too many individuals across our state, their addiction is a primary driver of destructive behavior that puts them into contact with the criminal justice system,” Commissioner Coupe said. “Increasing the number of treatment facilities in the community will ensure those who return to the community from a period of supervision by our department will have an opportunity to continue to participate in the addiction-related treatment they need to stay clean and sober, break their cycle of criminal behavior, and support their successful reentry to society.”

Mike Barbieri, the new director of DHSS’ Division of Substance Abuse and Mental Health (DSAMH), detailed the priorities for the remainder of the $4.45 million in new funding. It would allow DSAMH to: 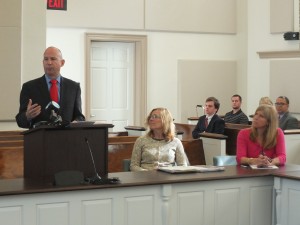 “Across our state, too many of our neighbors and their family members are impacted by their loved one’s addiction to heroin, prescription drugs, alcohol or other substances,” said Governor Markell. “We must remain committed to opening the doors to addiction treatment because people deserve the opportunity to reach their full potential, free from the pain that addiction brings.”

Part of the efforts unveiled include establishing a new withdrawal management treatment center in Sussex County to serve individuals who live downstate. Currently, the State operates one detox center, NET Kirkwood Detoxification Center, in New Castle County. In addition, the State plans to offer more individualized treatment services at both locations through variable lengths of stay and increased supervision for those who require intense monitoring.

Funding for the new facility, which totals $950,000, is part of the $1 million that was approved by the General Assembly for FY15 to address gaps in the State’s drug treatment services after the Governor called for additional resources in his State of the State address. The other $50,000 of those funds will allow the Delaware Division of Public Health to work closely with Delaware school nurses to expand the “Smart Moves, Smart Choices” prescription drug abuse education and prevention campaign statewide.

“Above all else, we will achieve our greatest success if we can educate and prevent substance use among our young people,” said Governor Markell. 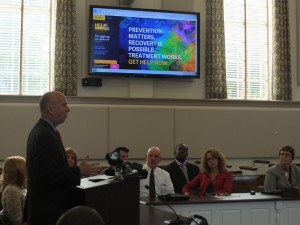 Recognizing the importance of education and prevention in addressing the addiction epidemic, the State also launched www.HelpIsHereDE.com, an information website that puts an emphasis on prevention, treatment and recovery; and announced the launch of a public awareness campaign that will support the website and focus on reducing the stigma associated with addiction.

The Governor also expressed his gratitude to Members of the General Assembly, including Senators Margaret Rose Henry and Bethany Hall-Long, as well as Representatives Mike Barbieri, Helene Kelley and Michael Mulrooney, who have worked with the Department of Health and Social Services (DHSS), advocates, health care providers and other community leaders to help shape the state’s priorities to address addiction.