“Over the next few weeks the world’s attention will turn to Brazil as 11,000 athletes from more than 200 countries compete in the Summer Olympic Games,” Governor Markell said. “They are an inspiration to me, and a great example to our young people – whatever their dreams are. And that will keep Delaware moving forward.”

Philadelphia 76ers Acquire NBA D-League Franchise; Relocate it to Delaware and Name it the Delaware 87ers

The “Sevens” will play their home games at the University of Delaware’s Bob Carpenter Center located in Newark, Games to begin in November

PHILADELPHIA, PA. – The Philadelphia 76ers announced today that they have completed the purchase of the operating rights for a team to compete in the 17-team National Basketball Association Development League. T

he NBA D-League is the NBA’s only minor league. The acquired operating rights were previously held by the Utah Flash, a team that went on hiatus two seasons ago. The Philadelphia 76ers’ new NBA D-League franchise will relocate to Delaware and commence play this coming autumn for the 2013-14 NBA D-League season, which runs from November through April. The team will be known as the Delaware 87ers, and will be nicknamed the “Sevens.” It will play its games on the campus of the University of Delaware at The Bob Carpenter Center in Newark, Del.

“The creation of the Delaware 87ers is an important milestone in our quest to ensure that the Philadelphia 76ers are viewed in all respects to be a world-class and cutting-edge NBA franchise. We believe that the ability to own and operate our own NBA D-League affiliate will strengthen our player development and other team initiatives, and be a tremendous asset to the entire Sixers organization,” said Sixers Managing Owner Josh Harris. He continued, “We are particularly excited that we can situate the team in the welcoming, nearby state of Delaware, especially since there are so many Delawareans who already are avid 76ers fans.”

“The team name gives a great nod to our first state and brings with it lots of good luck, I assure you,” said Governor Jack Markell. “We welcome the team to Delaware where many fans await the next season ahead. We promise a hometown spirit of support as the ‘Sevens’ build a new basketball legacy for Delaware, for the region and for the sport. There will be some great games to watch here.”

“Everyone at UD is excited to welcome the Delaware Sevens to Newark,” said University of Delaware President Patrick Harker. “Having the Sevens play in the Bob Carpenter Center gives us a great opportunity to showcase the UD campus, and it gives our neighbors a fun, exciting activity they can share with their families. I know the players want to be an engaged presence in the local community, and I look forward to seeing them around town.”

The team name “87ers” was selected in recognition of Delaware’s place in United States history, as it was the first state to ratify the U.S. Constitution on December 7, 1787. The 87ers name also is immediately evocative of the parent “76ers,” a name similarly derived from Philadelphia’s place in U.S. history with the Declaration of Independence being signed there in 1776. The 87ers team will also be nicknamed the “Sevens,” a nod to the way the parent club’s official name is often shortened to the “Sixers.”

“We’re thrilled to work with the 76ers to bring NBA D-League basketball to Newark and the state of Delaware,” said NBA D-League President Dan Reed. “Having a record 12th NBA team invest in their own NBA D-League team shows our development system for top NBA prospects is working, and highlights the league’s continued growth. We’re very excited to share our world-class brand of basketball, affordable family-friendly entertainment, and community engagement with all Delawareans.”

Adam Aron, CEO and Co-Owner of the 76ers, praised the role Delawareans played in making today’s announcement possible, “I want to thank the entire political leadership of Delaware, and especially the executives and staff of the University of Delaware, for their warm embrace of support and for the key roles that they all played in making it possible for us to bring the Sevens to Delaware. We look forward to engaging with the countless basketball fans throughout the state, as both individual fans and businesses across Delaware share with us the energy, joy and family fun that this new 87ers team will create.” 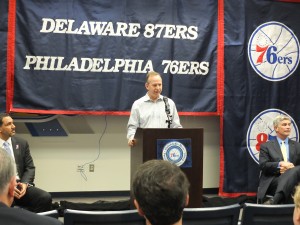 “The Sixers have recognized what we in Delaware have known for a long time – the First State has great sports fans,” said U.S. Sen. Tom Carper of Delaware. “I look forward to catching some Sevens games at the Bob next season!”

“Sixers games have long been a great source of fun for so many Delaware families, including mine, so this really is exciting news,” said U.S. Sen. Chris Coons of Delaware. “Delaware loves the Sixers and will undoubtedly love the Sevens. This news is a sign of the 76ers’ appreciation for their Delaware fans and of their commitment to this community. I look forward to bringing my kids to Sevens games this fall, and to further strengthening the ties between our state and this historic franchise.”

“As a lifelong Sixers fan, I’m thrilled to welcome the Sevens to our state,” said Representative John Carney of Delaware. “Delaware families can now enjoy watching professional basketball in our own backyard. This partnership is good news for Delaware, good news for the Sixers, and good news for those of us who take pride in rooting for our hometown teams.”

Images of the Delaware 87ers logos are attached.

ABOUT THE NBA DEVELOPMENT LEAGUE:
The NBA Development League, founded in 2001, is the NBA’s official minor league and featured 16 teams this past season all with direct affiliation to NBA franchises. In addition to players, the NBA D-League helps the NBA develop coaches, referees and front office staff. The NBA D-League season is comprised of 50 regular season games, along with a postseason, and runs from November through April.

ABOUT THE PHILADELPHIA 76ERS:
The Philadelphia 76ers are one of the elite franchises in the National Basketball Association and have achieved the third most wins in league history, as well as the third most playoff appearances of any team in the NBA along with three World Championships. Some of the greatest players ever to play the game have appeared in a 76ers uniform. The Philadelphia 76ers are owned by an investor syndicate led by prominent financier Joshua Harris and play home games in Philadelphia’s Wells Fargo Center.

ABOUT THE DELAWARE 87ERS:
The Delaware 87ers of the National Basketball Association Development League (NBADL) were relocated to America’s first state in 2013 and named to commemorate the year in which Delaware ratified the U.S. Constitution, 1787. The Sevens are the NBADL affiliate of the NBA’s Philadelphia 76ers, and are owned by the Sixers. The 87ers play at the University of Delaware’s Bob Carpenter Center in Newark, Del.