DOVER, Del. – Governor John Carney on Wednesday issued the following statement on the Delaware Senate’s confirmation of Cerron Cade to serve as Secretary of the Delaware Department of Labor:

“Cerron has the knowledge and experience necessary to take on this important role, and I want to thank members of the Delaware Senate for their vote of confidence in confirming his nomination. The Department of Labor’s work connecting Delawareans with job training and workforce development programs has never been more important. Cerron understands the needs of Delaware businesses from his time at the Delaware’s Small Business Division and, before that, at the Delaware Economic Development Office. Cerron has a proven ability to lead, and I’m confident that his experience will serve Delaware taxpayers and workers well.” 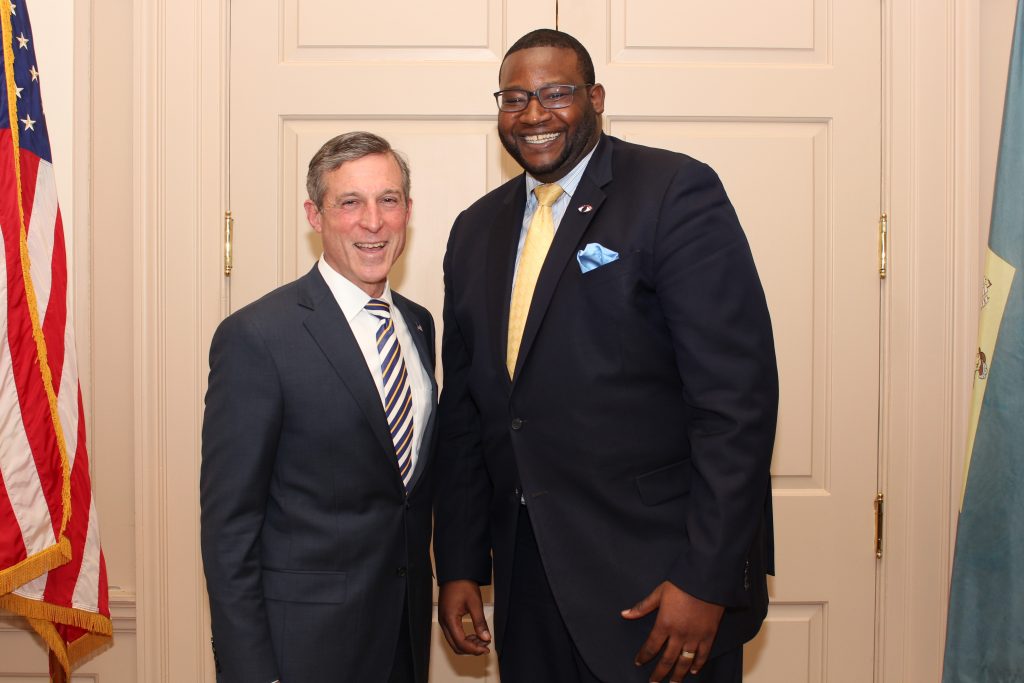 Last year, as Acting Director of the Delaware Economic Development Office (DEDO), Cade managed the dissolution of DEDO and the creation of the new Division of Small Business, Development, and Tourism within the Delaware Department of State. Currently, he serves as the Division’s Director, leading a team responsible for providing key services to Delaware businesses, administration of the Delaware Strategic Fund, and marketing Delaware as a premier tourist destination.

During his time at DEDO and the newly-created division, Cade has led the state’s efforts to attract businesses and good-paying jobs to Delaware, keep them here, and ensure that Delaware remains a leading state for businesses to grow and thrive. If confirmed by members of the Delaware Senate, he will bring that experience to the Department of Labor, where he will lead state efforts to connect Delaware businesses with talented workers, and develop relevant workforce development and training programs.

Cade grew up in Washington D.C. and moved to Delaware to study Political Science and Law Studies at Delaware State University. Driven by a desire to make a positive impact and following his passion for public service, Cade has worked as a Legislative Aide for the Delaware State House of Representatives, New Castle County Deputy County Director for U.S. Senator Tom Carper and State Projects Director for then-Congressman John Carney.

Cade lives in Wilmington with his wife, Kasmira, and two daughters, Jonnie and Toni.

WILMINGTON, Del. – Governor John Carney on Thursday announced his appointment of Sandy Johnson – a former Director of the Delaware State Housing Authority who has significant executive experience – to serve as Acting Secretary of Delaware’s newly-created Department of Human Resources.

Governor Carney intends to nominate Johnson to serve as Secretary of the agency when the Delaware Senate reconvenes and members can consider her nomination.

“I know Sandy well, and believe she has the right mix of experience, leadership skills, and thoughtfulness to help us get this Department off the ground, and make a real difference for state employees,” said Governor Carney. “This new Department will tackle issues important to our employees, and will help us operate more efficiently across state agencies. I’m confident that Sandy is the right person for the job. Thank you to members of the General Assembly for their leadership in helping create this agency to focus attention and resources on state government’s most important asset – our employees.”

Since 2009, Johnson has been the Executive Director of the City of Camden Redevelopment Agency, working as a member of a mayoral executive team with responsibility for housing, commercial and institutional revitalization in Camden, N.J.

From 2000-2009, Johnson served as a member of then-Governor Ruth Ann Minner’s Cabinet as Director of the Delaware State Housing Authority. As Director, Johnson was responsible for more than 100 employees and the operation of mortgage finance programs, public housing in Kent and Sussex counties, the administration of federal housing tax credits, and other housing development programs. She oversaw a more than $10 million operating budget, a $100 million housing trust fund portfolio, and a $2 billion bond portfolio.

“I am deeply grateful to the Governor for this nomination. His confidence in my ability to assist in moving his agenda forward with a strong human resource infrastructure is humbling,” said Johnson. “Our Governor understands the critical role state workers play in good government, and that the time to focus on this is now.”

The new Department of Human Resources was created by House Bill 4, to help confront issues important to state employees and improve the delivery of human resources services. The new agency’s priorities will include promoting diversity and inclusion across state government, and working with the Department of Correction to address the state’s shortage of correctional officers.

Creating a new Human Resources Department was a recommendation of Governor Carney’s Action Plan For Delaware.

“Shailen has done an excellent job enhancing the State’s transportation network while earning the respect of his colleagues and the trust of our citizens,” said Governor Jack Markell. “The agency faced numerous challenges over the past several years, including the need to address a significant debt load and respond to severe weather events, but under his leadership DelDOT tackled those challenges with dedication and professionalism. While this is a big loss for the State of Delaware, I am happy he’ll have the opportunity to work with one of the best governors in the country and am confident Shailen’s experience and leadership skills will have a positive impact in Colorado.”

Secretary Bhatt was appointed by Markell in 2010. Prior to his term as Delaware’s Secretary of Transportation, he served in several leadership roles throughout the country, including Associate Administrator at the Federal Highway Administration in Washington, D.C., Deputy Executive Director with the Kentucky Transportation Cabinet, and Director of the Bowling Green/Warren County Metropolitan Planning Organization.

“Throughout my career I‘ve tried to go where I felt I could do the most good, looking for opportunities to make meaningful contributions as a public servant,” said Bhatt. “I appreciate the opportunity Governor Markell gave me and I will always treasure the time I’ve spent in Delaware. It’s been an honor to lead Team DelDOT. I’m very proud of the people I served with and appreciate their unwavering support and enthusiastic commitment towards improving Delaware’s transportation system.”

In his new role, Secretary Bhatt will lead the Department in planning for and addressing Colorado’s transportation needs. He will oversee 3,300 employees statewide and an annual budget of approximately $1 billion to help CDOT continue its mission of providing the best multi-modal transportation system for Colorado that safely and most effectively moves people, goods and information.

(Wilmington, DE) Governor Jack Markell today announced he will nominate Deputy Secretary David Small to be Secretary of the Department of Natural Resources and Environmental Control (DNREC).  He will succeed Collin O’Mara, who will become President and CEO of the National Wildlife Federation in July.  The nomination is subject to confirmation by the Delaware State Senate.

“David’s depth of knowledge and leadership on environmental issues has helped improve the quality of life for residents and visitors of our state for nearly three decades,” said Governor Markell. “His work at DNREC to make our state safer, cleaner and healthier has earned the respect of many, both in and out of State government, and his wealth of experience makes him an ideal fit to build on our efforts to address Delaware’s energy and environmental challenges.”

Small has spent the last 13 years as Deputy Secretary. He has served six cabinet secretaries during his DNREC career, which spans 27 years. Small also worked as Executive Assistant to the Secretary from 1998 until 2001, having joined the department in 1987 as Chief of the Office of Information and Education. During his tenure at DNREC, Small has led, coordinated and supported the development and implementation of many initiatives, including: establishment of the state’s aboveground storage tank program; enhancements of public reporting of environmental releases; development of the state’s Dam Safety program, assuring the safe operation and maintenance of regulated dams; coordination with agriculture and business communities on a wide range of state and federal regulatory updates; creation of the Inland Bays Pollution Control Strategy to reduce nutrients and improve water quality; and passage and implementation of universal recycling.

“I am incredibly honored to be nominated by Governor Markell to serve as Secretary,” said Small. “If confirmed, I look forward to working with our many partners and the DNREC team to build on the successful foundation of this administration by making Delaware more resilient to the impacts of climate change and sea level rise, protecting our air, land and water quality, providing diverse and quality recreational opportunities for our citizens and visitors and preserving our open spaces and biodiversity.”

Small is a former State of Delaware Employee of the Year.  He is a member of the Board of Directors of Wilmington’s Riverfront Development Corporation, on the Board of Directors of the Greater Dover Boys and Girls Club, and has represented Delaware on the Regional Greenhouse Gas Initiative.  He is a past president of the Northeast Fish and Wildlife Information and Education Association. Small, 57, is a graduate of Randolph-Macon College and resides with his family in Dover.

The Delaware Department of Natural Resources and Environmental Control employs 900 full-time professionals in 74 locations around the state and is comprised of seven Divisions:  Air Quality, Energy and Climate, Fish and Wildlife, Parks and Recreation, Waste and Hazardous Substances, Water and Watershed Stewardship. It is responsible for protecting and managing the state’s  natural resources, protecting public health and safety and providing quality outdoor recreation.