The study, The Economic Contributions of the Captive Insurance Industry to the Delaware Economy, was conducted on behalf of the DOI by the University of Delaware’s Alfred Lerner College of Business & Economics’ Center for Applied Business & Economic Research (CABER), which has produced similar economic impact studies for the Firefly Music Festival and Delaware’s horseracing industry.

CABER surveyed 1081captive insurance companies doing business in Delaware and used data from businesses providing services to those companies. The report breaks out the program’s economic impact per $1,000 spent by the DOI for the captive industry. For every $1,000 spent, 1.95 jobs are created, $83,574 in income is generated, and $4,301 in taxes are collected. Captive program spending supports 950 jobs in finance and investment industry, 447 jobs in legal, accounting and professional support, and 209 retail jobs. The complete report may be found at http://captive.delawareinsurance.gov/docs/pdfs/captive-industry-impact-on-de-econ-caber-report-201608.pdf

“I instituted the Bureau of Captive and Financial Insurance Products in 2009 and I’ve watched it grow ever since,” said Commissioner Stewart. “Thanks to my captive director, Steve Kinion, and my topnotch captive staff, we are consistently one of the top captive domiciles in the US and in the world. But until now, I don’t think many people were aware of exactly what we contribute to Delaware’s economy. The CABER report rewards my faith in captives as a revenue generator for our state.”

Captive insurance entities are owned by the companies that they insure, and are generally formed by businesses who wish to better manage the cost and administration of their insurance coverage. DOI’s captive bureau is self-sustaining and currently contributes an annual surplus in tax and fee revenue of over $3 million to the Delaware general fund.

The proclamation recognizes Delaware as one of the foremost captive domiciles in the world, currently the sixth largest globally and the third largest nationwide. DOI’s captive bureau is self-sustaining and currently contributes an annual surplus of tax and fee revenue of over $3 million to the Delaware general fund. Captive insurance entities are owned by the companies that they insure, and are generally formed by businesses who wish to better manage the cost and administration of their insurance coverage.

“When I took office in 2009, Delaware was home to only 38 captive insurance companies, I immediately saw the revenue potential for growing our captive insurance business,” said Commissioner Stewart. “I promptly formed the Bureau of Captive and Financial Insurance Products. Since then the bureau has generated more than $11 million in revenue.”

“I want to thank the Governor and the General Assembly for their continued cooperation in making Delaware a friendly place for corporations around the country and the world to do business,” said Stewart. “Of course Delaware’s unique Court of Chancery also deserves credit for establishing a stable and reliable legal environment in which captives can thrive.”

AWI‘s parent company, American Water, was founded in 1886 and is the largest and most geographically diverse publicly traded water and wastewater utility company in the United States.

AWI will receive formal recognition as Delaware’s 1000th captive at the Delaware Captive Insurance Association Fall Forum on November 12 at the Chase Center on the Riverfront in Wilmington. 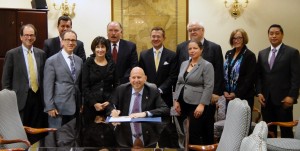 DOVER, DE (February 12, 2015) – Insurance Commissioner Karen Weldin Stewart announced today that the captive insurance bureau she formed shortly after taking office in 2009 continues to exceed expectations.  “I am very pleased that the captive program continues to grow.  This program provides economic opportunities for my constituents and much needed revenue for the state.”

Commissioner Stewart added, “I am gratified by our continued success and I look forward to expanding our program even more in 2015.”

Captive insurance companies are owned by the entities that they insure, and are formed by businesses who wish to better manage the cost and administration of their own risk. Today Delaware is the world’s sixth largest and the country’s third largest captive domicile.  Delaware’s sophisticated corporate laws, financial infrastructure and respected judiciary make it the preeminent jurisdiction for business. These benefits are extended to captive insurance companies through Delaware’s Bureau of Captive and Financial Insurance Products.

Insurance Commissioner Stewart Announces That Delaware Captives Are On The Rise

Delaware Captive Director, Steve Kinion, stated that “This level of growth is unprecedented in the captive insurance world. Considering that when Commissioner Stewart formed the captive bureau in July 2009 there were only 38 captive insurers, we have achieved a 558% growth rate in terms of licensing captive companies, and a 1,500% growth rate in total licensing of captive entities.”

This year’s growth may catapult Delaware over Hawaii into being the third largest U.S. captive domicile in terms of active captives behind Utah and Vermont. The forecasted premium tax revenue for 2012 is $1.5 million compared to the 2011 premium tax amount which was $1,232,823. The forecasted tax revenue increase from 2011 to 2012 is 21.6%.

Commissioner Stewart is elated with the performance of the Captive Bureau. Although captive insurers will pay their 2012 premium taxes on March 1, 2013 and the exact premium revenue will not be determined until late March or early April Commissioner Stewart believes that the Delaware Department of Insurance is moving in the right direction. Stewart expressed that, “Based on the numbers we already have, I am very pleased with the success we have experienced in our captive division. I believe that we will continue to see steady growth in captives and I credit my team at the Department of Insurance for their successful efforts in making Delaware more competitive in this global arena of insurance.”

For more information on Captive Insurance please contact our Bureau of Captive & Financial Insurance Products at (302) 577-5280 or visit our website at: www.delawareinsurance.gov.