(Wilmington) The Chair of the White House Council on Environmental Quality, Nancy Sutley and David Agnew, Deputy Assistant to the President and Director of Intergovernmental Affairs visited Wilmington today to get a firsthand look at a wetlands restoration and mitigation project site that will restore 22-acres of wetlands in the Southbridge neighborhood of South Wilmington. Governor Markell, Delaware Natural Resources and

Environmental Control Secretary Collin O’Mara, Wilmington Mayor Dennis Williams, and local legislators, including Hanifa Shabazz, Wilmington City Council, 4th District, highlighted plans for the project that will reduce flooding in one of the most economically-challenged communities in the state.
The visit came on the heels of the President’s announcement last Friday of a Task Force on Climate Preparedness and Resilience that will advise the Administration on how the Federal Government can respond to the needs of communities dealing with impacts of climate change. Governor Markell was one of eight Governors appointed by President to serve on the Task Force.
In September, Governor Markell signed Executive Order 41 which requires all state agencies to incorporate measures for adapting to more extensive storms, increased flood heights and sea level rise in the siting and design of projects for construction of new structures and reconstruction of substantially damaged structures and infrastructure.

Quotes from officials during today’s visit:
Nancy Sutley, Chair of the White House Council on Environmental Quality: Climate change is changing the frequency and intensity of flooding, wildfires, storms, and heat waves and threatening our health. This project is critical to protecting this community from future floods. It’s fitting to be here in Delaware because of the leadership of the Governor, the Natural Resources Secretary and the Mayor to take action to protect communities from potentially destructive climate impacts. We can count on Delaware for innovative ideas.
David Agnew, White House Director of Intergovernmental Affairs:“The President believes we have a moral obligation to leave this planet better than we found it. Across America, states, cities and communities are innovating and making the changes they need to deal with the effects of extreme weather and other climate impacts. The Governor’s Executive Order is a great example of what states are doing. Intergovernmental cooperation is key to help ensure the federal government is doing all we can to support these efforts.”
Governor Markell: As the lowest-lying coastal state in the nation, Delaware is extremely vulnerable to climate impacts. We have a long history of challenges from erosion and flooding, which will be exacerbated by more intense storms and rising sea levels. In Southbridge, we have seen record flooding that has forced evacuations and temporary closure of some businesses. While there have been flooding challenges in Southbridge for many years, more frequent storms and heavier precipitation are making things worse. We are focused on taking strategic actions that will help transition Delaware from a position of vulnerability to one of preparedness and 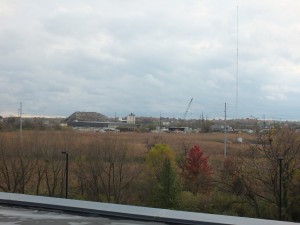 resilience.
Collin O’Mara, Secretary of the Delaware Department of Natural Resources and Environmental Control: “This is a perfect example of the type of project we need to encourage across the state and country. We are creatively working across governments to leverage existing resources to restore wetlands so they will absorb flood waters and protect this community from water damage. We will see more intense storms, greater precipitation, higher heat waves, and accelerated sea level rise that will affect communities like this one. States that prepare for climate impacts will be the most competitive in the years ahead.

The first meeting of the President’s Task Force on Climate Preparedness and Resilience will take place in December.

Photos of the event can be viewed on Flickr

(Wilmington) – Governor Jack Markell is one of eight Governors appointed today by President Obama to serve on a Task Force on Climate Preparedness and Resilience that will advise the Administration on how the Federal Government can respond to the needs of communities dealing with impacts of climate change.    The President signed an Executive Order, Preparing the United States for the Impacts of Climate Change.   Below is the Governor’s statement and the White House news release follows.

“I am honored the President has appointed me to this new task force.  Climate change is not some far off problem; it is something we are experiencing now.   For a small state like Delaware, the lowest-lying state in the nation, we are staggeringly vulnerable. We need to have frank conversations about preparing for possible impacts from storms, droughts, and sea level rise.   Recent events have crystallized the importance of this work for a lot of states.   I believe we can strengthen the economy and improve the resiliency of the environment at the same time and I look forward to serving on this new task force.”   ~ Governor Jack Markell

Office of the Press Secretary

“We’re going to need to get prepared.  And that’s why this plan will also protect critical sectors of our economy and prepare the United States for the impacts of climate change that we cannot avoid.  States and cities across the country are already taking it upon themselves to get ready… And we’ll partner with communities seeking help to prepare for droughts and floods, reduce the risk of wildfires, protect the dunes and wetlands that pull double duty as green space and as natural storm barriers.” – President Barack Obama, June 25, 2013

Today, President Obama established a Task Force on Climate Preparedness and Resilience to advise the Administration on how the Federal Government can respond to the needs of communities nationwide that are dealing with the impacts of climate change. The Task Force members include state, local and tribal leaders from across the country who will use their first-hand experiences in building climate preparedness and resilience in their communities to inform their recommendations to the Administration.

The President signed an Executive Order that directs Federal agencies to take a series of steps to make it easier for American communities to strengthen their resilience to extreme weather and prepare for other impacts of climate change.

President Obama has said that we have a moral obligation to our children and future generations to leave them a planet that is not polluted or damaged. That is why in June, the President launched a Climate Action Plan to cut carbon pollution, prepare communities for the impacts of climate change, and lead international efforts to address this global challenge. The Climate Action Plan recognizes that even as we act to curb the carbon pollution that is driving climate change, we must also improve our ability to prepare for the climate impacts we are already seeing across the country. Across America, states, cities, and communities are taking steps to protect themselves from extreme weather and other climate impacts by updating building codes, adjusting the way they manage natural resources, investing in more resilient infrastructure, and planning for rapid recovery from damages that nonetheless occur.

The Federal Government has an important role to play in supporting community-based preparedness and resilience efforts by establishing policies and prioritizing investments that promote preparedness, protecting critical infrastructure and public resources, supporting science and research needed to prepare for climate impacts, and ensuring that Federal operations and facilities continue to protect and serve citizens in a changing climate.

State, local and tribal leaders across the country are already contending with more frequent or severe heat waves, droughts, wildfires, storms and floods, and other impacts of climate change. The Task Force will provide recommendations to the President on removing barriers to resilient investments, modernizing Federal grant and loan programs to better support local efforts, and developing the information and tools they need to prepare.

An Executive Order to Protect Our Communities

The Obama Administration has taken significant steps to strengthen the climate resilience of America’s communities and economy.  More than 30 Federal agencies developed their first-ever Climate Change Adaptation Plans, outlining strategies to protect their operations, programs, and investments to better serve communities and safeguard our public resources in the face of climate change.  In the wake of Hurricane Sandy, the Administration has provided resources to rebuild the affected area to be more resilient than before, including support for more climate-resilient roads and infrastructure, and projects that protect drinking water and buffer communities from flooding.  In addition, Federal agencies have partnered with states, cities, tribes, and the private sector to develop strategies to address the impacts of climate change on our freshwater resources, oceans and coasts, and wildlife. Agencies have also built new, data-driven tools to help decision makers and resource managers map and plan for future sea level rise. From Florida to Minnesota, and from Alaska to New York, Federal agencies have partnered with communities to provide funding and technical assistance to address local climate impacts such as sea level rise, flooding, and water scarcity.

To build on this progress, the Executive Order (E.O.) “Preparing the United States for the Impacts of Climate Change,” signed today directs Federal agencies to:

To implement these actions, the E.O. establishes an interagency Council on Climate Preparedness and Resilience, chaired by the White House and composed of more than 25 agencies. To assist in achieving the goals of the E.O., these agencies are directed to consider the recommendations of the State, Local, and Tribal Leaders Task Force on Climate Preparedness and Resilience.