WILMINGTON, Del. — Congressman John Carney gave remarks today at the launch of an initiative between the federal Consumer Financial Protection Bureau, the Delaware Division of Libraries, and the Delaware Financial Literacy Institute that will improve financial literacy in Delaware. The initiative, which is being offered through the state’s public libraries, will provide Delawareans with the tools they need to make smart financial decisions on topics ranging from mortgages and credit reports to student loans and credit card debt.

Today’s announcement was followed by a training session in the Wilmington Public Library’s Inspiration Space. Librarians from throughout the state joined the presentation led by representatives from the CFPB and The Money School, either in person or via video conference.

“The ability to understand and make good financial decisions for yourself and for your family is a skill that every Delawarean should learn. In a lot of cases, it can be the difference between just getting by, and getting ahead,” said Congressman Carney. “I thank the CFPB for bringing their expertise and resources to Delaware, and Delaware libraries for helping to fill this need in our communities. Between this initiative, and the partnership already underway with The Money School, Delawareans have more help than ever before to effectively manage their money.”

“Congressman Carney and the CFPB share the goal of empowering consumers to help them make responsible financial decisions,” said Gail Hillebrand, Associate Director for Consumer Education and Engagement. “This initiative with Delaware’s Division of Libraries and local libraries will help the state’s already-trusted libraries to be community centers for financial education.”

“Delaware libraries are pleased to be collaborating with the Consumer Financial Protection Bureau to help bring additional financial literacy tools to Delawareans,” said Dr. Annie Norman, State Librarian. “Libraries are conveniently located in communities throughout the state, and are devoted to supporting individuals and communities achieve their full potential. The new set of financial empowerment tools provided by the CFPB will support libraries’ efforts to help all Delawareans achieve their versions of the Delaware Dream.”

Ronni Cohen, Executive Director of DFLI, home of The Money School added, “Delaware public libraries and the Money School have worked together for many years to ensure that every Delawarean has the information and support they need to make smart financial decisions today and into the future. We are very pleased to welcome the CFPB to this partnership, and encourage anyone looking for help to seek out their local library and the resources available.”

Over the last several months, Congressman Carney has worked closely with the CFPB, the Delaware Financial Literacy Institute, and the Delaware Division of Libraries to bring this initiative to Delaware. As a member of the House Financial Services Committee, Congressman Carney has strongly supported the Consumer Financial Protection Bureau in its mission of ensuring that consumer finance markets are fair and consistent, and that consumers have the knowledge and ability to make smarter financial decisions. 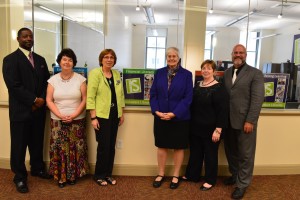 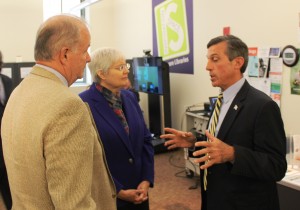 Congressman Carney (right) talks with Gail Hillebrand, Associate Director for Consumer Education and Engagement at the Consumer Financial Protection Bureau and Rod Scott, president of the Board of Managers for the Wilmington Institute Library before today’s announcement.

Congressman John Carney speaks with librarians from throughout the state at today’s launch a new financial literacy initiative between Delaware libraries and the Consumer Financial Protection Bureau.

NRG worked for a year to convert the coal-fueled plant to a much cleaner, more efficient combined-cycle natural gas facility. To assist with the costs of repowering the facility, NRG received a grant from the Delaware Energy Efficiency Investment Fund, which helps local businesses make strategic capital equipment investments that reduce operating costs and support job creation, while reducing energy consumption and improving environmental performance.

“The repowering of NRG Energy Center Dover represents another important milestone in Delaware’s efforts to have the cleanest, cheapest and most reliable energy in the nation,” said Governor Markell. “NRG’s investment in cleaner natural gas technology provides significant air quality benefits for our citizens and improves the economic competitiveness of Kent County. NRG is to be recognized for reducing air emissions and contributing to Delaware’s goal of a clean energy economy.”

“Today’s air quality and energy efficiency improvement announcement at NRG’s Energy Center Dover is welcome news for Delaware,” said Senator Carper. “We do not have to choose between having a cleaner, stronger environment and having a robust, growing economy. It is possible to have both, and protect public health and jumpstart new industries in the process.”

“Converting our power generation to cleaner, more efficient sources is the best way to help our nation lower energy costs, reduce harmful emissions, and increase our energy independence,” Senator Coons said. “NRG Energy Center Dover is an excellent example of the advancements possible when the government and private sector work together to modernize our energy production. Residents of Central Delaware will immediately enjoy the benefits of NRG’s efforts to improve air quality and efficiency, and I am hopeful that this type of investment will be replicated by more energy companies nationwide.”

“This project marks another important step in Delaware’s transition to a cleaner energy economy,” said Congressman Carney. “NRG’s investment in its Dover facility will allow businesses in Delaware to take advantage of lower cost energy to expand, create jobs and compete in a global marketplace.  The project will also lead to significant, long-term improvements in Delaware’s air quality. I applaud NRG for making this commitment in our state and encourage other facilities in the area to make similar changes.”

“Today is a big day for Kent County,” said Secretary O’Mara. “NRG deserves recognition for investing in significant upgrades that will help reduce energy bills, while significantly reducing air emissions and contributing to the State’s goal of improving the health of all Delawareans.”

NRG Energy Center Dover, a wholly owned subsidiary of NRG Thermal LLC, is a combined heat and power facility. Prior to the repowering project, the plant featured one co-generation, coal-fueled 16 Megawatts (MW) steam turbine and two, simple-cycle 44 MW natural-gas combustion turbines. Its electricity was transmitted to the PJM market, part of the Eastern interconnection grid operating an electric transmission system serving Delaware and 12 other states as well as the District of Columbia.  The steam was sold to local manufacturers Kraft Foods and Proctor and Gamble for their process and space conditioning needs.

NRG took an innovative approach to repowering the facility by taking one of the existing gas turbines and adding a heat recovery steam generator and reusing the existing 16MW steam turbine to create a combined cycle power plant. The existing coal equipment was then permanently retired. The improvements created 75 construction jobs over the course of the year.

The combined cycle unit utilizes two types of turbines – a gas turbine and an adjacent steam turbine. First, natural gas is ignited in a combustion chamber, creating heated gas that exhausts into a turbine, turning its blades. The turbine is connected by a shaft to a generator, producing electricity. This is the first cycle. Hot exhaust gases leaving the turbine are then passed through a heat recovery steam generator. The steam is piped into a steam turbine, turning another set of blades that is connected to a separate generator, making additional electricity. This is the second cycle.  Some of the steam is used for heating, which is referred to as “co-generation.”

After DNREC’s Division of Air Quality issued the facility’s new operating permit, commercial operations began in June with a combined-cycle package of 62 MW and a combustion turbine peaker unit of 44 MW. The plant will continue to serve the PJM market and co-generate steam for Kraft and Proctor and Gamble. The combined cycle unit preserved 16 MW of energy generation from obsolescence and improved fuel efficiency by 30 percent per unit of energy delivered.

The conversion reduces annual air emissions by more than 4 million pounds of sulfur dioxide (SO2), 800,000 pounds of nitrogen oxides (NOx) and 120,000 pounds of particulate matter. This results in reductions of 99 percent of SO2 and 92 percent of NOx emissions – two air pollutants that can cause serious respiratory conditions – and more than 65 percent of the stack particulate emissions. In addition, 117,000 pounds of hydrochloric and sulfuric acid, 14 million pounds of fly ash and bottom ash, and virtually all mercury and lead emissions produced from coal combustion have been eliminated  These improvements will remove the NRG Energy Center Dover from Delaware’s Toxics Release Inventory (TRI) report entirely.

According to Lee Davis, President of NRG’s East Region, “We’re pleased to welcome Governor Markell, Senators Carper and Coons, Representative Carney and Secretary O’Mara here to inaugurate our repowered Dover Thermal plant. Along with significant environmental investments at our Indian River Generating Station, this project demonstrates NRG’s commitment to the State of Delaware and to operate our generation assets as cleanly and efficiently as possible.”

Several years ago NRG began an air quality improvement program at the Indian River Generating Station, which has resulted in significant emissions reductions at the plant. First, NRG closed down two coal units, one in 2010 and another in 2011. The company invested $360 million in environmental controls on unit 4, in addition to previous investments of approximately $50 million in controls on both units 3 and 4. Lastly, the company will shut down unit 3 at the end of 2013.  Taken all together, these steps will make Indian River Generating Station one of the cleanest coal plants in the country.