BEAR – The staff of the Delaware Veterans Memorial Cemetery in Bear were recognized Tuesday by the U.S. Department of Veterans Affairs for their outstanding service to the state’s veterans and their families.

Gov. John Carney joined the Bear team and the Delaware Commission of Veterans Affairs in accepting the Operational Excellence Award from Under Secretary for Memorial Affairs Randy Reeves of the VA’s National Cemetery Administration. The award places the Delaware Veterans Memorial Cemetery among the top five percent of state veterans’ cemeteries in the nation. 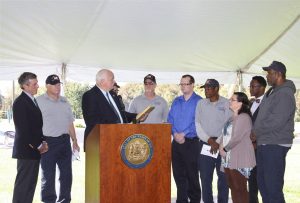 “The Delaware Veterans Memorial Cemetery truly is hallowed ground for those Delawareans who served their country in our armed forces, and for the loved ones who carry on the legacy of their deeds,” said Governor Carney. “I’ve always been extremely proud of the dedicated team that works every day to ensure that this resting place is maintained to the highest standards of excellence, and I congratulate them on earning the recognition they deserve.”

The VA established the Operational Excellence Award program for state and tribal cemeteries in May, 2018 to recognize outstanding service to veterans and their family members in all areas of operations. The Bear cemetery met or exceeded 82 of 90 applicable performance measures for a combined score of 91 percent in the areas of Interment Operations, Grounds Maintenance, and Headstone, Marker, and Niche Cover Operations.

“Cemeteries like the Delaware Veterans Memorial Cemetery in Bear are a model of excellence, on par with some of the best national cemeteries in the country,” said Under Secretary Reeves. “The dedication to maintaining this cemetery as a shrine truly commemorates veterans’ service and sacrifice to our nation.”

In 2016, the VA awarded a $3.67 million expansion grant for the Bear cemetery, which provides a final resting place for 45,000 Delaware veterans and their eligible family members. The Delaware Veterans Memorial Cemetery is administered by the Delaware Commission of Veterans Affairs.

“The whole team at the Delaware Veterans Memorial Cemetery in Bear does outstanding work to honor the memory of our state’s veterans, and to support their families in their times of mourning,” said Larence Kirby, executive director of the Delaware Commission of Veterans Affairs. “Our mission is support those who served, and I can’t think of a better group of individuals who embody that goal.” 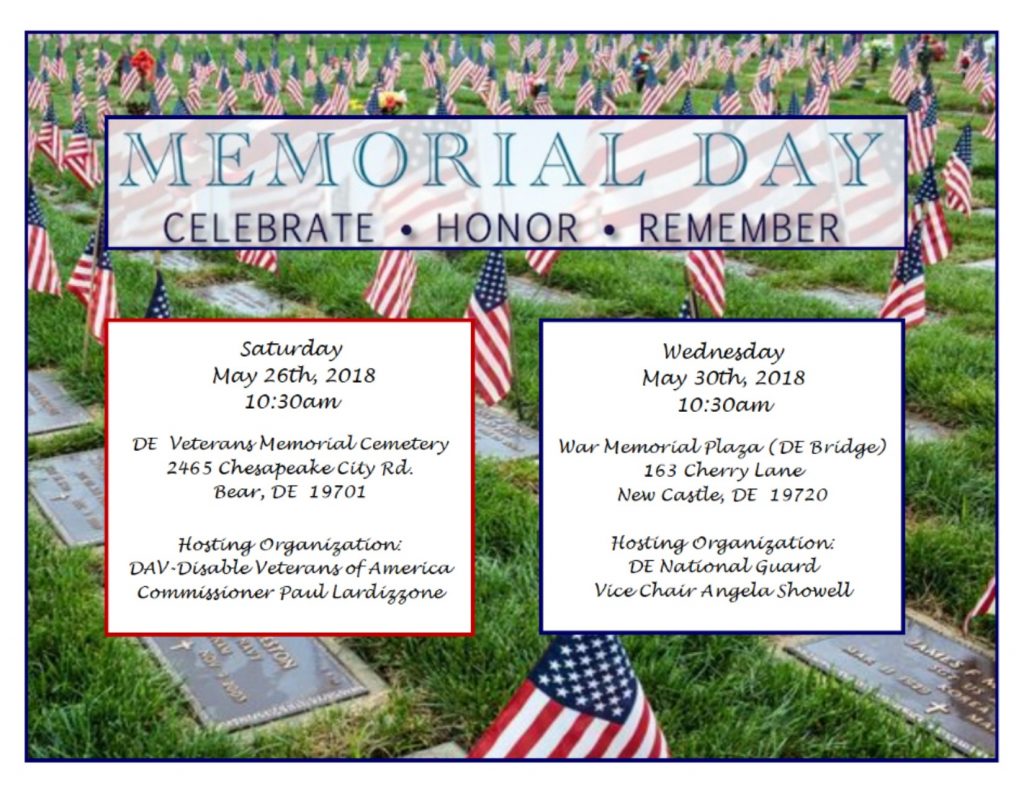 The Delaware General Assembly welcomes Wreaths Across America to the First State for the 4th annual ceremony in Dover. “Delaware is proud to participate in the Wreaths Across America Program at our capital in Dover. The mission of the program is to remember, honor and teach, by laying wreaths on Monday, December 11, 2017, at the capitals in all 50 states, as well as at Arlington National Cemetery and all other veterans cemeteries, ” Senator Bruce C. Ennis, Chair, Senate Veterans Affairs Committee.

HONOR those who serve.

TEACH your children the value of freedom.

The Delaware Commission of Veterans Affairs and the Disabled American Veterans are hosting this year’s Veterans Day Service. Please join us to pay tribute to all who have served and to all who are currently serving. (For more information, please contact the DCVA office at 302-739-2792)

What is a Veteran? A “VETERAN” -whether active duty, discharged, retired, reserve or guard- is someone who, at one point in his/her life, wrote a blank check made payable to “The United States of America,” for an amount of “up to, and including his/her life.”

It is a VETERAN, not the preacher, who has given us freedom of religion.

It is a VETERAN, not the reporter, who has given us freedom of the press.

It is a VETERAN, not a poet, who has given us freedom of speech.

It is a VETERAN, not the campus organizer, who has given us freedom to assemble.

It is a VETERAN, not the lawyer, who has given us the right to a fair trial.

It is a VETERAN, not the politician, who has given us the right to vote.

eterans Day Parade through downtown Dover that kicks off at 9:30am. Parking is available all around Legislative Hall, which sits on Legislative Avenue between Martin Luther King Jr. Blvd. North and South. Refreshments will follow the ceremony at the Delaware Public Archives adjacent to Legislative Hall. (For further information, please call (302) 744-4114 or email: Legislative.Council@delaware.gov)