Delaware joined the national effort to house homeless veterans in 2015

“Our veterans served because of a heartfelt duty to country. We owe them a similar sacred duty, and Delaware has stepped up and achieved something truly remarkable,” said Governor Carney. “Good, safe, stable housing is vital to so much in our lives, and the work of our partners and supporters helping finding homes for more veterans has made a real difference.”

In 2015, Delaware joined the national Mayors Challenge to End Veteran Homelessness, committing the state, leaders of all three counties, and the mayors of eight towns and cities to the initiative. So far, it is one of three states and 47 counties or cities to have achieved an effective end to veteran homelessness. The Delaware State Housing Authority has led those efforts through a statewide working group to coordinate resources on behalf of veterans.

The milestone announced on Thursday demonstrates that the state’s commitment to veterans remains strong even after Delaware effectively ended veteran homelessness last fall. The United States Interagency Council on Homelessness, the U.S. Department of Housing and Urban Development and the U.S. Department of Veterans Affairs certified in October that Delaware has a sustainable and systematic response in place to ensure that homelessness among veterans is prevented whenever possible.

“This was a true partnership and involved real teamwork to help ensure that we care for all our veterans,” said DSHA Director Anas Ben Addi. “We understand that while the work will continue, today’s milestone is a huge accomplishment in that mission and toward that goal.”

Through those efforts, the state developed a process to share data; increased targeting of resources to homeless veterans with the greatest need; and improved connections between resource providers. DSHA and the Delaware Department of Health and Social Services also set aside state-funded rental assistance vouchers for homeless veterans who did not qualify for federal assistance.

About 300 of the housed veterans were in New Castle County, with about 100 in Kent and Sussex counties each.

“It means a whole lot. Words can’t express it,” said U.S. Marine Corps veteran Gregory Larry of Wilmington, who moved into an apartment at the Summit at Middleboro Crest in February after experiencing homelessness, working through the VA and Connections CSP. “I was grateful that I had the chance to meet the people that I met, because it has really helped me a lot. Living in the streets isn’t a joke.”

“Every member of our community deserves a safe and affordable place to live,” said New Castle County Executive Matthew Meyer. “Stable and permanent housing provides the foundation on which to build a better life, and I am proud of our private-sector landlords, non-profit partners, and public housing agencies who together found a way to meet this milestone.  By doing so, and especially by continuing this work, we honor the service and sacrifice of our neighbors who have given so much for us.”

“Delawareans have joined forces to transform words into deeds to help establish a brighter future for our veterans,” said Bill Farley, chairman of the Delaware Commission of Veterans Affairs. “This milestone is a tremendous accomplishment, and highlights the many ways veterans’ lives are improved when they have stable and secure housing.”

DOVER – The Delaware Commission of Veterans Affairs welcomes veterans, their families and the public at large to join in two Memorial Day observances scheduled for the holiday weekend.

As in previous years, the Commission will host ceremonies on separate days at the Delaware Veterans Memorial Cemetery in Bear and at the foot of the Delaware Memorial Bridge, honoring those who lost their lives in the service of their nation.

Delaware Veterans Trust Fund – Signed into law by Gov. Jack Markell in September 2013, the Delaware  Veterans Trust Fund, under the auspices of the Delaware Commission of Veterans Affairs, assists Delaware’s honorably-discharged veterans of all generations who find themselves in emergency financial need. It has been used for many purposes, including stopping evictions, prevention repossession of vehicles needed for work, emergency housing repairs and sometimes food vouchers. All applications for assistance are screened by a committee and if approved, bills are paid directly to the vendor.

One hundred percent of contributions to the Trust Fund are tax deductible and because the facilities of the Commission of Veterans Affairs are used to support the effort; similarly, one hundred percent of contributions are returned to veterans without deduction for overhead, salaries or any other purposes. To assist in this work, the Friends of Delaware Veterans, a 501 (c) 3 entity, was created in 2014. The Friends purpose is to help get the word out and raise funds for the Veterans Trust Fund. The Friends board are volunteer community leaders from across the state who works with the Commission. The Friends create events like the annual dinners featured on this post and other Friend and fundraising activities.

The Friends would be please to address your private or community organization about our work. You may contact us by calling the DE Commission of Veterans Affairs at (302) 257-3117 or email Mrs. Sherri Taylor at sherri.taylor@delaware.gov to make a connection.

The Veterans Trust Fund not only assists veterans in paying emergency bills, but also follows through by connecting them with other services, including financial and other types of counseling as needed, as well as to outreach organizations that can provide furniture and household items for those in transition.

Please join us for a black tie optional affair to help benefit veterans of this great state of Delaware. There’s two dates and location to join this great cause.

Dinner tickets are $100 and include a plated chicken or steak dinner, entertainment and guest speaker. Earn program credit for 8-person sponsor tables at $1,000.

Tickets may be ordered by mailing a check made to Friends of Delaware Veterans, 802 Silver Lake Blvd., Suite 100, Dover, DE 19904. Please make sure you indicate Nov. 6th or 14th to include dinner choice in the memo area.

Please RSVP by Nov. 2nd. No tickets will be sold at the door. Tickets will be held at the Will Call table at each event. Sponsorships are available. The deadline for sponsorships is Oct. 24th. Email Sherri.taylor@delaware.gov or call 302-257-3117.

Let’s start the 4th of July celebration with helping those who have served our beautiful country! Start the morning with a great work-out and have no guilt trips when you enjoy your cookouts!

The FREEDOM 5K Run/Walk/Roll will be held on Saturday, July 4, 2015, 9:00 AM, at the Kent County Memorial Park (near Kent County Administration building & Blue Hen Mall (rain or shine). Registration starts at 8:00 AM. You can also register online @ www.trisportsevents.com. All participants will receive a quality “Freedom 5K” tee shirt. Post-race festivities include free food and beverage. All proceeds will benefit the Delaware Veterans Trust Fund that provides assistance to Delaware’s veterans in financial crisis. Can’t make the race, but would still like to support this event! Register as a Silent Hero! Thank you all for your support!

All net proceeds received from this effort will support DVH in providing additional amenities and homelike comforts for the more than 130 residents. The Delaware Veterans Home, located in Milford, opened to residents in 2007, and has served more than 400 residents since that time.

The first 200 memorial bricks purchased will be placed in the flag plaza at the front of the home, with additional bricks being added in other locations around the property. 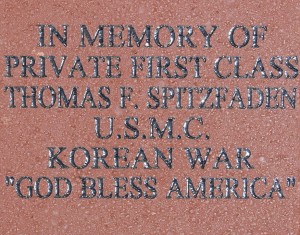