Legislative Session Postponed Until Further Notice Due to Coronavirus Pandemic

Legislative session originally was scheduled to resume on Tuesday, but was postponed last week due to the spread of COVID-19 and recommendations from the Centers for Disease Control, the World Health Organization and Delaware public health officials.

As the situation has continued to unfold, it has become necessary to postpone session for the foreseeable future as officials assess the extent of Delaware’s exposure to the virus. While it is possible that session could resume normal operations at some point in the future, there is no firm date at this time. Legislative leaders will continue to examine the situation with input from public health experts and executive branch agencies to determine the best path forward.

Rep. Schwartzkopf and Sen. McBride noted that the General Assembly is preparing plans that will be used in the event lawmakers must reconvene to pass legislation that addresses the effects of the Coronavirus on Delawareans and state government.

Additionally, the General Assembly is constitutionally required to pass an operating budget by June 30, and plans are being discussed to meet that obligation should this State of Emergency stretch well into the spring.

Legislative Hall remains closed to the public, with no tours or in-person meetings taking place.

DOVER – The Delaware General Assembly, the Delaware Commission of Veterans Affairs and the Delaware Heritage Commission will unveil a new monument this weekend honoring Delawareans who served in World War I and those who supported them on the home front. The monument will be installed on the grounds of Legislative Hall and dedicated with a special ceremony at noon on Saturday, Nov. 4. 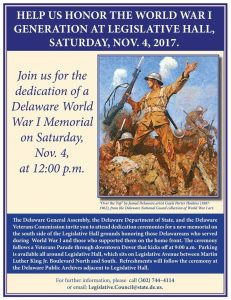 Throughout the United States’ engagement in World War I, some 9,000 Delawareans served overseas in the U.S. Army, Navy and Marine Corps. Of that number, 43 Delawareans were killed in action and 188 were wounded. Many more succumbed to the great influenza epidemic of 1918-1919, bringing the total number of Delaware service personnel lost during the war to 270.

The parade will begin at the west end of Loockerman St. and progress through downtown Dover to Legislative Mall.
The monument dedication will take place on the grounds of Legislative Hall, near the corner of Legislative Ave. and Martin Luther King Jr. Blvd. South.

The Delaware General Assembly will host a Wreaths Across America ceremony on Monday, Dec. 7, 2015 at 11:30 a.m. and the public is invited. State House ceremonies in all 50 states and Washington D.C., are part of a week-long celebration of America’s veterans and their service to our country, with a particular focus on family during the holidays.

“The simple act of laying these wreaths will honor their legacies and serve as a visible reminder of their sacrifices,” said State Representative Earl Jaques, Chairman of the House Veterans Affairs Committee. Delaware Senator Bruce C. Ennis, Chairman of the Senate Veterans Affairs Committee, agreed. “Delaware is proud to participate in the Wreaths Across America Program at its capital in Dover. The mission is to remember, honor and teach, by laying wreaths at the capitals in all 50 states, as well as at Arlington and all veterans cemeteries.”