• Delaware’s Office of State Planning Coordination will administer the application process.
• Applications from local governments interested in being designated as a Downtown Development District are due to the OSPC on or before June 1, 2016.
• Application materials are available at stateplanning.delaware.gov.
• To date, $9.7 million in program grants is leveraging more than $160 million in private investment in downtown districts in Dover, Seaford and Wilmington

Residential, commercial and industrial development in designated districts may qualify for a menu of local and state incentives, including grant rebates to offset the cost of private investment.

Governor Markell made the announcement Wednesday morning in Wilmington at the 2016 Downtown Delaware “Revitalize!” Conference.

“Delaware’s downtowns are drivers of economic growth and prosperity, and this program has proven that a small amount of state support can catalyze major private investment to energize these key areas,” said Governor Markell. “We look forward to building on the program’s success, and supporting more investment.”

The DDD program, initially proposed by the Governor in his 2014 State of the State address, was created by legislation passed unanimously by the General Assembly that spring.

In January 2015, Governor Markell selected areas of Dover, Seaford and Wilmington as Delaware’s first Downtown Development Districts. Wednesday’s announcement will allow cities to once again apply for the designation.

So far, $9.7 million in grant funding is leveraging more than $160 million of private investment in the current districts.

Projects include a 355-space public parking garage at 9th and Shipley Streets, which will make it easier for Delawareans to drive downtown, watch a concert, or have dinner at one of Wilmington’s restaurants. Above the garage, more than 200 apartments are planned with 12,000 square feet in ground-floor retail space.

Central Delaware Habitat for Humanity is building homes on vacant lots on New Street and Kirkwood Street in downtown Dover, investments that are helping revitalize the community through homeownership.

In Seaford, grants are helping support the construction of quality apartment buildings on the Nanticoke River, with boat docks outside. The apartments will help attract more people to live and work in Seaford, a city that is critically important to the economy in western Sussex County.

“We know the DDD program is working to encourage investment in Delaware’s downtowns,” said Anas Ben Addi, Director of the Delaware State Housing Authority. “As we expand the program, we expect even more progress statewide.”

Dover Mayor Robin Christiansen said the designation of downtown Dover as a Downtown Development District is helping the city revitalize its neighborhoods.

“The Downtown Development Districts program has helped people to realize the investment opportunities we have in downtown Dover,” said Mayor Christiansen. “We are currently in the early stages, but this will ultimately make a significant improvement to downtown in both business and residential neighborhoods.”

“I am extremely enthusiastic about this program,” said Constance Holland, State Planning Director at the Office of State Planning Coordination. “I sincerely believe that the Downtown Development District program is the backbone for the revitalization of downtowns throughout Delaware.”

The OSPC and its planners will serve as a resource for any government interested in applying to become a designated Downtown Development District. OSPC planners can provide information about the application form, data from the Census, assistance with mapping, or general advice about the program.

Local governments are encouraged to contact the OSPC early in the process of preparing an application to ensure that a complete application is submitted by June 1.

“The fact that the Governor and legislators recognize how important historic downtowns are to the people of Delaware gives local governments a lot of encouragement,” said Sam Cooper, Mayor of Rehoboth Beach and president of the Delaware League of Local Governments. “This state funding leverages significant private funds to make things happen in our downtowns. Bringing activity back downtown increases vitality, creates jobs and builds community pride – strengthening a whole community.”

Governor Jack Markell to Announce the Delaware Challenge to End Veteran Homelessness: May 4, 2015

Governor Jack Markell to Announce the Delaware Challenge to End Veteran Homelessness in 2015.

At 10:00 AM on Monday, May 4th, at American Legion Post 2, Dover, DE, Governor Markell will gather state and local leaders together to announce the Delaware Challenge to End Veteran Homelessness in 2015. This is one of the goals the Governor included in his State of the State Address on January 21, 2015.

The Challenge to End Veteran Homelessness is an initiative begun at the suggestion of First Lady Michelle Obama and Second Lady Jill Biden and organized under the auspices of the United States Interagency Council on Homelessness (USICH). USICH, in cooperation with the Department of Housing and Urban Development (HUD) and the Department of Veterans Affairs (VA), developed the Mayors Challenge to End Veteran Homelessness in 2015, challenging mayors and community leaders throughout the nation to create new local initiatives to reach the goal of ending veteran homelessness in their communities. Since then, local initiatives have become active across the nation.

In October, 2015, Mayor Christiansen of Dover officially accepted the Mayors Challenge to End Veteran Homelessness and he formed a working group of local volunteers to begin working toward the goals of outreach to identify homeless veterans; prevention of homelessness by promoting stable housing solution; and diverting veterans from temporary shelters to alternative housing arrangements and supportive services leading to permanent solutions. Mayor Christiansen asked the Vice Chairman of the Delaware Commission of Veterans Affairs to lead the efforts of the working group. In collaboration with HUD, VA, Delaware State Housing Authority, Dover City Planner, Dover Housing Authority, Kent County Levy Court and a host of other federal, state and local agencies as well as local private shelters, veteran service organization, businesses and interested individuals, the Dover Working Group brought together volunteers for a training program based upon strategies being successfully employed in various locations throughout the country. Through that effort the volunteers organized the Dover Veterans Welcome Home Team with the specific goals designed to end veteran homelessness in Dover in 2015. The team meets regularly to review the status of cases for veterans they are assisting.

From this initiative, the Delaware Commission of Veterans Affairs and the Delaware State Housing Authority in conjunction with the Delaware Joining Forces Coalition have developed the Delaware Challenge to End Veteran Homelessness in 2015 and to assist local communities throughout the state to create their own local goals and initiatives to end veteran homelessness.

On May 4th, Governor Markell will officially challenge state and local leaders to join the effort to end veteran homelessness in 2015.

August 7, 2014 – (Woodside, DE) – On July 30, 2014, Delaware State Housing Authority (DSHA) honored students in the DSHA housing community for achieving academic excellence by making the honor roll and having perfect attendance, with a luncheon and awards ceremony at Polytech High School in Woodside, Delaware.

First Lady Carla Markell made remarks, praising the hard work and achievement of the students. This year saw our largest class in the history of the program, with 73 students receiving awards, including one Special Recognition for a President’s Award winner and a student continuing his job skills training.

Mrs. Markell congratulated the children and families, “Today is a celebration and we are recognizing your efforts to stay in school and get good grades.  Education is the key to success, so work hard and always do your best.  Remember – there are people in your lives who will always be here to support and encourage you.”

The annual luncheon has been a tradition at DSHA for more than 20 years and serves as a way to recognize the children’s successes and highlight the importance of a support system. While children may still be in the summer vacation state of mind, DSHA rewarded their hard work by giving them a head start on back-to-school shopping with necessary, age-appropriate school supplies as well as some other high-quality items including brand new L.L. Bean backpacks. 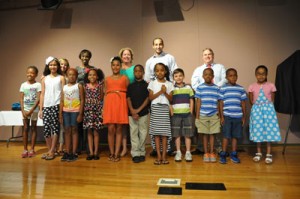 First Lady Carla Markell and DSHA Director Anas Ben Addi
with a few of the students recognized at the award ceremony.

“We wanted to honor hard work, responsibility, education and family support by providing a gift for everyone in the family,” said Anas Ben Addi, DSHA Director. “Family support helps students succeed, and we felt that this was an excellent way to help support parents and recognize the children for all that they do together.”

Brooke Giordano, going into 8th grade, received an award from President Obama for Outstanding Academic Achievement. She is a student at Central Middle School and she is a repeat winner of the Honor Roll award.

Founded in 1983, the President’s Education Awards Program (PEAP) honors graduating elementary, middle and high school students for their achievement and hard work. The program has provided individual recognition from the President and the U.S. Secretary of Education to those students whose outstanding efforts have enabled them to meet challenging standards of excellence. Each year, thousands of elementary, middle, and high schools participate by recognizing deserving students.
Another special recognition went to Ronnie Woodus, Jr., who graduated from the Charleton School this year.  Ronnie will be going on to continue his education in job skills until age 21.

As part of the National Association of Housing and Redevelopment Official’s (NAHRO) Housing America Campaign, a poster contest is held each year for children residing in affordable housing sites.  This year’s theme was “What Home Means to Me.”  Delaware’s 1st place winner was Quneek Monay-Yvette Wilson, a 5th grade student from Dover. 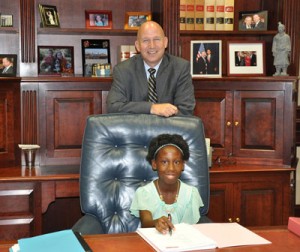 Governor Markell and Quneek in the Governor’s Office

The poster was framed and presented to Mrs. Markell at the luncheon. Governor Jack Markell was on hand Wednesday for the official ceremony to hang the poster in the Governor’s Office.
The Governor said, “We are honored that Quneek chose to gift the poster to the people of Delaware. It looks beautiful on the wall, and serves as an important reminder to all of us that safe, stable housing is an integral part of our efforts to strengthen and improve the opportunities for our future generation.”

The Delaware State Housing Authority (DSHA), formed in 1968, is dedicated to providing quality, affordable housing opportunities and appropriate supportive services to low- and moderate-income Delawareans. In addition to its role as the State’s Housing Finance Agency, DSHA is unique in that it is also serves as a Public Housing Authority and acts as a Community Development and Planning Agency. As a Public Housing Authority, DSHA receives funding from HUD to build, own and operate public housing in Kent and Sussex counties, two of Delaware’s three counties. For more information about the Delaware State Housing Authority, please call: (302) 739-4263 or visit our website at: www.destatehousing.com