Wilmington, DE – Downtown revitalization efforts in Seaford, Dover and Wilmington will soon get a boost, as Governor Jack Markell today announced the recipients of the Delaware’s inaugural round of Downtown Development District (DDD) Grants. A total of 13 projects in DDDs statewide have been selected to receive $5.6 million in funding.  The state’s $5.6 million is expected to leverage more than $114 million in private investment in a variety of new development projects.

“The Downtown Development Districts program was designed to leverage private money to spur development in Delaware’s downtowns and I am pleased to see those efforts are starting to bear fruit in a big way,” said Governor Markell. “The grants announced today will help fund the development of a variety of projects, ranging from an affordable senior housing facility to a 200-unit apartment building to a marina. Most importantly, using less than $6 million in state money, the DDD Grants will leverage more than $100 million in private investment when these projects are completed. Such investments in our downtowns are key to boosting the economy.” 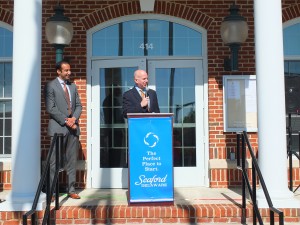 The DDD program was created by legislation proposed by the Governor and passed unanimously by the General Assembly last year. In January, Governor Markell designated the downtown areas of Seaford, Dover, and Wilmington as Delaware’s first three Downtown Development Districts.

To incentivize development in these areas, applicants receiving DDD Grants will receive up to 20 percent of their construction costs in the form of a rebate. To minimize the risk to state money, DDD Grants may only be awarded when projects are completed. The grants will be administered by the Delaware State Housing Authority (DSHA).

As part of the program, additional State and local incentives were made available to businesses and district investors who invest within the Downtown Development District boundaries.

“Sixteen applications were received requesting nearly $8M in funding,” added DSHA Director Anas Ben Addi.  “While we were unable to fund them all in this round, it is very encouraging to see that there is such a large interest and we look forward to working with all our partners to continue our work revitalizing downtown areas.”

“Being able to participate in the DDD grant process has enabled our organization to push forward with our project and help jumpstart the transformation of the City of Seaford’s downtown business district,” said David Perlmutter, Managing Member of the Residences at River Place, which will be located in Seaford. 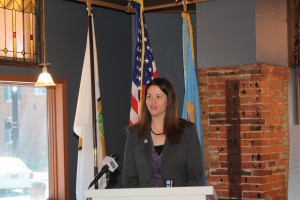 “We are so thankful that residential development was included in the DDD program. This rebate will allow Central Delaware Habitat for Humanity to continue our work in downtown Dover as we reinvest it in additional homes which allow us to transform lives and neighborhoods,” said Jocelyn Tice, Executive Director of CDHFH.

“I am very much appreciative to have received the Downtown Development District Grant,” said Joseph Petrosky of G & J Holdings LLC, another successful Dover applicant. “The grant will enable us to finance the improvements necessary to prepare our property for future tenants, adding jobs and foot traffic to the downtown area. I am hopeful this renovation will lead the way for future investment in downtown Dover.”

“This is terrific news,” said Brother Ronald Giannone, executive director of Ministry of Caring, Inc., one of ten successful applications in the City of Wilmington. “Former Mayor Jim Baker, who is one of Ministry of Caring’s board members and a long-time resident of the city, was shocked to know that Sacred Heart Village II project, which is being built on the East Side, hit so much granite that it has taken close to five months to remove, at an expense that has reached over $400,000. Sadly the meter is still ticking, and hopefully will soon come to an end. This award from DSHA will cover an expense that was impossible to anticipate.  We are most grateful to DSHA, not only for this grant, but for their commitment to building quality and affordable housing for seniors.  Governor Markell and DSHA should be commended for making quality housing a priority in the State of Delaware, especially for the poor and marginalized seniors.”

Stakeholders encouraged to provide feedback before document is finalized

The draft application is available on a new Downtown Development Districts website administered by the Office of State Planning Coordination (OSPC). The website also includes a draft companion booklet that further explains the application process. The draft application and booklet include information such as the proposed maximum size of Districts; required demographic information to be provided by applicants; and explanations regarding the content of District Plans.

Stakeholders are encouraged to review the draft application and booklet, and to submit their comments and questions to OSPC by July 25, 2014 for consideration in a final application to be published by the end of the month. OSPC will administer the application process, establish criteria to determine what areas qualify as DDDs, and provide technical assistance to cities, towns, and unincorporated areas.

“The DDD program has tremendous potential to strengthen neighborhoods, to spur private investment in our downtowns, and to improve housing for persons of all incomes and backgrounds,” said Governor Markell. “To realize that potential, it is important that cities, towns, and other stakeholders lend their insight and expertise as the program takes shape. I commend the Office of State Planning Coordination for giving stakeholders the opportunity to ‘weigh in’ on the application, and I encourage all interested parties to provide their comments to OSPC by July 25.”

Created by Senate Bill 191 and funded in the FY 2015 Bond Bill at $7 million, the initiative provides economic development incentives that promote revitalization of downtown areas and surrounding neighborhoods selected through the application process.

The timeline for the designation of DDDs, including the deadline for cities, towns, and unincorporated areas to apply for District designation, will be announced when the application is finalized.

Localities will be able to apply to have a portion of their city, town, or unincorporated area designated as a Downtown Development District (DDD).  Applications will be evaluated using three main criteria: (1) need; (2) the quality of the development plan submitted by the applicant; and (3) local incentives offered. The Governor will select at least one but no more than three Districts this year. Under the program, the first three Districts must include one District in each county.

Following designation, investors in the selected Districts will be entitled to grants of up 20 percent of their construction costs. Grants will be available for all types of projects (residential, commercial, and mixed-use), and may be used by for-profit builders and investors, nonprofit organizations, businesses, and homeowners. The grants will be administered by the Delaware State Housing Authority (DSHA).