Dover, DE – Education Secretary Mark Murphy announced today that he will end his tenure in the coming months to pursue other opportunities, concluding a term marked by record-high graduation rates, more students enrolling in college, and better opportunities than ever for Delaware students to successfully prepare for the workplace.

Governor Markell will nominate Dr. Steven Godowsky, a long-time Delaware administrator and former superintendent of the New Castle County Vo-Tech School District, to succeed Murphy and continue the Department’s work to support progress made by students and educators throughout the state. Murphy remains in discussions about his next position, but he and the Governor agreed that it would be beneficial to announce the upcoming change, as well as the nomination of a new Secretary, prior to the start of the coming school year.

Markell will submit his nomination to the State Senate for consideration during a special session on October 28, but Godowsky will assume an interim role before that time, after Secretary Murphy officially steps down this fall, on a date still to be determined.

“The work to prepare all of our students for college, career, and life in today’s changing world is incredibly rewarding, but it’s also not easy,” said Markell. “Mark has addressed every challenge with a remarkable determination to support the hard work happening in our schools and find solutions that best serve our youth. We have made tremendous strides in the past few years, while laying the groundwork for more progress in our never-ending mission to ensure every Delaware child receives the best possible education. I am thankful for Mark’s service to our state.”

During Secretary Murphy’s tenure, the accomplishments of Delaware students and schools include:

Murphy also oversaw the implementation of higher standards in Delaware’s classrooms, working with teachers and administrators to put in place the Common Core and Next Generation Science Standards, both designed to ensure that students are on track to learn the skills most valued in colleges and the workplace in an era when good jobs demand a higher level of education and training than ever.

The state’s voluntary Common Ground program supported educators in the transition, with teachers working on new techniques and strategies to help students meet higher expectations and hundreds of them coming together to demonstrate lessons. In addition, Delaware’s leading science teachers revised their lessons and teaching styles to give their students more opportunities to work like scientists and create models accessible to teachers across the state.

“I’m grateful to Governor Markell for this opportunity to serve the children of our state,” said Murphy. “We should all applaud the efforts of our educators as they improve the lives of our young people each and every day.  In many schools, we see students making incredible strides forward. To achieve the promise of great educational opportunities for all children in the coming years, continued courage and leadership will be needed by all.”

Since joining the Department of Education in 2012, Murphy has led the state in improving educator preparation programs to better ensure new teachers have the skills and experience to succeed from their first day on the job, and he has overseen the strengthening of the state’s charter school law to improve school accountability and support.

His time in office has also coincided with critical steps in implementing the state’s Race to the Top plan, which won federal funding to improve Delaware schools. Key parts of that work will continue to be funded by the state as federal funding ends. Through those efforts, Delaware has:

While maintaining and improving upon the state’s progress, the new Secretary will have the opportunity to shepherd initiatives that have gained momentum over the past year. The Administration continues to press for changes to the state’s teacher compensation system in line with recommendations supported by legislation passed in June. In addition, last week, Governor Markell signed laws that allows for the redrawing of district boundaries in Wilmington as part of an effort to transform educational opportunities in the city, particularly for our most at-risk children.

In choosing his nominee to help lead these efforts, the Governor praised Godowsky’s career-long commitment to strengthening educational opportunities for Delaware children.

“During his forty plus years of work in Delaware’s schools, Steve has established himself as a respected leader with the ability to work productively with teachers, administrators, and, most importantly, our students to get the most out of their schools,” said Markell. “We have more work to do and, with the Senate’s confirmation, I am confident that he will help everyone in our system build on our progress.”

Godowsky led the New Castle County Vo-Tech District for eight years beginning in 2003. That followed two decades working in the district as an assistant principal at Delcastle Tech, principal at Hodgson Vo-Tech, and assistant superintendent. During his time as superintendent, he served a term as President of the Delaware Chief School Officers Association for the 2007-08 school year. He also spent time earlier in his career as a special education teacher in the Alfred I. DuPont School District.

“I am honored to accept this opportunity to support the outstanding work of our educators and continue the Administration’s commitment to give our students the best opportunity to learn and achieve,” said Godowsky. “If I’m fortunate enough to be confirmed by the Senate, I look forward to successfully continuing the Governor’s priorities, while building on the critically important relationships among school districts and charters, teacher groups, parents, legislators, and community leaders for the benefit of our students.”

Photos from the day’s events

With free community college and an aggressive effort to help students continue education beyond high school, Delaware is recognized as a model for President Obama initiative

Newark, DE – Highlighting Delaware as a model state for providing students with preparation for and access to educational opportunities beyond high school, U.S. Education Secretary Arne Duncan used the state’s efforts to advocate for President Obama’s America’s College Promise proposal to make community college free. Governor Markell, along with U.S. Senators Tom Carper and Chris Coons, joined Duncan for a discussion with students who have benefited from the state’s SEED scholarship, which provides two years of free college tuition to Delaware high school graduates with at least a 2.5 grade point average. They also highlighted recent progress the state has made in preparing students for education beyond high school, with record high graduation rates, record low dropout rates and double the number of high school students enrolled in college courses compared to last year. 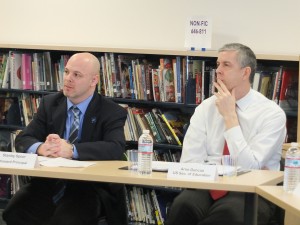 “Today, more than ever, Americans need more knowledge and skills to meet the demands of a growing global economy without having to take on decades of debt before they even embark on their career,” said Duncan. “That means it’s more important than ever that we ensure that the opportunities offered to students today in Delaware are made available across the country. I applaud Governor Markell for having the vision to find new ways to provide access to college and career training programs.

“We also know that those opportunities are only possible for students because of great teachers and school leaders. Their work is why the state is reducing dropout rates while increasing graduation and college attendance rates.”

The SEED program uses state funds to pay for tuition at Delaware Tech and for the University of Delaware’s two-year Associate in Arts program. Markell signed legislation in 2010 to create the Inspire Scholarship – a similar program that would provide qualifying Delaware State University students with the same amount of tuition that SEED scholars receive. 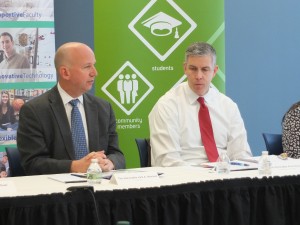 “No student who would benefit from an education here should be denied that opportunity because of an inability to pay,” said Markell. “That’s the message we send through our SEED and Inspire scholarships and it’s exciting to see the President take that message to community colleges across the country.  But we know we can do more to ensure students have access to the best education and training for them. It’s why we’re giving more students access to college-level courses as well as opportunities to earn professional credentials in growing industries while still in high school.”

Today’s event at Delaware Tech’s Stanton Campus followed last week’s launch of the Governor’s Pathways to Prosperity initiative, which will establish partnerships with Delaware employers, universities, and school districts to prepare students for a bright future in high-demand fields and careers. The Governor and Secretary highlighted the effort today as an important way for Delaware to build on its efforts to prepare young people for good jobs in the new economy.

The state is dedicating more than $1 million of federal grants to support school districts that make the pathway programs available to students, who will take hundreds of hours of specialized instruction and hands-on training. They will have the opportunity to graduate with industry-recognized certificates and college credits.

“I am proud that Secretary Duncan chose Delaware to hold a roundtable discussion on workforce development and college affordability,” said Carper. “These are the kinds of conversations we need to be having as we continue to explore the best ways to ensure all Americans have the opportunity to obtain a quality education so that they can be competitive in the global market place. I think we do a good job of doing that here in the First State, but we can always do better, and I thank Governor Markell for leading a thoughtful discussion among students and business leaders we gathered here at Del Tech today.”

Earlier in the day Duncan and Markell visited Howard High School, where they observed an English class and spoke with teachers, as well as Principal Stanley Spoor, about the remarkable progress the school has made in recent years with support of funds the state won through the federal Race to the Top grant competition. Four years ago, less than half of Howard students scored proficient in math and reading. Last year, 82 percent were proficient in reading and 79 percent were proficient in math.