Update: Delaware crew in California as officials increase “National Fire Preparedness Level” to maximum of 5 on a 5-point scale

A wildfire crew led by the Delaware Forest Service is near completion of a two-week assignment on the Fork Complex Fire, a 28,736-acre blaze near Hayfork, California in the Shasta-Trinity National Forest. Almost 2,400 personnel are battling the fire that is currently 26 percent contained. The Fork Complex is one of several large wildfires in Northern California that together cover more than 223,000 acres, one of the major factors that prompted the National Interagency Fire Center (NIFC) to increase its National Preparedness Level today to the maximum of 5 on a 5-point scale, which means that “geographic areas are experiencing major incidents which have the potential to exhaust all agency fire resources. Eighty percent (80%) of Type 1 and Type 2 Incident Management Teams and crews are committed, as well as the majority of other National Resources.” According to Aitor Bidaburu, chair of the National Multi-Agency Coordinating Group (NMAC), “A significant amount of initial and extended attack and large fire activity has occurred over the past several days as a result of lightning storms that have intensified local and geographic response,” said  “Given the continuing hot and dry weather and the increase in fire activity in the western U.S., the decision to move to Preparedness Level 5 depicts the complexity that fire managers are encountering to assure that adequate firefighting resources are available for protection of life, property and our nation’s natural resources.” According to the latest NIFC situation report, as of August 13 there were 73 uncontained large fires burning nationwide, of which 34 were located in Northern California.

DFS Assistant Forestry Administrator Kyle Hoyd filed this report from the Fork Complex on Wednesday evening: “Yesterday we held line during a burnout operation. Burnout was a success and we are holding it today. If all goes well today, it will be a win.” Fire officials on the scene report that Delaware’s team has “excellent crew morale.” With an increasingly high demand for firefighters and resources, Delaware state forester and veteran crew boss Michael Valenti of Dover will be leading a crew from Maryland that will mobilize Saturday morning and is expected to be assigned to fight fires in Montana in the Northern Rockies fire region. Valenti will be accompanied by his son Nathan, who will be on his first firefighting assignment. Delaware’s team could return to the First State on August 16 or August 17, depending on travel arrangements and flight times. Keep up with latest news on the wildfire crew on the Delaware Forest Service Facebook page.

HAYFORK, Calif. (Aug. 6, 2015) — A team of 20 wildland firefighters under the direction of the Delaware Forest Service is working with 1,165 personnel currently battling the Fork Complex, a group of lightning-caused fires near Hayfork, California that totals 11,862 acres but is only 7 percent contained. Fire resources on the Fork Complex include 26 crews, 4 helicopters, 128 engines, 30 dozers, and 30 water tenders with road closures and evacuations in effect for the area. California officials declared a state of emergency late last week due to the widespread wildfires that have burned upwards of 190,000 acres.

For the past two days, Delaware’s crew has been working on the Peak Fire, a 706-acre blaze burning on Plummer Peak, south of the town near Highway 3. According to fire officials, Delaware’s job is to “Establish indirect control lines” and “Hold and patrol established lines.”

Kyle Hoyd, the Delaware Forest Service’s assistant forestry administrator, summarized the crew’s effort: “We did a burnout with two engine teams on the Peak Fire off of a dozer line and put hand line around several structures in the same area.” Earlier in the week, Hoyd reported that “everyone is doing well” but the “fire is in steep terrain with multiple hazards.”

The crew’s hard work and effort has been paying off. According to the U.S. Forest Service, “The Peak fire was active throughout the day with continued burning to the west; crews remained in place protecting structures (homes, residences, and out buildings). Significant progress was made with a dozer line completion on the northwest division of the fire, east of Highway 3.”

Crews might not get relief from the weather forecast. Officials say that “Warm and dry conditions will continue through the end of the week and as the smoke inversion begins to clear; this presents the possibility of more direct heat in and around the fire areas as well as more intense burning.”

The Delaware Forest Service also dispatched James Dowd from Blackbird State Forest to work as an equipment manager on the Mad River Complex, along with Michael Nelson of Pennsylvania, who is assigned to the Reynolds Fire in Montana. 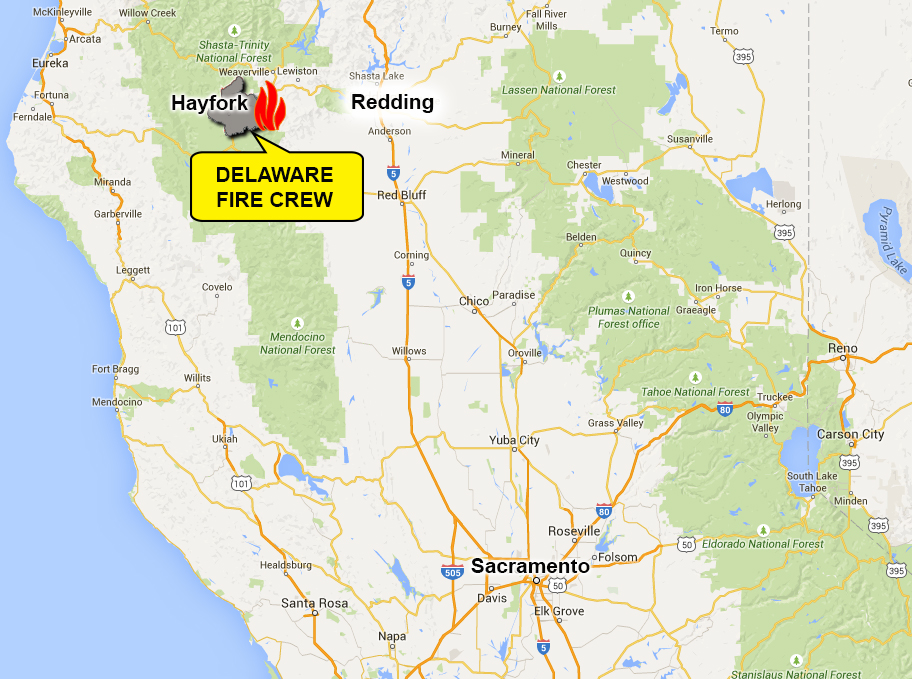