DOVER, Del. (March 16, 2021) – The Delaware Department of Agriculture (DDA) is warning anyone who purchased turtles, specifically the red-eared slider turtle, between August 2020 and January 2021 to take extra precautions to prevent illness.

The CDC and officials from several states are investigating a multistate outbreak of Salmonella Typhimurium linked to small turtles. As of February 20, 2021, a total of 22 people infected with the outbreak strain of Salmonella Typhimurium have been reported from seven states, including Pennsylvania, New Jersey, Maryland, Connecticut, North Carolina, Florida, and California. Eight individuals have been hospitalized, and one death has been reported from Pennsylvania. Currently, there are no confirmed cases in Delaware associated with this outbreak, but there is concern regarding the sale and distribution of red-eared slider turtles in Delaware.

Of the people interviewed by health officials, a majority reported having contact with a pet turtle, with reports of turtles with shells under 4 inches. Federal law prohibits the sale and distribution of turtles with shell lengths less than 4 inches, and this includes offering them for adoption or for free.

An exotic animal can be a live wild mammal, a hybrid of a wild mammal or a live reptile not native or generally found in Delaware. Most exotic animals are regulated in Delaware because they may pose a health or ecological threat to Delaware. Red-eared slider turtles are a non-native invasive species. They are sometimes mistaken as being native because they are so common in the wild. Since the red-eared slider is non-native, residents must obtain an exotic animal permit from the Delaware Department of Agriculture before purchasing by state law. In addition to state law, each county has regulations regarding the ownership of exotic animals.

One of the benefits of permitting exotic animals is that DDA can reach out to owners to alert them of potential health issues with their animals, such as this Salmonella outbreak. DDA asks all residents who have purchased a red-eared slider turtle in this timeframe to contact the Department to obtain a permit. More information on permitting exotic animals is online at https://agriculture.delaware.gov/poultry-animal-health/exotic-animals.

It is illegal for owners of red-eared slider turtles to release them into the wild because they are an invasive species in Delaware. Releasing non-native animals as well as any captive animal into the wild creates a risk of spreading diseases to the native population. Residents who have purchased turtles, specifically the red-eared slider turtles, and no longer want to keep their turtles can contact the Delaware Department of Natural Resources and Environmental Control’s Division of Fish and Wildlife at 302-739-9912 for guidance. 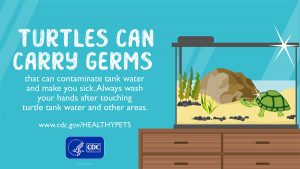 It is normal for reptiles, including turtles, to shed the Salmonella bacteria. It does not mean that the animal is sick; however, people who own or come in contact with turtles should take steps to stay healthy around their pet:

• Always wash hands thoroughly with soap and water after touching pets and other animals, cleaning, caring for the animal, or cleaning its habitat.
• Don’t put your hands in your mouth after petting or playing with animals. Keep other items that have come into contact with animals out of your mouth.
• Don’t kiss cats, dogs, chickens, turtles, lizards, or other pets or animals.
• Don’t let children younger than age 5, people with weakened immune systems, or older adults touch high-risk animals (like turtles, frogs, chickens, or ducks) or their belongings or habitats.
• Don’t eat or drink around high-risk animals or in areas where they live and roam. Don’t let turtles roam freely in areas where food is prepared or stored, such as kitchens.
• Clean your pet’s bed, cage, terrarium, or aquarium and its contents (such as food and water bowls) outdoors. If you must clean your pet’s habitat indoors, use a bathtub or large sink that can be cleaned and disinfected. Avoid using a kitchen sink, if possible.
• Take your pet to the veterinarian regularly. By keeping your pet healthy, you also help to keep yourself and your family healthy.

Most people infected with Salmonella develop diarrhea, fever, and stomach cramps six hours to six days after being exposed to the bacteria. The illness usually lasts four to seven days, and most people recover without treatment. In some people, the illness may be so severe that the patient needs to be hospitalized. Children younger than five years, adults 65 years and older, pregnant women, and people with weakened immune systems are more likely to have a severe illness.

Call your health care provider right away if you are exhibiting severe Salmonella symptoms. These symptoms can include: diarrhea and a fever higher than 102°F, diarrhea for more than three days that is not improving, bloody diarrhea, so much vomiting that you cannot keep liquids down, and signs of dehydration, such as not urinating (peeing) much, dry mouth and throat, and feeling dizzy when standing up.
For more information regarding the outbreak, visit the Centers for Disease Control and Prevention at https://www.cdc.gov/salmonella/typhimurium-02-21/details.html.