“There’s nothing more important than making sure that all Delaware children have the chance to excel,” said Governor Carney. “The Summer Fellows will gain paid work opportunities and valuable life experiences. I’m looking forward to meeting with the inaugural class. Thanks to the Department of Education and the United Way of Delaware for their coordination on this project.”

Summer Fellows will gain real-world experience in education, community, and State Government as well as receive academic credit for their participation in the program.

“This program is a ‘win’ on so many levels,” said Dr. Mark Holodick, Secretary of the Delaware Department of Education. “It gives our high school students – and potential future educators – the opportunity to earn money gaining valuable work experience this summer while also helping our community-based organizations with a critical workforce challenge so they can provide quality summer experiences to our younger students.”

“The Governor’s Fellowship Program is a compelling opportunity,” said Michelle Taylor, President and CEO of United Way of Delaware. “Young leaders learn how Delaware’s key decision makers drive change, while helping others close the academic achievement gap. For a young person eager to lift up their own community while gaining firsthand experience regarding public service, the Governor’s Fellowship Program is a doorway to opportunity, and a win-win for participants and the students they help. I can’t recommend the program enough and encourage all eligible students to apply.”

Applications for the Governor’s Summer Fellowship Program will be accepted on a rolling basis starting May 25th. Prospective fellows must be committed to working for the duration of the program which runs from June 21, 2022 until August 12, 2022.

HARRINGTON – The Kent Conservation District recently received a Mid-Del Foundation grant in support of the annual Delaware Envirothon, an environmental education challenge sponsored by the Delaware Association of Conservation Districts (DACD), in which teams of Delaware high school students compete for scholarships and awards. DACD partners with DNREC’s Division of Watershed Stewardship, working with landowners and managers to implement agricultural and urban/suburban conservation plans.

The Kent Conservation District was among 29 local organizations receiving grants from the Mid-Del Foundation, the charitable arm for Harrington Raceway and Casino, at the foundation’s 17th annual grant luncheon on Nov. 12 in the casino’s gold room.

During the Delaware Envirothon, five-member teams test their practical knowledge and application of environmental science in the categories of aquatic ecology, forestry, soils/land-use, wildlife, air quality, and a current environmental issue, along with their public speaking skills. The state champion team goes on to represent Delaware in national competition. The Envirothon’s goals include:

For more information about the Delaware Envirothon, please visit www.delawareenvirothon.org or contact Rick Mickowski at 302-365-8979.

The Mid-Del Foundation supports organizations and activities involving agricultural, civic, and social needs in Delaware. Established to consolidate the charitable undertakings of Harrington Raceway, Inc., the Mid-Del Foundation has awarded nearly $1.4 million in grants since 2002. 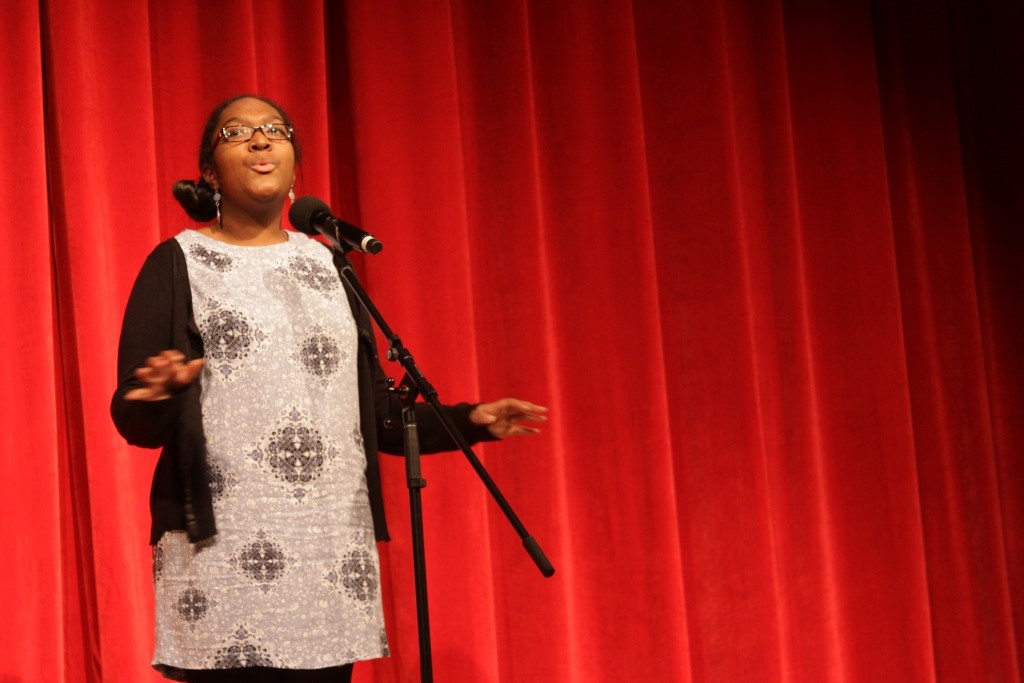 Hannah Sturgis, a junior from POLYTECH High School, is among the 53 Poetry Out Loud champions from every state, the District of Columbia, Puerto Rico, and the U.S. Virgin Islands who will participate in the National Finals of Poetry Out Loud: National Recitation Contest. The finals will be held at Lisner Auditorium in Washington, DC on May 3-4, 2016 and can be viewed on the live, one-time only webcast at poetryoutloud.org/competition/national-finals.

Hannah, a student from Smyrna, Delaware, received an all-expenses-paid trip to compete in the National Finals after advancing from high school and state-level competitions. For the National Finals, Hannah will recite three poems including Blackberrying by Sylvia Plath during the Region 1, Semifinals to be held on Tuesday, May 3 from 9 a.m. – 12 p.m.

“I love poetry because I do not yet fully understand it. I discover something new from reciting, reading or listening to it every day. It is beautiful and difficult; it pushes me to become better at it,” says Hannah.

Poetry Out Loud is a national arts education program that encourages the study of great poetry by offering educational materials and a dynamic recitation competition to high schools across the country. Information on Poetry Out Loud is available from the Delaware Division of the Arts at http://artsdel.org/poetryoutloud/ and http://www.poetryoutloud.org/.

Students from eighteen Delaware high schools will compete in the Poetry Out Loud state finals at the Smyrna Opera House on Tuesday, February 23 at 7 p.m. The event is free and the public is welcome to attend. Paul Weagraff, Director of the Delaware Division of the Arts will greet contestants and give opening remarks. He will be followed by J. Mack Wathen, Chair of Delaware State Arts Council, who will conclude by recognizing the panel of adjudicators.

Each of the eighteen participants will recite three poems that they have selected, studied, and practiced, representing more than 40 different poets including Henry Wadsworth Longfellow, Langston Hughes, William Ernest Henley, Robert Frost, and Emily Dickinson. The recitations are inspiring, moving, sometimes humorous, and always engaging. The winner will receive $200 and an all-expense-paid trip to Washington, DC, to compete in the national championship from May 2-4, where $50,000 in cash prizes and school stipends are awarded.

The 2016 Poetry Out Loud participants are:

To learn more about each high school student and their reasons for participating in Poetry Out Loud, please read their biographies here.

About Poetry Out Loud

The Delaware Division of the Arts sponsors the Poetry Out Loud: National Recitation Contest program in Delaware schools and the state finals. Competition begins at the classroom level in the fall and culminates with the state finals each spring. Eighteen schools and over 2,000 Delaware students participated in the Poetry Out Loud program in the current academic year. The Poetry Out Loud: National Recitation Contest competition is presented in partnership with the National Endowment for the Arts and the Poetry Foundation. For more details about the partnership and program, see the program overview here.

About the Delaware Division of the Arts

The Delaware Division of the Arts is an agency of the State of Delaware. Together with its advisory body, the Delaware State Arts Council, the Division administers grants and programs that support arts programming, educate the public, increase awareness of the arts, and integrate the arts into all facets of Delaware life. Funding for Division programs is provided by annual appropriations from the Delaware General Assembly and grants from the National Endowment for the Arts, a federal agency. For more information about the Delaware Division of the Arts, visit artsdel.org or call 302-577-8278.

NEW CASTLE (April 23, 2015) – As part of its coordinated strategy to reduce the impact of addiction, the Department of Health and Social Services on Thursday kicked off a statewide campaign for prevention of underage and binge drinking with events at high schools in each of Delaware’s three counties.

The campaign, in English and Spanish, will include billboard, bus, print, TV, radio, online, movie theater and social media marketing, plus messages in schools and stores. The campaign is divided into three distinct messages:

“This aggressive campaign is critical to our overall strategy of reducing the toll that the addiction epidemic is taking in our state,” DHSS Secretary Rita Landgraf said. “Our young people need to know that using and abusing alcohol can be harmful to their immediate health and can be the first step down a path that eventually leads to addiction. Education and prevention are important to helping them understand those risks.”

In a 2014 study of binge drinking by the UD Center for Drug & Alcohol Studies, 61 percent of UD students surveyed said they had drunk five or more drinks in a single sitting in the past month. Males (65 percent) were more likely to engage in binge drinking than were females (58 percent).

DHSS launched the prevention campaign with events at three schools: Concord High School near Wilmington; Smyrna High School; and Sussex Central High School near Georgetown. Speakers included Gov. Markell, First Lady Carla Markell, DHSS Secretary Landgraf, Public Health Director Dr. Karyl Rattay, Robert Kracyla, deputy director of the Delaware Division of Alcohol & Tobacco Enforcement, and Clint Ferrazo, a young person in recovery from Caravel Academy. At the events, students were quizzed about underage drinking, tried on Fatal Vision goggles that simulate the vision of someone who is impaired from drinking, and were able to ask questions of the speakers. At Smyrna High School, students walked through an inflatable brain to see the parts of the brain damaged by drinking.

The campaign is funded by money left from a previous Strategic Prevention Framework State Incentive Grant from the Substance Abuse and Mental Health Services Administration (SAMHSA). The funds must be used to target underage and binge drinking in young people age 12-25.

Delaware Health and Social Services is committed to improving the quality of the lives of Delaware’s citizens by promoting health and well-being, fostering self-sufficiency, and protecting vulnerable populations.