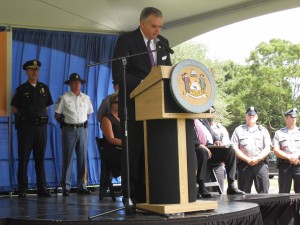 Dover-  U.S. Transportation Secretary Ray LaHood announced today that the Delaware Office of Highway Safety (OHS) will receive $900,000 in federal support to expand the Department’s “Phone in One Hand, Ticket in the Other.” pilot enforcement campaign to reduce distracted driving.

“We thank Secretary LaHood for personally coming to Delaware to announce this grant.  We will use this money to implement a campaign to encourage motorists to put their cell phones down while driving,” said Delaware Governor Jack Markell.  “By raising awareness of the dangers of distracted driving, we help prevent needless crashes and keep Delaware’s roads safer.  Safer roads mean people get to jobs, schools, and businesses without delay and without injury.”

DOT is providing Delaware with a total of about $900,000 in federal support for a pilot program that will examine whether increased police enforcement coupled with paid media and news media coverage can significantly reduce distracted driving over a widespread area.

OHS is planning to use $300,000 for three 2 week waves of enforcement for the “Phone in One Hand, Ticket in the Other” campaign with the first wave to run September 18 to October 1, 2012 followed by April 9-22, 2013 and June 4-17, 2013 and will include statewide enforcement in all three counties and will include every police department in the state.  Another $400,000 will be allocated towards paid media that will accompany the enforcement efforts and $200,000 toward evaluation of the demonstration project.

“This dedicated enforcement effort coupled with public education and program evaluation illustrates the seriousness in which we view distracted driving. For those who still insist on texting and talking on their cell phone this grant will go a long way to allow them to also talk to one of Delaware’s finest,” said Lewis D. Schiliro, Secretary of the Department of Safety and Homeland Security.

Delaware is one of only 2 states that have been selected to receive federal grants for “Phone in One Hand, Ticket in the Other” pilot project.  This multi-market effort will mirror the approach used in smaller-scale demonstration projects completed in 2011 in Hartford, CT, and Syracuse, NY.  The 2011 pilot projects found dramatic declines in distracted driving in the two communities tested—with texting dropping 72 percent in Hartford and 32 percent in Syracuse.

“We congratulate Delaware’s Office of Highway Safety and Secretary LaHood for bringing this important effort to our state,” says Jim Lardear, Director of Public and Government Affairs for AAA Mid-Atlantic.  “AAA knows that it is simply not enough to just pass a law; good laws must go hand in hand with visible, committed enforcement and broad public awareness campaigns.  We continue to urge drivers to avoid all forms of distraction behind the wheel.”

If a police officer observes you using a handheld device while driving they can pull you over and give you a $106 fine for your first offense.  If you get caught again penalties increase and can go up to $300.  Violations do not incur points on your driver’s license.

Some exceptions to the law include the activation or deactivation of hands free equipment because not all cell phones are voice activated. Thus, drivers may pick up the phone to dial, then put it down and use hands free equipment to communicate.  Another exception allows a person to use a hand held cell phone to call authorities to report a fire, road hazard, traffic crash, reckless driver or any other unsafe road conditions.  Also exempt are those business or government employees who use a 2-way radio that is mounted or attached to their vehicle to communicate with dispatch or other employees as a part of their official work duties. 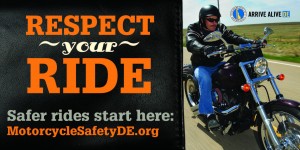 This wave comes after two successive motorcycle crash fatalities on May 18th & 19th.  The first crash involved a motorcyclist driving on a suspended licens and fictitious Delaware registration.  He passed another vehicle on a double yellow line while in a curve, and struck a pedestrian crossing the street.  The impact killed the pedestrian.  The second motorcyclist failed to negotiate a curve and crashed in the roadway and was killed.  Alcohol is considered a factor in the crash. 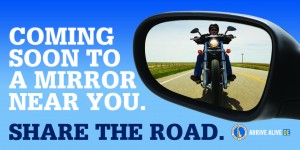 As the weather warms up, and more motorcyclists are on the roads, all drivers should be vigilant about sharing the road with motorcyclists.  They are easy to miss in a vehicle’s blind spot.  Always look twice before changing lanes or making turns at intersections.

Motorcycle riders can also go to www.MotorcyclesafetyDE.org, to find information about the proper tools and training to make them the safest rider they can be.  Any person who operates a motorcycle, or other 2-wheeled motor driven vehicle, must have a driver’s license with a motorcycle endorsement before taking to the road.  To obtain the endorsement a person must pass a written exam and road skills tests or complete an approved motorcycle rider education program.

OHS is offering the following safety tips for both motorists and motorcycle operators: