Gov. John Carney joined Delaware Department of Natural Resources and Environmental Control Secretary Shawn M. Garvin Monday to dedicate Jason Beach as a historic site, in recognition of its significance and to coincide with the Juneteenth holiday.

The Governor and Secretary, along with town of Laurel Councilmember Jonathan Kellam, Reps. Timothy Dukes and Ruth Briggs-King, and students from the Minority Educational Regional Incentive Training (MERIT) program unveiled a Division of Public Archives historical marker while the DNREC Division of Parks and Recreation introduced interactive wayside exhibits that link to oral histories of Jason Beach from several community members.

“We are here to recognize the community who has cherished this land for nearly a century, declare Jason Beach as a historic site and return it to its rightful name. We felt Juneteenth was a good time to honor Jason Beach, its history and its future,” Governor Carney said. “On Juneteenth, we recommit to having a better understanding of our history in our state and our nation. I encourage all Delawareans to explore more about Juneteenth in Delaware today.”

The Trap Pond park area was formerly a recreation destination for the Black community in the mid-1900s. At that time, it was known as Jason Beach in honor of Dr. William C. Jason, the second and longest-serving president of Delaware State University whose longevity and leadership provided much-needed stability at a time when the then-state college for African American students did not receive adequate state funding.

The Jason Beach area was used for swimming, a variety of entertainment purposes and religious ceremonies. The oral histories bring to life stories of gatherings to socialize, dance, have picnics, make new friends, and attend church services and baptisms. The Civil Rights Acts of 1964 eventually ended the use of Jason Beach as a segregated area and over time it became known as Cypress Point.

“The history of Jason Beach needs to be preserved and told, and that has been the aim of DNREC’s Division of Parks and Recreation team for quite some time,” Secretary Garvin said. “The ceremony to re-dedicate this area is the result of a large collaborative effort, including members of the community with personal connections to Jason Beach along with DNREC staff and volunteers who spent countless hours of research work to give the history of this special place the recognition it deserves.”

The DNREC Division of Parks and Recreation made $70,000 in renovations to the Jason Beach facilities, including improvements to the historic restroom and repairs to the parking lot.

Rep. Timothy Dukes contributed $2,575 for the fabrication and installation of the Division of Public Archives Jason Beach Historical Marker.

Councilmember Kellam spoke about his time at Jason Beach as a kid and later as a lifeguard on the other side of Trap Pond at Headquarters Beach, which was formerly used by the white community.

Kianna Kelley and Jaden Burton, both MERIT students and 2022 graduates of Sussex Central High School, spoke about what the Jason Beach historic site means to their generation.

MERIT was founded by John Hollis in 1974 with the DuPont Company for students with high potential from groups, such as minorities and women, who tend to be underrepresented in the areas of science, mathematics and engineering. The program’s goals parallel Dr. Jason’s work to ensure quality education is available and accessible to all Delawareans.

For more information about Jason Beach, including historical information, the oral histories and more, go to www.destateparks.com/CommunityHistories/JasonBeach.

The Delaware Department of Natural Resources and Environmental Control protects and manages the state’s natural resources, protects public health, provides outdoor recreational opportunities and educates Enjoy the natural diversity of Delaware’s 17 state parks. Delawareans about the environment. The DNREC Division of Parks and Recreation oversees more than 26,000 acres in 17 state parks and the Brandywine Zoo. For more information, visit the website and connect with @DelawareDNREC on Facebook, Twitter or LinkedIn.

The Delaware Public Archives was proud to unveil its newest State of Delaware Historical Marker on Wednesday, February 3, 2022, in Wilmington, Delaware honoring the Abraham Shadd Family.
A cobbler by day and an abolitionist by night, Abraham Shadd lived in Wilmington, Delaware in the early 19th Century with his family.  Shadd owned several pieces of property, served in a number of anti-slavery organizations, and actively fought in the abolitionist movement. Following the 1850 Fugitive Slave Act, Abraham, his wife Harriet, and their 13 children would move to Canada. His eldest daughter, Mary Ann Shadd Cary, would become the first Black woman newspaper editor in North America, as well as an advocate for the abolitionist and women’s suffrage movements.
More than 90 guests and friends joined with the Honorable John C. Carney, Governor, State of Delaware, who opened the event by proclaiming February as Black History Month; the Honorable Bethany Hall-Long, Lieutenant Governor, State of Delaware; the Honorable S. Elizabeth Lockman, State Senator and State of Delaware Historical Marker sponsor; members of the Delaware Black Caucus; and direct descendants of Abraham Shadd.

Photos from the Dedication: 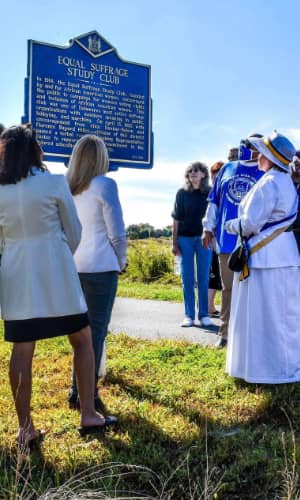 The Delaware Public Archives & Delaware Heritage Commission are proud to present the installation and unveiling of the “Equal Suffrage Study Club” Historical Marker — the final marker in the series of four Delaware Historical Markers celebrating the centennial of the passage and ratification of the 19th Amendment to the Constitution of the United States providing for women’s suffrage.

The Delaware Public Archives is happy to present the installation of a NEW Delaware Historical Marker, “Women’s Suffrage in Delaware.”  This Marker remembers the 1920 conference that was held by Sussex County’s members of the General Assembly that heard opinions in support of and against women’s suffrage.

This Delaware Historical Marker, the third of four Historical Markers celebrating the centennial of the passage and ratification of the 19th Amendment to the Constitution of the United States providing for women’s suffrage, is located near the intersection of S. Bedford Street and The Circle, outside of the Sussex County Courthouse in Georgetown, Delaware.