Dover, DE – Governor Markell and Nevada Governor Brian Sandoval announced today the start of the Multi-State Poker Network (MSPN), which allows poker players from both states to begin competing against one another at the same virtual tables.

“Today is the start of an exciting time for iGaming and for Delaware,” said Governor Markell. “The MSPN is the first multi-jurisdiction poker network of its kind in the world. We now offer an online poker option that is more competitive and more enjoyable for its users, thanks to this collaborative effort. I applaud Governor Sandoval for his leadership and commitment to this effort and thank our Department of Finance for working with their counterparts in Nevada to implement this initiative.”

“The MSPN follows Nevada’s and then Delaware’s entry in 2013 as the first two states to launch internet gaming,” said Secretary of Finance Tom Cook. “Along with creating an enhanced player experience, the MSPN also brings added security to the system, including upgraded geo-location features.”

“Nevada and Delaware are at the vanguard of internet gaming, leading by example to provide a legal, tightly regulated online poker market that protects consumers in both our states.  The gaming industry is evolving, and Nevada is evolving with it,” said Governor Brian Sandoval.

Starting today, Delawareans will be able to play Nevadans at the same virtual table with all the consumer protections that come with a regulated market. Until today, consumers could only play across state lines in unregulated games operated by illegal, offshore sites that have no standards for protection of personal or financial information, nor recourse against bad actors.

The MSPN is the result of the Multi-State Internet Gaming Agreement that Governors Markell and Sandoval signed in February 2014. To play, competitors must be 21 or over.  They must log on using a PC or Mac computer located in Delaware or Nevada.

In Delaware, players can access the MSPN by visiting the Dover Downs, Harrington Raceway, or Delaware Park websites.

The effort to start MSPN has included steps to establish strong safeguards that ensure these games may only be accessed by persons 18 or older located in Delaware and Nevada.

Wilmington, DE – Governor Markell and Nevada Governor Brian Sandoval took an important step forward in online gaming today, signing a first-in-the-nation Multi-State Internet Gaming Agreement that will eventually allow poker players in both states to play against each other online at the same virtual tables.

“Gov. Sandoval and I both share the goal of ensuring that our states’ gaming industries are as competitive as they can be, while ensuring that games are conducted fairly, honestly, and securely,” said Governor Markell. “This Agreement represents a crucial step in Delaware’s and Nevada’s efforts to make our online poker offerings more diverse, more competitive, and ultimately more enjoyable. I am grateful for Governor Sandoval’s support and leadership in this effort.” 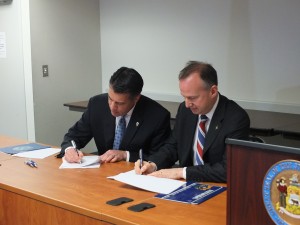 The agreement develops a framework through which the two states will jointly adhere to minimum regulatory standards.  It also allows Member States to retain the necessary control over who offers online gaming within their borders, and it allows Member States to pursue the particular applications of online gaming that make the most sense for them. For example, Nevada will only allow online poker games, and under this agreement, Member States have the flexibility and discretion to make those kinds of policy determinations for themselves.

“This is truly a historic day for Nevada, Delaware, and the country.  One year ago the Nevada Legislature passed and I signed an Internet gaming bill into law, and today we are just beginning to witness the potential of this legislation with the signing of this agreement,” stated Governor Brian Sandoval.  “The approach we’ve taken will allow us to pursue greater opportunities by establishing a strong framework for collaboration in this new frontier.  The possibilities that are ahead of us are truly extraordinary. The agreement we’ve signed today provides the tools and the structure necessary for us to pioneer this expanding industry together, as states and as partners.  I have had the pleasure of working with Governor Markell in the past and look forward to this partnership with the State of Delaware.  I would like to thank him for his leadership and willingness to join Nevada in this new frontier of gaming.”