Wilmington, DE – The Joint Finance Committee (JFC) of the Delaware State Legislature today approved a plan for the expenditure of settlement funds to address policing efforts in Delaware’s two largest cities. The Governor issued this statement following the vote:

“The JFC’s decision allows us to move quickly to stem gun violence in Wilmington and Dover,” said Governor Markell. “I’m pleased that Delaware State Police will combine their efforts with Wilmington and New Castle County Police to create a high visibility uniformed presence in the city.”

City of Dover: $578,915 for expanded police patrols and installation of video equipment. 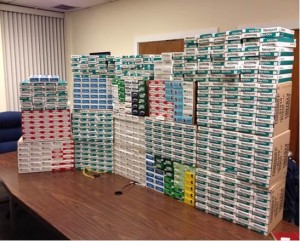 Dover – A 48-year-old New York man, accused of smuggling more than 530 cartons of cigarettes through Delaware, was charged following a traffic stop in New Castle.

Ahmed M. Ubuzeid of Bronx, NY was traveling on I-295 in New Castle when his vehicle was stopped for a traffic violation by Delaware State Police (DSP). During the stop, it was discovered that the vehicle contained 530 cartons of untaxed cigarettes with an approximate street value of $63,000.