Wilmington, DE – Governor Markell announced today that the state will name the New Castle County Courthouse after the late Leonard Williams, the state’s second African-American judge. The building’s new signage will be unveiled next year.

“Judge Williams played a significant role in the civil rights movement in Delaware, from excelling as one of the first black students at the University of Delaware to fighting for justice in his partnership with Louis Redding and helping pave the way for future African-American attorneys and judges,” said Governor Markell. “With this naming, the state will fulfill commitments that call for using the New Castle County Courthouse to pay tribute to his achievements.”

In 1997, Wilmington City Council enacted an ordinance directing that land owned by the City at 4th and Walnut Streets include a deed restriction requiring any courthouse built there be named after Judge Williams. Mayor James H. Sills, Jr. imposed that deed restriction in 1998, and the property was sold later that year to the State to serve as the location of the New Castle County Courthouse. Since that time, language in the State’s Bond and Capital Improvements Act has vested discretion for the naming of the courthouse in the Director of the Office of Management and Budget or his or her predecessors.

Today’s announcement reflects the Governor’s belief that the state must honor the deed restrictions that existed when the state purchased the property.

After becoming the fifth African-American admitted to the Delaware bar in 1959, Williams was a longtime law partner of Louis L. Redding, Delaware’s first black lawyer who famously and successfully argued a case that became part of the U.S. Supreme Court’s Brown v. Board of Education decision outlawing segregation. Redding chose Williams to help him continue to pursue civil rights cases, including in the Supreme Court.

Williams would become an assistant city solicitor in Wilmington, and then chief prosecuting attorney for Municipal Court until 1966, when he was appointed to the bench. He served in that role for 32 years before Municipal Court was merged with the Court of Common Please, which currently resides in the New Castle County Courthouse that will bear Williams’ name.

Following his death in 2013 at age 78, the News Journal noted Williams’ commitment to organizations dedicated to justice and serving those in greatest need, including the NAACP, the National Welfare Rights Council, Layton Home, Peoples Settlement Association, and Walnut Street YMCA. In addition, he was “mentor-in-chief” at his former school, Howard High, where he worked with juniors and seniors interested in the legal profession.

The program, which diverts people arrested for certain drug offenses to treatment instead of a trial, has met its goals of recovery and lower rates of recidivism for people with drug addictions.

“This program’s success in reducing recidivism and giving Delawareans the treatment they need is a reminder to all of us that strengthening our justice system so often does not mean putting more offenders in prison,” said Governor Markell. “I thank everyone involved in the Drug Diversion Court over the past two decades for their dedication to the success of its participants and for making Delaware a national model for effective treatment and recovery.”

As part of today’s ceremony for the ten latest participants to successfully meet the program’s requirements, Judge Jerome Herlihy, who now presides over the Drug Court, announced on the record that the criminal charge against each graduate was dismissed and presented them with certificates. The Superior Court reports that participants have recidivism rates around 32 – 35 percent in the two years following graduation. 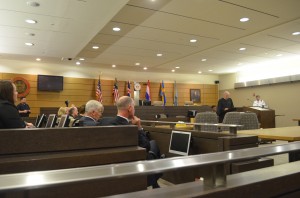 “Over 20 years our drug court has faced a number of challenges due to the wide variety of drugs being abused or to which people are addicted,” said Judge Herlihy. “But now with more plentiful, stronger and cheaper heroin, the challenge to us is greater and more serious than probably ever before. This challenge is to all inside and outside the criminal justice system. It will not end soon.

“This Drug Court has enjoyed the support of all three branches of government since its inception. We are great full and look forward to this support continuing.”

According to the Superior Court, it offered one of the first Drug Diversion Courts in the United States. Today, there are now more than 2,500 such programs.

“There’s no doubt that we are up against a powerful enemy,” said Sen. Carper. “But there are ways to break the cycle of addiction, and the drug court is one of those ways. I’m proud that Delaware was among the first states to adopt a drug court – and many other states have followed because it not only works, but it’s the right thing to do.”

Established under the leadership of Judge Richard Gebelein in 1994 during then-Governor Carper’s administration, the Court has served nearly 5,900 people who have voluntarily entered its program, which partners with private treatment providers to direct individuals to the help they need over the period of six months to one year. Of the participants, about 3,800 have graduated after attending individual and group therapy session, receiving additional outpatient or inpatient services if required, consistently proving they are clean, and taking part in status conferences with the Court.