“Congratulations to those programs that have maintained their accredited status as well as those who have joined the elite leaders in emergency management having earned accreditation through the Emergency Management Accreditation Program. Through their commitment and leadership, they have proven to their communities and stakeholders that their programs are sustainable and that they continue to focus on their communities’ best interests,” stated Nick Crossley, Director of the Hamilton County Emergency Management and Homeland Security Agency and the EMAP Commission Chair.

Providing emergency management programs the opportunity to be evaluated and recognized for compliance with standards certified by the American National Standard Institute (ANSI) and recognized by the industry complies with EMAP’s mission to build safer communities through credible standards of excellence. These programs demonstrate accountability and focus attention on areas and issues where resources are needed to heighten their preparedness efforts to address any technical or natural disaster that may affect their communities.

To achieve accreditation, applicants must demonstrate through self-assessment, documentation and peer assessment verification that its program meets the Emergency Management Standard set forth by EMAP. The emergency management program uses the accreditation to prove the capabilities of their disaster preparedness and response systems. Accreditation is valid for five years and the program must maintain compliance with the Emergency Management Standard and is reassessed to maintain accredited status.

DEMA Director A.J. Schall said “The team at DEMA started on this journey in 2018. Over the last eighteen months we have worked diligently to review our processes, plans, and relationships. Over that time, we learned a tremendous amount and modernized procedures.  This was a division-wide project and everyone on the team had an important part. I couldn’t be more proud for their dedication to the State.”

DOVER — Valentine’s Day is not just for sweethearts. Thursday, February 14 is the day that Schools and Foster Care Programs throughout Delaware will be able to pick up all the warm winter clothes collected by GACEC in their Heart 2 Heart Hugs annual campaign. Donations can still be dropped off at the GACEC office located in the old train station at 516 Loockerman Street in Dover.

Sue O’Day from Fleece for Keeps of Wilmington donated 65 blankets. (see photo and cutline below) Project Warm donated 800 winter coats and people from the community and other state agencies donated new store bought and handmade items for distribution.

This years distribution is on Valentines day with distribution to schools and foster care programs across Delaware. Some claim that this is too late for such a campaign. Wendy Strauss responded, “ Some of the items do go to students this winter. Mostly the schools need their inventory restocked so they have it when the need arises at the beginning and throughout the school year. Right now, retail stores are reducing their winter wear so it is a good time to buy and donate to the campaign.” 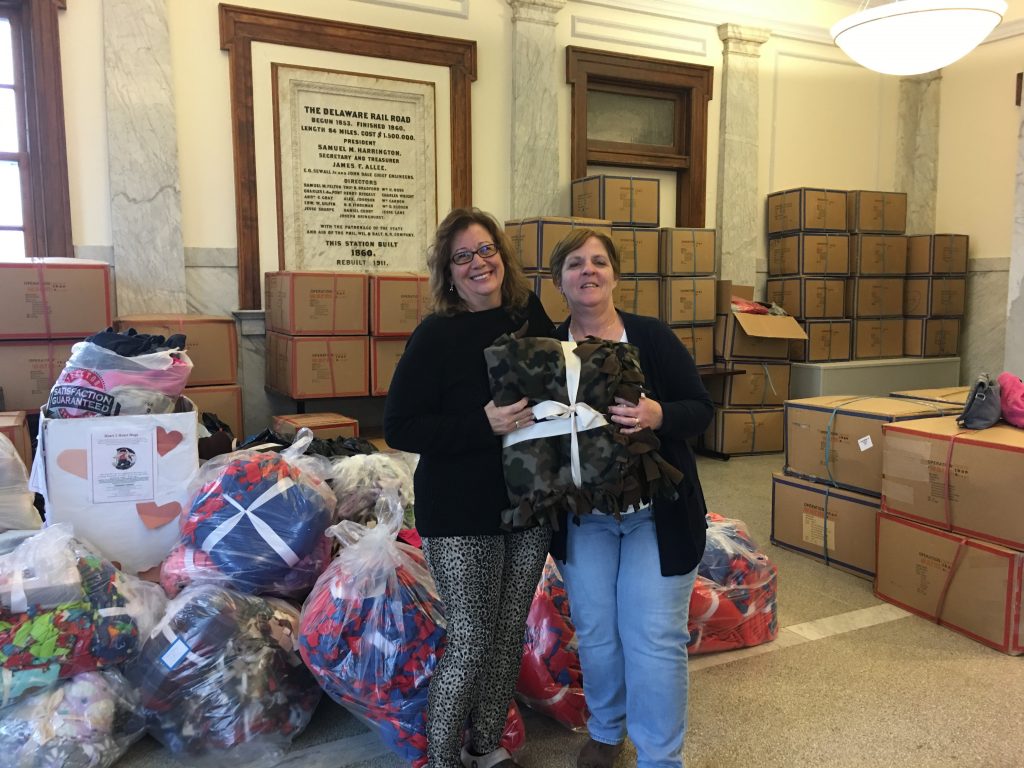 NEW CASTLE (Jan. 2, 2019) – The number of full-time equivalent primary care physicians providing direct patient care in Delaware in 2018 declined about 6 percent from 2013, a trend that resulted in a slightly lower percentage of physicians statewide who are accepting new patients, according to a new University of Delaware study of the primary care physician workforce commissioned by the Department of Health and Social Services (DHSS).

Despite the workforce trends, the UD study found that there are a sufficient number of primary care physicians in Delaware, “although their location and specialty is probably not optimal.” In 2018, there were 815 individual primary care physicians practicing in Delaware, down from 862 in 2013, and a full-time equivalent of 662 physicians statewide in 2018 vs. 707 in 2013. The study found that the 2018 numbers are at the upper range of what is desirable. Both Kent County – 2,069 patients per primary care physician – and Sussex County – 2,014 patients per physician – are above the 2,000-to-one ratio used by the U.S. Health Resources and Services Administration (HRSA) to designate shortage areas.

“The best preventive care and the most cost-effective care is provided by a strong and coordinated primary care workforce,” Secretary Walker said. “Primary care providers know their patients and their medical histories best and can provide the most effective, high-value, longitudinal care for chronic health conditions and other preventable diseases. As state government officials, our priority is to find ways to incentivize front-line care to perform as coordinated teams that are ultimately accountable for population health. We also need more primary care physicians to remain in practice and find ways to encourage new doctors, including those from minority and rural backgrounds, to choose primary care as their specialty.”

State Sen. Bryan Townsend and Dr. Nancy Fan, Chair of the Delaware Health Care Commission, are Co-Chairs of the Primary Care Collaborative, which is working on long-term solutions to support primary care in the state. The collaborative was created through Senate Bill 227, which aimed to strengthen primary care through a series of changes, including requiring insurers to reimburse primary care physicians and other front-line practitioners at the Medicare rate for the next three years. The collaborative, which has been meeting since September, is expected to issue its long-term recommendations by Jan. 8.

“It is vital that the State of Delaware, for the sake of Delawareans’ health, take steps to promote and strengthen primary care,” said Sen. Bryan Townsend, who sponsored Senate Bill 227 with Rep. David Bentz. “The declining rates of primary care providers practicing in Delaware or offering access to new patients are alarming. We have implemented immediate measures, and we have developed long-term solutions. The health and well-being of Delawareans, and the Delaware economy, cannot afford for us to delay in implementing those solutions, or for us to lack the courage to tackle complex policy and political issues.”

“This survey is very timely and demonstrates with supporting data the primary care physician crisis currently in Delaware,” said Dr. Nancy Fan, Chair of the Delaware Health Care Commission and an obstetrician/gynecologist in Wilmington. “Recognizing that primary care is foundational to effective, quality health care, the Health Care Commission is working through the Primary Care Collaborative to develop policy recommendations that will strengthen and maintain the current workforce and increase attractiveness of practice in Delaware for the future physician workforce. If something is not done immediately, these numbers will only get worse.”

“This DHSS study illustrates the poor access to primary care experienced by Delawareans,” said Dr. James Gill, a family medicine physician in Wilmington and a member of the Medical Society of Delaware who advocated for Senate Bill 227. “Increasing access to primary care will require increasing payment for primary care services by commercial payers in our state, which is currently 40 percent to 50 percent below the rest of the country. Senate Bill 227 has begun to move Delaware in that direction, and the Primary Care Collaborative is working to continue the work necessary to reduce the cost of care and improve the quality of care and the health of Delawareans.”

Among the other findings in the Primary Care Physicians in Delaware 2018 Survey:

Data collection for the Primary Care Physician in Delaware 2018 Survey was done during the spring and summer of 2018, with 2,533 physicians contacted by mail who have an active license with a Delaware address or an address with a ZIP code adjacent to Delaware. Of those contacted, 957 responded and provided usable data. Primary care physicians practice in one of five specialties: family practice, general practice, internal medicine, pediatrics or obstetrics/gynecology.

The Health Care Commission is prepared to award up to multiple applicants in amounts ranging from $25,000 to $250,000 through the Value-Based Payment Reform Fund for work that must be completed by Jan. 31, 2019. The commission has received a total of 45 applications from primary care providers, behavioral health providers, hospitals, Accountable Care Organizations (ACOs), Federally Qualified Health Centers (FQHCs) and clinically integrated networks, all of which must be licensed in the State of Delaware. The commission expects to award grants for small projects (up to $50,000) and large projects (up to $250,000), based on the scope of the project.

“We are pleased to announce the first mini-grant award to Christiana Care as a way for a prominent health care provider in our state to conduct a pilot project in the area of value-based payment reform,” said Department of Health and Social Services (DHSS) Secretary Dr. Kara Odom Walker, a board-certified family physician. “This is a significant step forward in terms of how health care will be delivered and paid for in Delaware. Additional awards are going through the review and approval process, and we look forward to making those announcements soon.”

“As our work with the State Innovation Model nears its conclusion, the mini-grants are an important milestone for health care providers in our state as they embrace change in health care delivery and plan for long-term sustainability in terms of innovation,” said Dr. Nancy Fan, Chair of the Delaware Health Care Commission. “Along with ongoing work through our practice transformation vendors, the mini-grants will give providers a practical way to facilitate change in the health care landscape.”

Applications, which were received during the summer, fell into one of three areas:

“The Delaware Center for Health Innovation (DCHI) is a public/private partnership that was created after Delaware received a four-year State Innovation Model grant from the Centers for Medicare and Medicaid Innovation,” said Julane Miller-Armbrister, executive director of DCHI. “We support innovative changes in health care delivery and payment in our state in order to drive quality and better health for the people of Delaware. The mini-grants are another step forward in achieving lasting change.”

NEW CASTLE (July 26, 2018) – As part of the State Innovation Model (SIM) initiative, the Delaware Health Care Commission is seeking applications from Delaware health care providers for one-time, value-based payment reform mini-grants to grow their capacity to integrate data, improve the coordination of patient care or increase their readiness to integrate into a total cost of care or Alternative Payment Model (APM).

The Delaware Health Care Commission is prepared to award up to 10 applicants in amounts ranging from $25,000 to $250,000 through the Value-Based Payment Reform Fund for work that must be completed or services procured by Jan. 31, 2019. Mini-grant applicants must be primary care providers, behavioral health providers, hospitals, Accountable Care Organizations (ACOs), Federally Qualified Health Centers (FQHCs) or clinically integrated networks, and must be licensed in the State of Delaware. Bidders may apply for multiple projects. The Health Care Commission expects to award grants for small projects (up to $50,000) and large projects (up to $250,000), based on the scope of the project. Applications are due no later than Aug. 30.

“These one-time mini-grants offer a great opportunity for health care providers in Delaware to conduct pilot projects in the area of value-based payment reform,” said Department of Health and Social Services (DHSS) Secretary Dr. Kara Odom Walker, a board-certified family physician. “To embrace this change, we urge providers to test out collaborations or partnerships in the areas of data integration, care coordination or readiness to integrate into an ACO or an Alternative Payment Method.”

“In our continuing work with the State Innovation Model, the Health Care Commission has embraced innovative ways to help practices succeed in the changing health care delivery environment,” said Dr. Nancy Fan, Chair of the Delaware Health Care Commission. “These mini-grants, along with the ongoing work through our practice transformation vendors, give us practical ways to help facilitate that change.”

Applications must be made in one of three areas:

“The Delaware Center for Health Innovation (DCHI) is a public/private partnership, supporting innovative changes in the way health care is delivered and paid for in order to drive quality and better health for all in our state,” said Julane Miller-Armbrister, executive director of DCHI. “We encourage Delaware health care providers to apply for these mini-grants as a way to pilot their ideas for comprehensive reform.”

Applications will be evaluated and considered as they are received, with the final notifications of award coming by Sept. 30. For potential applicants, the Health Care Commission will host a Q&A session via conference call at 2 p.m. Aug. 9. Please email DHCC@delaware.gov for call-in information. All questions and final applications also must be submitted by email to DHCC@delaware.gov.