NEWARK, DE (September 12, 2012) – City of Newark officials were joined this morning by Governor Jack Markell, U.S. Senator Tom Carper, DelDOT Secretary Shailen Bhatt and DNREC Secretary Collin O’Mara to mark the long awaited grand opening of the Pomeroy and Newark Rail Trail. The trail was ten years in the making and a result of the City of Newark’s partnership with several agencies including DelDOT, Delaware State Parks, University of Delaware, and DART. 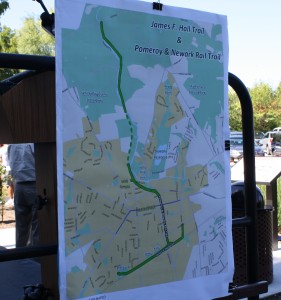 The two mile long trail, built along the former Pomeroy –Newark Rail Line, is unique in that it provides direct access to a commercial area – Main Street, the Newark Shopping Center, and the University of Delaware’s Laird Campus .The trail provides safe and convenient ways to reach businesses, parks, and transit. Providing an alternative means of transportation to the area is expected to have economic benefits as well by serving a diverse group of people including students and shoppers as well as runners, walkers, and bicyclists. Additionally, the two mile trail extends north through Newark into the White Clay Creek State Park and becomes another recreation corridor that will encourage more physical activity.

Making Delaware a healthier, more active, more vibrant and attractive place to live and work are critical elements of Governor Jack Markell’s Trails and Pathways Initiative, of which the Pomeroy and Newark Rail Trail is part. Trails and bike routes are essential elements of the initiative. Since July 2011, 9.1 miles of new trail have opened; 7.5 miles are under construction, and 17.3 miles are in planning and design. A vital outcome of opening trails such as the Pomeroy and Newark Rail Trail will be improved connections within communities and from community to community linking workplaces, schools, parks, libraries and businesses. In addition, there are nearly 12 million people who live within one hour of Delaware’s borders, in Maryland, Pennsylvania, New Jersey and Virginia. There is tremendous potential to boost trail tourism for both day visitors and overnight tourists as a result, in Newark and elsewhere.

“This trail offers Delawareans a chance to hike and bike and enjoy the outdoors while making our state more walk-able, bike-able and livable,” said Governor Jack Markell.  “Residents and visitors are gaining access to something that connects them to businesses, schools and leisurely destinations.  The trail recreationally benefits its users and economically benefits the larger community.”

“The Pomeroy and Newark Rail Trail has been over a decade in the making and its completion is all due to a collaboration of all levels of government,” said U.S. Senator Tom Carper. “The Federal Highway Administration provided $4.7 million for the design and construction of this trail. That, along with funding from the State and coordination between the City of Newark and WILMAPCO, has provided another safe and healthy way for walkers, runners and bikers to enjoy this community.”

City officials noted that discussion of the trail began as early as the 1990’s. In 2001, support began to grow with the Newark Bicycle Committee advocating the project. A feasibility study was funded by DelDOT and then a public workshop about the project was held in 2004. Funding was approved in the federal highway budget in 2005 for consecutive years through 2009 for $4.7 million for design and construction of the trail. DelDOT funded the purchase of the trail right of ways in 2006 for $2.6 million, and the value of those lands was used as the 20% required local match. Construction on the trail began in late August 2011.

“As we continue to rollout new trails and pathways statewide, we will be working with DNREC and others to provide a bicycle trail and pathway system that can live up to the excellence our citizens expect and visitors to our state admire,” said DelDOT Secretary Shailen Bhatt. 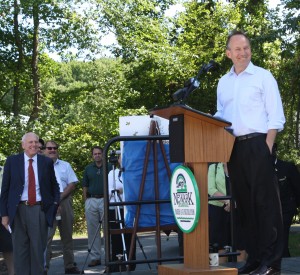 “It’s for this generation to connect our communities so that pedestrian and biking travel is possible and practical for the sake of good health, cleaner air, a stronger economy and quality of life,” said DNREC Secretary Collin O’Mara. “With the opening of Pomeroy and Newark Rail Trail something remarkable happens:  this section of the trail fills one of the critical gaps between existing trails and pathways that will eventually give the hiker, biker, and runner continuous and safe access to more than 75 miles of trails from the James Hall Trail into White Clay Creek State Park, and the Redd and Reservoir Parks, and the Middle Run Valley Natural Areas.”

“This is a great day for Newark,” said Newark Mayor Vance Funk. “As Mayor, I am filled with pride that Newark continues to make its mark by creating amenities that you do not find everywhere. I am happy to have the Pomeroy and Newark Rail Trail added to our already extensive trail system and the fact that we are able to make it safe and keep some of the history of the area for our children and grandchildren to enjoy are why Newark is such a great place to live.”

Video of the ribbon cutting can be viewed here: http://youtu.be/nq2zsY6Df-0