“Based on my experience working with Bob, as well as his extensive background, I am confident that he will be an asset to the work of the PSC,” said PSC Chair Dallas Winslow.

Howatt, a resident of Wilmington, has 28 years of utility management experience in roles such as Manager of Regulatory Affairs for the Maryland Energy Administration, Public Utilities Analyst III for the Delaware Public Service Commission, and Planner IV for the Delaware Department of Natural Resources and Environmental Control. Until 2000, Howatt worked for Delmarva Power in various managerial positions to include Manager of Distribution Assets, Manager of the Southern Division, and Manager of Construction and Engineering.

“Bob is an extremely qualified individual who can hit the ground running and play an important role in developing our state’s overall energy strategy,” said Secretary of State Jeffrey Bullock.

Howatt holds an MBA and a Bachelor of Science in Electrical Engineering. 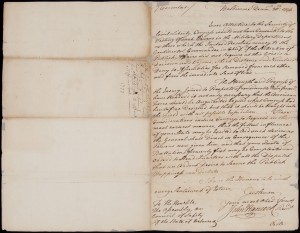 A letter that John Hancock wrote to the Delaware General Assembly in 1776 has been donated to the Delaware Public Archives by Newark resident Robert Barnes who found it in one of the books he purchased at an auction.

Hancock, who was then the President of the Continental Congress, wrote to request that Delaware send more men and supplies before the Battle at Princeton.

Although the document was in pieces, Barnes spotted the familiar signature of John Hancock. As a frequent researcher at the Delaware Public Archives, Barnes contacted the Archives for advice once he realized he had an important part of Delaware history.

“We thank Mr. Barnes for having contacted us after he found the letter,” said Secretary of State Jeffrey Bullock. “We will now be able to share this newly-acquired piece of Delaware history with the public.”

The letter, dated December 30, 1776,  was written by Hancock to the Delaware General Assembly during the critical days following Washington’s victory at Trenton. Hancock was requesting Delaware to send more men and supplies because of the “Strength and Progress of the Enemy.” On the reverse side of the letter, Hancock acknowledged the Trenton victory by noting: “I congratulate you on the success of General Washington in the Jerseys.” 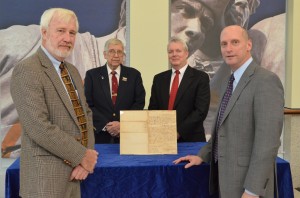 “The letter will become a permanent part of our Legislative Papers collection, and we are making plans to make it accessible online in the near future.” said State Archivist and Delaware Public Archives Director Stephen Marz.

“The letter is now where it belongs,” said Barnes.

The document was sent to the Conservation Center for Art and Historic Artifacts in Philadelphia where it underwent preservation, in preparation for its display at the Public Archives.

The Delaware Public Archives is one of the oldest public archives programs in the country. DPA holds more than 95,000 cubic feet of government records and historical documents. One of the missions of the Archives is to ensure access to public records for present and future generations of Delawareans.

DOVER – Governor Jack Markell announced today the state will be moving to ban the dangerous stimulants commonly known “bath salts” to make them illegal in Delaware as soon as tomorrow.

The Controlled Substances Advisory Committee will hold an emergency meeting Friday, September 30, at the request of the Secretary of State, who seeks to exercise his authority to issue an immediate ban on the drugs. Title 16, Section 4713, states the Secretary of State shall place a substance in Schedule I if that substance has high potential for abuse and has no accepted medical use in treatment in the United States or lacks accepted safety for use in treatment under medical supervision.

Secretary of State Jeffrey Bullock will be taking an unprecedented step to immediately ban these substances for presenting a clear danger to the public. He plans to exercise his emergency authority to ban three synthetic chemical compounds used to produce “bath salts.” Marketed under names such as “Ivory Wave”, “Purple Wave”, “Vanilla Sky” or “Bliss”, these products are comprised of a class of chemicals which can mimic the effects of cocaine, LSD, MDMA and/or methamphetamine.

“We have every reason to make these drugs illegal,” said Governor Jack Markell. “These drugs present a danger to public safety. They have no legitimate use and can cause incredible damage to the lives of the user and those around the user. Criminalizing the sale and possession of these designer drugs will hopefully reverse their rising popularity and get them out of the hands of potential abusers.”

This action will empower state law enforcement agencies to treat bath salts the same as other harmful illegal drugs, which means those who possess and, more importantly, those who sell bath salts will now face criminal penalties.

“Getting these dangerous substances out of stores and off the streets will make Delaware a safer place,” said Attorney General Beau Biden. “Bath salts are dangerous drugs that have no place in our communities.”

Bath salts have become increasingly popular, particularly among teens and young adults, and are sold at places like tobacco shops, gas stations and head shops. The drug can also be bought on the internet. The federal Food and Drug Administration has not approved these chemicals for human consumption or for medical use, and there is no oversight of their manufacture.

Recently discovered data on three of the chemicals used to produce “bath salts” – mephedrone, methylone, and methylenedioxypyrovalerone (MDPV) – demonstrate that they have a high potential for abuse and currently have no accepted medical use in the United States.

The Controlled Substances Advisory Committee meeting will take place at 1 p.m. at the Carvel State Office Building, Wilmington, 10th floor. Following the meeting, a news conference will be held at 2:00 p.m. in the Governor’s Office, 12th floor, with the Governor, Secretary of State, and Attorney General Beau Biden.