Do You Turn Into A Different Person Behind The Wheel? 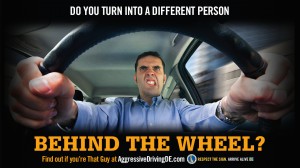 Dover – The Delaware Office of Highway Safety (OHS) wants to know if you turn into a different person behind the wheel as they launch the agency’s aggressive driving campaign for 2013.  The agency is building upon the brand “Respect the Sign” and reminding all drivers that aggressive driving is more than just speeding and is highlighting the other traffic behaviors drivers are likely to do such running stop signs, failing to yield, and changing lanes in an unsafe manner. The campaign will include high-visibility enforcement and awareness initiatives aimed at reducing aggressive driving-related traffic deaths.

OHS will conduct four 2-week mini waves of enforcement beginning May 7th and ending in September. Enforcement will be accompanied by outreach efforts focused on reducing aggressive driving related crashes.

OHS will conduct various public outreach and education activities including promotion of the website www.AggressivedrivingDE.com for individuals to take a quiz to find out what type of driver they are, learn about the violations & penalties for aggressive driving, and how to deal with ‘that guy’ if they encounter one on the road.  Life sized traffic signs with ‘that guy’ excuse for ignoring the sign, will also be placed at select partnering locations through the state, and a partnership with the University of Delaware cheerleading team to lead a “Don’t Be Aggressive” cheer demonstration. OHS will also partner with AAA to share the information with their teen driving campaign.

Delaware State Police in all three counties, along with the Dover, Middletown, New Castle County, Smyrna, and Wilmington Police agencies will be conducting aggressive driving patrols during the 4 waves of enforcement.  Police are being asked to focus on the top four aggressive driving violations in the State, with the primary focus on drivers who fail to grant the right of way to other drivers.  Failure to grant the right of way violations include drivers who turn left in front of another vehicle, pull out in front of other vehicles at stop signs and fail to merge safely.  It is also the primary contributing factor in aggressive driving related fatal and injury crashes.

New paid media messaging has been developed and will be incorporated throughout the 4 waves of enforcement including cable tv, print, media rich interactive online advertising, Pandora, static tv ads in all 4 DMV locations, along with posters, fliers, and table tents.

Individuals who are stopped under Delaware’s aggressive driving law can be charged both with aggressive driving and charged for each individual traffic offense.  Penalties include fines between $100 – $300 for a first offense, 6 points on your license, possible jail time, and mandatory attendance at an 8-hour behavior modification course.  The 2012 “Respect The Sign” campaign resulted in 3,120 citations being issued for aggressive driving behaviors and 30 individuals arrested for Aggressive Driving.