Dover, DE-  As motorists take to the roads this Memorial Day holiday, law enforcement officers from Delaware, Maryland, New Jersey, and Pennsylvania will be out in full force, taking part in the 2014 national Click It or Ticket seat belt enforcement mobilization and cracking down on motorists who are not belted.

Today, May 19th, officers from Delaware State Police, Delaware River and Bay Authority, Maryland State Police, New Jersey, Pennsylvania State Police, Selbyville PD, and Worcester County Sheriff’s Department will be teaming up and joining forces to mobilize the Click It or Ticket (CIOT) “Border to Border” enforcement operation from 6:00 p.m. to 10:00 p.m.  Agencies will be providing increased seat belt enforcement at border sites sending a ‘zero tolerance’ message to the public: Driving or riding unbuckled will result in a ticket, no matter what State.  A total of eleven states are participating along the northeast including Connecticut, Delaware, Maryland, Massachusetts, New Jersey, New York, Pennsylvania, Rhode Island, Vermont, Virginia, and West Virginia.

“Seat belts save thousands of lives every year, but far too many motorists are still not buckling up, especially at night when the risk of getting in a crash is even greater,” said Colonel Richard Arroyo of the Delaware River and Bay Authority police department.  “We want to make this the safest summer possible. Buckling up is not optional; it’s the difference between life and death in a crash.  That’s why we’re out here enforcing the law.  Click it or Ticket, every time, day or night.”

At a press event held earlier today at the Delaware Memorial Bridge to announce the Border to Border enforcement operation, National Highway Traffic Safety Administration (NHTSA) representatives from Region 2 (PA, NJ), Region 3 (DE, MD), and a crash survivor stressed the Click It or Ticket campaign message to buckle up day and night.

NHTSA Region 2 Administrator, Tom Louizou focused on drivers most at risk across the nation, “Our younger motorists—young men in particular—are most at risk.  62 percent of those killed in crashes were NOT buckled up—the highest percentage of any age group”, said Louizou.

Elizabeth A. Baker, Ph.D, NHTSA Region 3 Administrator commented on when most unbelted crashes happen.  “Most law-abiding citizens have gotten the message to buckle up. But the same is not true for nighttime drivers and passengers”, said Baker.  “Of those killed in nighttime crashes in 2012, 62% – two out of three – were not wearing their seat belts.”

Firsthand experience of what could happen to a person when involved in a unbelted crash was shared by Chris Weersing of Pennsylvania.   Chris was driving with a friend and involved in a single vehicle crash in 2005.   The friend was wearing a seat belt and hit his head on the windshield, Chris was not wearing his seat belt and his head hit a tree.  His friend walked away with a minor concussion, Chris was in a coma and not expected to recover.  Today Chris lives with the effects and injuries of an unbelted crash including traumatic brain injury, memory loss, and having to re-learn daily living activities.

Delaware law requires drivers and all passengers, including those in the back seat, to wear a seat belt.  An officer can pull over a driver if he sees any person in the vehicle not wearing a seat belt, even if there is no other violation. The ticket, which goes to the driver no matter who is unbuckled in the vehicle, totals $83.50.

In 2011, seat belts saved an estimated 11,949 lives nationwide according to NHTSA. While this year’s Click It or Ticket enforcement mobilization runs from May 20 through June 2, officers are out enforcing seat belt laws year-round. 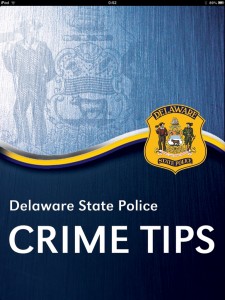 Dover- The Delaware State Police and Delaware.gov in conjunction with Delaware Interactive, LLC have just launched a new mobile Tip Line application on both Android and iOS platforms.  Troopers receive crime tips from various sources: email, a toll-free hotline, and an online submission through its website.  The new Mobile Tip Line provides an additional, convenient, method where anyone can submit a crime tip straight from their mobile device.

You can learn more about the DSP by visiting http://dsp.delaware.gov/.  The app is free to both Android and iOS users and available for download at https://delaware.gov/apps/

The DSP Tip Line application provides a mobile solution for accepting crime tips allowing users to report information such as location, activity description, subject description, vehicle description, and even a photograph.  The user also has the option to submit anonymously.  All crime tips are passed directly to the DSP team via an email to preapproved recipients.

Apart from the mobile application, anyone who wishes to submit a tip may do so by calling the toll-free number 800-TIP-3333, emailing the DSP directly at crimestoppers@delaware.gov or by submitting an online form located at https://www.tipsubmit.com/WebTips.aspx?AgencyID=346

“The Delaware State Police continue to utilize technology as a force multiplier to combat and solve crime,” said Sergeant Paul G. Shavack, Director of Public Information for the Delaware State Police. “By the use of smart phone technology, we want to make it as easy and convenient as possible to provide anonymous tips on crimes and criminal activity. When the public becomes involved and provides crime tips, it helps keep their communities safe.”

This mobile application responds to the administration’s eGovernment directive for enhanced citizen access.  “We’re committed to creating new and convenient eGovernment tools for Delaware,” said Greg Hughes, Director of the Delaware Government Information Center (GIC), which leads eGovernment efforts in the First State. “Delaware Governor Jack Markell has directed us to look for ways to make government more efficient, effective and open; mobile apps and eGovernment tools like this one will help us meet that goal.”