DNREC and FEMA are partnering to improve flood risk mapping of Bundicks Branch, west of Lewes in Sussex County

The Delaware Department of Natural Resources and Environmental Control is conducting a floodplain mapping study for Bundicks Branch in Sussex County and encourages the public to learn more about the upcoming mapping changes at https://de.gov/bundicksbranch. Comments and questions about the Bundicks Branch mapping study can be submitted online, with more information about floodplain mapping and flood insurance also found there.

The Bundicks Branch study is an example of DNREC’s Division of Watershed Stewardship partnering with the Federal Emergency Management Agency (FEMA) to improve the accuracy of flood risk maps statewide through a Cooperating Technical Partnership. Current flood risk maps for Delaware can be viewed at www.de.gov/floodplanning.

“DNREC and its consultant are performing updated watershed modelling to produce more detailed and accurate flood risk assessments and maps for the Bundicks Branch watershed,” said Michael Powell, DNREC Shoreline and Waterway Management section administrator. “This improved study and map will ultimately be adopted by FEMA to produce updated federal floodplain maps for this watershed.”

Standard homeowners insurance does not cover damage caused by flooding, but all property owners and renters can buy flood insurance. Homeowners interested in how the proposed changes could impact the cost of their flood insurance premium should contact their insurance agent.

More information about Delaware’s floodplain management program can be found on the DNREC website.

About DNREC
The Delaware Department of Natural Resources and Environmental Control protects and manages the state’s natural resources, protects public health, provides outdoor recreational opportunities and educates Delawareans about the environment. The DNREC Division of Watershed Stewardship develops and implements innovative watershed assessment, monitoring and implementation activities. For more information, visit the website and connect with @DelawareDNREC on Facebook, Twitter or LinkedIn.

Delaware Has Preserved 143,000 Acres of Farmland After 25th Round 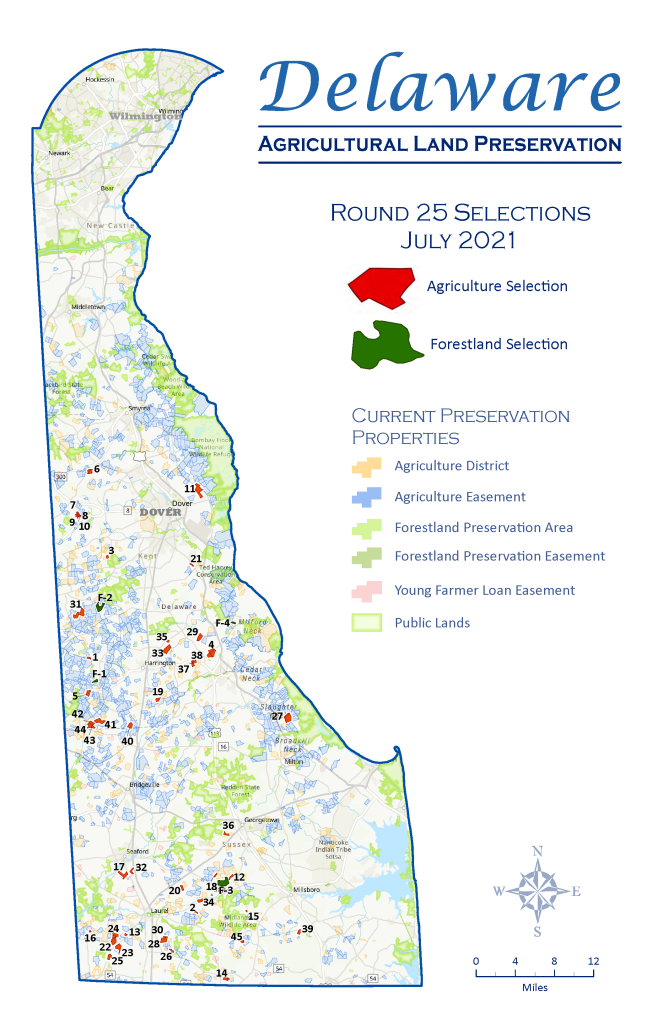 DOVER, Del. (July 21, 2021) — Delaware announced its 25th consecutive round of easement selections by the Delaware Agricultural Lands Preservation Foundation. With the preservation of 3,695 acres, Delaware has permanently preserved more than 143,000 acres of farmland for future generations.

“Delaware’s Aglands Preservation Program has been critical to keeping our farms in production,” said Governor Carney. “We can all agree through the pandemic we learned how important family farmers are to ensuring food including fruits and vegetables, dairy products, and meat are readily available. Preserving farmland is not just about passing a farm down to the next generation. It’s about making sure future generations have food grown locally available to feed their families.”

In this round of easement selections, there were 23 farms in Kent County and 22 farms in Sussex County preserved. The Delaware Aglands Preservation Program has successfully preserved nearly 27 percent of Delaware’s farmland.

“We take pride in having one of the country’s most effective farmland protection programs. With today’s announcement, 3,695 acres have been permanently preserved, including 45 farms through the AgLands Preservation Program and four forested parcels through the Forestland Preservation Program,” said Delaware Secretary of Agriculture Michael T. Scuse. “There are a lot of partners who play a role in Delaware’s success preserving farmland, from the county level up to federal agencies by providing matching funds.”

The Delaware Agricultural Lands Preservation Foundation selects those farms approved for easement purchase using an impartial discounted ranking system that maximizes benefits for taxpayers. The Foundation does not own the land but instead purchases landowners’ development rights and places a permanent agricultural conservation easement on the property. Landowners must first voluntarily enroll their farm into a 10-year preservation district before they can sell an easement. In addition to more than 143,000 acres in permanent easements, Delaware’s Aglands Preservation Program has over 41,000 acres of land enrolled in farmland preservation districts.

County governments can choose to partner with the state program and add county funds to select properties in their areas, leveraging state resources for a more significant impact.

Kent County Administrator Michael Petit de Mange said, “Levy Court is pleased to once again provide financial assistance toward the preservation of an additional 1,082 acres of valuable farmland in Kent County as part of the Delaware Aglands Preservation Program in Round 25. It’s important for us to preserve and protect agriculture in Kent County since it’s so vital to our local economy, our food supply, and the rural character of our working lands in Central Delaware.”

“Sussex County Council has made it a priority to support the Delaware Aglands Program by providing significant funding to ensure working farms are preserved,” Sussex County Administrator Todd F. Lawson said. “Ag continues to face tremendous pressure in the 21st century, and it is imperative that we take necessary steps — like purchasing these easements — to ensure this vital industry remains productive in our State and our County.”

The Delaware Agricultural Lands Preservation Foundation Easements are available for viewing through an online dashboard at https://de.gov/agdashboard.

The Delaware Department of Natural Resources and Environmental Control will hold a virtual information session on Wednesday, July 28 to discuss the upcoming White Creek maintenance dredging project in Sussex County. The public meeting will be held from 5 to 6:30 p.m. via Zoom. More information about the project and the link to join the meeting can be found at de.gov/dnrecmeetings.

Since White Creek was last dredged in the early 2000s shoaling has increasingly impacted navigation in the waterway that connects Indian River Bay to the Assawoman Canal, and ultimately Little Assawoman Bay. The project is currently in the design phase and an alternatives analysis is also underway to identify suitable beneficial uses for dredged material generated by the project to restore and enhance coastal wetland areas close to the waterway.

Facilitated by the Shoreline and Waterway Management section within the DNREC Division of Watershed Stewardship, the virtual meeting will provide information about its waterway management program, and an update on the progress of the White Creek project design and current project schedule. Interested parties are encouraged to submit questions in advance of the public information session. Meeting attendees can also provide comments and ask questions about the proposed project during the meeting.

About DNREC
The Delaware Department of Natural Resources and Environmental Control protects and manages the state’s natural resources, protects public health, provides outdoor recreational opportunities and educates Delawareans about the environment. The DNREC Division of Watershed Stewardship develops and implements innovative watershed assessment, monitoring and implementation activities. For more information, visit the website and connect with DNREC on Facebook, Twitter or LinkedIn.

DOVER, Del. (July 2, 2021) – The Delaware Department of Agriculture is warning all residents about two deadly species of hemlock recently found in Sussex County. Environmental scientists have confirmed the presence of poison hemlock (Conicum maculatum) and spotted water hemlock (Cicuta maculata). All parts of the plants – leaves, stems, flowers, and roots – are poisonous to humans and animals.

Both hemlocks are in bloom from June through August. As members of the wild carrot family, both plants have small white flowers in umbrella-like groupings. People may mistake these plants for wild carrot, commonly called Queen Anne’s lace, or wild parsnip or wild celery. People who like to forage for natural foods or cut wildflowers are advised to avoid wild carrot-looking plants to prevent the possibility of being poisoned.

Both the poison hemlock and spotted water hemlock were found in wetland areas in Sussex County.

Poison hemlock is also known to grow in ditches, meadows, pastures, and the edges of cultivated fields.

Poison hemlock is an invasive biennial that grows from six to eight feet tall. The stems are hairless and have purple blotches. The plant emits an odor, but people should not crush any part of the plant to smell it because toxic alkaline oils can be released, poisoning the person. Leaves are alternate, dark glossy green, fern-like, triangular, lacey with veins running through the tips of the leaf serrations.

Native to Europe, northern Africa, and western Asia, poison hemlock was introduced into the United States in the 1800s as an ornamental garden plant.

Spotted water hemlock is a native plant that grows up to six feet tall. The stems can vary in color from solid green or purple to green with purple spots or stripes. The leaves are lacey and fern-like, with veins ending at the base of the notch of the leaf edge.

If residents suspect they have found either of these plants, take a picture and email it to DDA.Marketing@delaware.gov for identification.

Residents should not try to eradicate these plants themselves. Residents should find a licensed aquatic pest control company at https://de.gov/pesticides to treat for poison hemlock or spotted water hemlock. It is recommended that people wear long sleeves, long pants, and gloves when working with these toxic plants and with any unknown plant life in general. The sap can cause skin irritation or a rash in some people, and others may experience serious illness. Mowing the plants is not recommended because toxic particles can be released and inhaled in the air.

Depending on the exposure – direct contact, ingestion, and inhalation – signs and symptoms of poisoning by spotted water hemlock and poison hemlock in humans can appear as soon as 15 minutes to hours and can include nausea, vomiting, diarrhea, stomach pain, irregular heartbeat, dilation of the pupils, respiratory distress, muscle damage, renal failure, and central nervous system involvement causing seizures, with potential for death.

If a person may have ingested either of these plants or cut one of the plants inhaling the toxic particles, call the Poison Control Center at 1-800-222-1222 or 911.

The identification and eradication of these plants are crucial in meadows and fields where livestock and horses graze. If any part of the plant is ingested, toxicity can occur in animals. All classes of livestock are susceptible to poison hemlock. Ingestion of the plant may lead to death within just 2-3 hours, depending on the amount consumed. Fresh leaves of poison hemlock are unpalatable to animals, so livestock and horses seldom eat hemlock if other feed is available.

Clinical signs in livestock usually begin within 30-60 minutes after ingestion. There is no antidote. When animals ingest the plant, the toxin affects nerve impulse transmission to the muscles, and animals die due to respiratory failure. Animals often will be found dead before the illness is determined.

“We are seeing an increase in positive COVID-19 cases here and Delaware and across the country,” said Governor Carney. “We are less than two weeks away from Thanksgiving. It’s important you reconsider hosting in-person gatherings with people outside your immediate household. It’s also critical we continue to practice the basic public health measures that we know work to reduce the spread of COVID-19. Avoid gatherings with those outside your household. Keep wearing a mask in public. Wash or sanitize your hands frequently. Please consider getting a free test—whether you have symptoms or not. Testing for COVID-19 is the best way to track the spread of this virus and contain potential outbreaks.”

DEMA has coordinated community sites this week in addition to permanent testing sites at Walgreens and at various hospitals and health care locations. Delawareans can view a full list of COVID-19 testing locations and reserve a spot at de.gov/gettested. Site details will be added this weekend.

Delawareans are encouraged to check the Delaware Department of Health and Social Services’ social media accounts (Facebook, Twitter, and Instagram) for testing location updates due to inclement weather.

Anyone with a question about COVID-19, whether related to medical or social service needs, should call Delaware 2-1-1. Individuals who are deaf or hard of hearing can text their ZIP code to 898-211. Hours of operation are 8 a.m. to 9 p.m. Monday through Friday; 9 a.m. to 5 p.m. Saturday and Sunday.

Report a business for COVID-19 non-compliance using this form.

DPH will continue to update the public as more information becomes available. For the latest on Delaware’s response, go to de.gov/coronavirus.