“We’ve seen a significant surge in COVID-19 cases in communities across Sussex County,” said Governor John Carney. “This new testing program is designed to save lives. Over the next week, we will be partnering with local hospitals, the Delaware Division of Public Health, the Delaware Department of Health and Social Services, the Delaware Emergency Management Agency, and the Delaware Department of Agriculture, and others to offer free, rapid coronavirus testing at community testing sites in Sussex County. As the largest employers in Sussex County, we are partnering with the poultry industry to ensure that workers and their families get all of the information they need to be safe and healthy.”

The community testing plan is a three-pronged effort. It includes testing through the use of rapid test kits and ensuring access to care; guidance on isolation and assistance when it is not possible to isolate safely; and education and outreach through the assistance of trusted community partners. Individuals will receive “care kits” with essential materials including hand sanitizer, bandanas, thermometers, and educational materials. Educational materials are being translated into Spanish and Haitian Creole to reach those who do not read English as their first language. These tests are not mandatory.

“We are grateful for the partnership of everyone involved in bringing this massive effort together,” said DPH Director Dr. Karyl Rattay. “In addition to testing sites at poultry plants, there will also be community testing sites, which we expect will reach workers in other industries and their families. We believe this community-based testing strategy will be critical in identifying the extent of the spread of COVID-19 and of mitigating it, by providing guidance and support for those with positive test results and educational materials for everyone tested.”

“The efforts of all these partners to stop the spread of COVID-19 in our rural communities here in Sussex County is a testament to working towards a common goal to re-open our state. From the farmers to the workers in the plants to employees in agribusinesses, our workforce is the backbone that makes agriculture so successful in Delaware,” said Secretary of Agriculture Michael T. Scuse. “We want to ensure that every employee gets the care they need, and to make sure if a staff member does have COVID-19 that we can stop it from spreading to others. We appreciate the efforts that the poultry companies are taking to protect their employees, including implementing physical barriers and social distancing protocols, daily health screenings, and now on-site testing.”

Partners in the community testing efforts include:

Delawareans with questions about COVID-19, related to medical or social service needs, should call 2-1-1; or 7-1-1 for individuals who are deaf or hard-of-hearing. Hours of operation are 8 a.m. to 9 p.m. Monday through Friday; and 9 a.m. to 5 p.m. on the weekends. Questions may also be submitted by email at DPHCall@delaware.gov.

DPH will continue to update the public as more information becomes available. For the latest on Delaware’s response, visit: de.gov/coronavirus.

DelDOT announces that several projects in the Rehoboth Beach and Dewey Beach Corridor will be resuming or beginning construction as peak travel season concludes. The majority of the work will be taking place on SR 1 and includes:

Signs and message boards will be posted throughout the area alerting motorists to the lane closures and shifts as a result of this work.

Wilmington, DE – With moderate to major coastal flooding expected at high tides today and tomorrow, along with high wind warnings along the coast, Governor Jack Markell has issued a Limited State of Emergency for Sussex County, effective immediately.  State offices will remain open and no driving restrictions are being implemented, however localized road closures may occur as conditions warrant it.  See full text below.

Residents of flood-prone areas of Sussex County and throughout Delaware are at risk of significant flooding and residents of those areas should seriously consider taking precautionary measures, including evacuating voluntarily or planning for potential evacuation and use of travel routes around flooded streets and roads.  A list of flood-prone areas is included below.

“Though predicted rainfall totals have dropped and the expected path of Hurricane Joaquin remains well off-coast, high winds and coastal flooding will significantly impact Sussex County,” said Governor Markell. “State and local officials are taking the necessary steps to prepare for possible evacuations and road closures and the National Guard has been deployed to Kent and Sussex Counties to support those efforts, as needed. Residents in flood-prone areas of the state should prepare accordingly and continue to monitor communications from state and local agencies for updates.”

Areas within ¾ of a mile of the coast in the following communities: 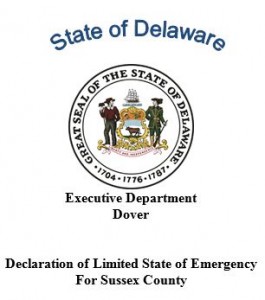 WHEREAS, as of Friday, October 2, 2015, a Nor’easter system has affected the State of Delaware and is projected to continue to impact the State as Hurricane Joaquim moves north and interacts with the system, and

WHEREAS, rain and high tides from that system have resulted in flooding conditions in Sussex County, Delaware; and

WHEREAS, weather conditions throughout Sussex County and continuing for the remainder of the week and into the weekend may continue to exacerbate said flooding; and

WHEREAS, the effects of this storm system threaten public safety and have the potential to cause major damage to the infrastructure of Sussex County; and

WHEREAS, based upon evidence presented to me by the Delaware Emergency Management Agency, I have found that the potential for the occurrence of an emergency is high in Sussex County; and

WHEREAS, flood-prone areas of Sussex County and throughout Delaware are at risk of significant flooding, and residents of those areas should seriously consider taking precautionary measures, including evacuating voluntarily or planning for potential evacuation and use of travel routes around flooded streets and roads; and

WHEREAS, it is necessary to pre-stage and potentially deploy resources and assets of the Delaware National Guard in anticipation of responding to any such threats to public safety;

NOW THEREFORE, I, JACK A. MARKELL, pursuant to Title 20, Chapter 31 of the Delaware Code, do hereby declare a Limited State of Emergency for Sussex County, Delaware.  This Limited State of Emergency is effective on October 2, 2015, as of 12:00 p.m.  The nature of the emergency is flooding and its potential effects caused by the storm beginning October 1, 2015, and continuing thereafter.  Along with such other actions authorized by Title 20, Chapter 31 of the Delaware Code, I specifically direct and authorize:

Chip Guy of the Sussex County Emergency Operations Center in Georgetown, Delaware, issues a video update as Hurricane Sandy comes ashore near the mouth of the Delaware Bay.